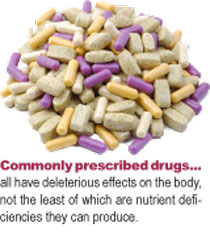 An important part of every case history, and even ongoing case notes, should be knowledge of the patient’s prescription and over-the-counter drug use. This has always been important because drugs mask symptoms and physical findings that are important in making an accurate assessment of the need for chiropractic care.

However, at the dawn of the 21st century, prescription drug abuse is rapidly becoming epidemic.

Consider the findings of a recent survey conducted by USA Today, the Kaiser Family Foundation, and the Harvard School of Public Health of 1,695 individuals taken in January of this year:

• One third of Americans were prompted to ask their doctor about a drug they had seen advertised.

These figures show an increase in patient requests for prescription drugs from 2005 when 75 percent of those requests were being granted. The president of the Kaiser Foundation stated that the survey shows that advertising of drugs is very effective. Substantiating this view is the fact that drug companies spent a whooping 4.8 billion dollars for advertising in 2006 as compared to $2.6 billion in 2002.

The study found that Americans are evenly divided on their opinion of the pharmaceutical industry:

• Forty-seven percent have a favorable impression of drug companies;

• Forty-four percent have an unfavorable view, citing high prices and large profits, as well as corporate greed as the basis for their opinion.

Extensive advertising of prescription drugs began in 1997 after the pharmaceutical industry spent an unspecified amount of money for four years (1994 to 1997) encouraging congress to “modernize the Food and Drug Administration.” Previously, it would have been necessary to list almost the entire content of the Physicians Desk Reference for each drug advertised. There were probably two reasons for the change in marketing direction. First, it was becoming increasingly obvious that the pharmaceutical companies were rewarding individual doctors and hospitals for using their products and many thought this unethical. Second, by the late 1980’s, it was being reported that more Americans were visiting non-medical practitioners than medical doctors.

In 1994, The New England Journal of Medicine published the results of a study by DM Eisenberg, that identified ten conditions that Americans were willing to pay for—out of their own pockets—because the sick care provided by their health insurance providers was ineffective. Those conditions were:

All of the above are symptoms and not considered pathological or, at least, disease entities.

I would like the reader to know that other articles like this one will appear bi-monthly in The American Chiropractor and will not be taking an anti-pharmaceutical position; rather, the emphasis will be pro-chiropractic and how your patients’ prescriptions are affecting your clinical findings and even perpetuating structural problems. I would like to bring to your attention what I believe to be critical points concerning the use of all pharmaceutical drugs, either prescriptive or over-the-counter:

• Commonly prescribed drugs work by either blocking receptor sites or interfering with a human enzyme system.

• Therefore, they all have deleterious effects on the body, not the least of which are nutrient deficiencies they can produce.

• They do not restore normal function, nor can they maintain health.

• Drugs provide great benefit for the public when used for the treatment of disease. But, when used for symptoms only, no objective tests are performed to determine which patients will suffer their known side effects.

• The targeted symptom or condition;

• Drug-class being advertised and brand names;

• The known side effects;

• Reported nutrient deficiencies produced, if any;

• Possible visceral (functional) dysfunction and perpetuation of a structural disorder and/or subluxation pattern—this is what I refer to as 2nd Factor in Chiropractic.

Restless Legs Syndrome is described as a disorder in which a person experiences vague, unpleasant, seldom painful, but always very annoying, sensations in the legs, such as creeping, crawling, and tingling. These sensations occur anywhere from the thigh to the ankle. One or both legs may be affected and, for a small percentage, the sensations may also be experienced in the arms. The symptoms usually occur when the person lies down or sits for prolonged periods of time, such as at a desk, riding in a car, or watching a movie.

There are no laboratory tests to diagnose RLS and no physical examination findings are indicated in the literature for determining the presence or cause of RLS. Recommendations for a drug are based solely on the following symptoms:

• An urge to move the legs usually accompanied or caused by uncomfortable and unpleasant leg sensations;

• Symptoms begin or worsen during periods of rest or inactivity such as lying or sitting.

These symptoms can be partially or totally relieved by movement such as walking or stretching, at least as long as the activity continues. Since movement relieves the symptoms, it is commonly reported that the symptoms only occur or are worse at night.

Drug-class being Advertised and Brand Names

Orally administered dopamine agonists are being widely advertised for symptomatic relief of RLS. In pharmacology, an agonist is a substance that binds to a specific receptor and triggers a response in the cell. It mimics the action of a neurotransmitter or hormone that binds to the same receptor. Since anogists are useful in replacing the neuron-transmitter dopamine, these drugs are also used in the treatment of Parkinson’s disease. While the patho-physiology of both Parkinson’s and RLS is unknown, neuro-pharmacological evidence suggests a primary presynaptic system involvement.

The most commonly advertised dopamine agonists are RequipTM (ropinirole hydrochloride) and MirapexTM (pramipexole dihydrochloride). The medication most studied for RLS is oral levodopa combined with a dopa decarboxylase inhibitor (carbidopa or benserazide). The dopa decarboxylase (an enzyme) component prevents the peripheral conversion of levodopa to dopamine. Thus, more levodopa is available to cross the blood/brain barrier.

Studies have shown that these drugs have helped some people control or improve their symptoms. Although they may seem to help at first, later, in some people, these medicines make symptoms worse by a process called augmentation. Because this undesired outcome is most associated with regular use of levodopa, most patients who require daily medicine will need a dopamine agonist.

Side Effects in Healthy Subjects

The most common side effects in clinical trials for RLS were nausea, headache, and tiredness. Studies indicated the drug has little or no effect on blood pressure or pulse rate when lying down. But, upon standing, they produce a drop in blood pressure, both the systolic and diastolic. These changes are accompanied by lightheadedness upon arising, general fatigue, inability to tolerate stress, and a slow, weak pulse rate.

Patients treated with dopamine agonists have reported falling asleep while engaged in activities of daily living, including the operation of motor vehicles, which sometimes resulted in accidents.

Patients and caregivers should be informed that impulse control disorders and compulsive behavior may occur, including hallucinations and exaggerated urges for sex and gambling.

Gastrointestinal side effects of dopamine agonists directly affect your patients. These include:

Have you ever thought of Restless Legs as a chiropractic deficiency? In my opinion, RLS should be considered a chiropractic specialty, since patients who experience its frustrating symptoms invariably have chronic sacroiliac subluxations that can be caused by many mechanical or structural problems: fallen arches, Morton’s Syndrome (long second toe), knee cartilage damage, and an anatomical short leg, just to mention a few.

Recommend the patient change chairs at work or in the car. One of the most common causes of RLS is sitting in a recliner at home.

Howard F. Loomis, Jr., DC, President of Enzyme Formulations®, Inc., has an extensive background in enzymes and enzyme supplementation. As president for fi fteen years of 21st Century Nutrition® (now the Loomis Institute® of Enzyme Nutrition), he has forged a remarkable career as an educator, having conducted over 400 seminars to date, in the United States and internationally, on the diagnosis and treatment of food enzyme deficiency syndromes. Dr. Loomis welcomes your comments or questions through the Loomis InstituteTM at 6421 Enterprise Lane, Madison, WI 53719 or by phone at 1-800-662-2630.