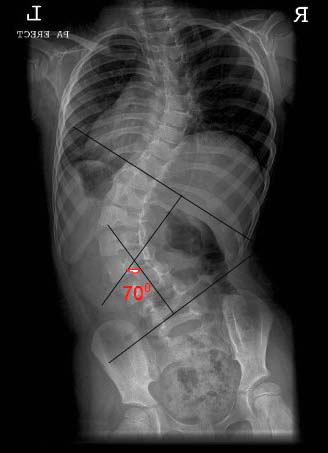 :dropcap_open:C:dropcap_close:obb angle should not be the Gold Standard for radiographic evaluation of scoliosis. While Cobb angle has been the subject of numerous reliabilitystudies, there are several disadvantages to be noted. These disadvantages range from high inter-examiner variability to lack of validity. Cobb angle is oftentimes only as good as the film it is drawn upon. There are various alternative methods that involve measuring the Cobb angle, as well as its rotational component. Since chiropractors are particularly focused on obtaining radiographic evidence of treatment success, the profession at large should use radiographic analytical methods that provide more information on the presenting three-dimensional spine and spinal disorder.

Scoliosis is classically described in the literature as a curvature of the spine greater than 10 degrees on radiographic study. This measurement is taken using a Cobb angle, a measurement first illustrated decades ago in an effort to quantify scoliotic curvatures and the progression or correction thereof. Classically, the Cobb angle has been the gold standard for assessing spine curvatures, both in the sagittal and coronal planes. While this measurement has remained through the decades as the chief outcome assessment in scoliosis, this measurement has both a high degree of variability and virtually no validity. It provides no information on segmental or global spinal function, it gives little insight as to the risk of curve progression, it does not correlate to any subjective outcome, and it provides only two-dimensional information about a three-dimensional spine, hence failing to account for vertebral rotation. Since there are other newer methods to evaluate spine structure which have a higher degree of reliability, we will discuss our opinion in this article that the Cobb angle should be abandoned for scoliosis radiographic evaluation.

Cobb angle has been the subject of numerous reliability studies. From an intra-examiner standpoint, a single practitioner’s Cobb angle will vary anywhere from 2-5 degrees, depending upon whether the image is a plain-film radiograph, CT, or MRI study. The inter-examiner variability is unfortunately much higher, approximating 20 degrees or higher in some studies. Aside from the high degree of measurement variability, even the best Cobb angle measurement is only as good as the film it is drawn upon. Weinert demonstrated changes in anatomical measurements with only small incremental changes in patient positioning in radiographic practice models used in chiropractic colleges. In this study, ten degrees of rotation, for example, caused a six millimeter change in the width of the sacrum, as well as a six millimeter difference between the heights of the femur heads. One can predict the difficulty in repeating an X-ray of a scoliosis patient with a marked degree of pelvic rotation, which creates a significant amount of projectional distortion. :quoteright_open:Classically, the Cobb angle has been the gold standard for assessing spine curvatures, both in the sagittal and coronal planes.:quoteright_close: Moreover, scoliosis radiographs are best taken with the central ray located at the level of scoliotic apical vertebra. This helps create a single point of origin from which to measure future comparative studies on full-spine 14″x36″ radiographs. Since this method fails to account for issues such as pelvic positional changes on subsequent studies, a full-spine film lends to high variability, even when Cobb angle is drawn with 100% reliability. Another disadvantage of using the Cobb angle to evaluate scoliosis is its lack of validity. Many signs and symptoms of scoliosis, such as reduced pulmonary function, may be related more to the rotational displacement caused by scoliosis compared to any lateral bending component. Cobb angle, however, does not account for spine rotation, since it is purely a two-dimensional measurement. To accommodate for these pitfalls, additional forms of measurement have been created, such as the scoliometer, and Nash-Moe and Perdriolle measures of vertebral rotation. By contrast, surgeons report significant reductions in Cobb angle measurements following spinal arthrodesis. Despite these reported corrections, as many as 40% of these patients will be classified as permanently disabled as a result of the surgery, yet the Cobb angle is reduced.

Scoliosis is a multi-dimensional disorder. Biomechanically, scoliosis is a three-dimensional deformity of the spine. However, the radiographic Cobb angle measurement only provides two-dimensional information. This, in and of itself, should make the measurement obsolete, given the availability of other published radiographic methods such as those outlined here. Use of a Cobb angle, especially on full-spine radiographs, assumes that the patient placement on a full-spine film is consistent from pre- to post-treatment studies. Since chiropractors are particularly focused on obtaining radiographic evidence of treatment success, the profession at large should use radiographic analytical methods that provide more information on the presenting three-dimensional spine.