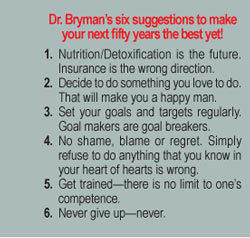 Fifty years ago, when Dr. Lester Bryman began his career, he felt like he was the only practitioner in his field that thought or talked about a nutrition oriented practice: No one he knew ever wondered about the therapeutic value of eating, let alone that whole foods (non-processed products) were healthy and non-foods were bad.

In 1959, he moved into his first small office in the Bronx, which he shared with his older brother, Dr. Larry Bryman. Together, they practiced straight chiropractic. It was simple and straightforward. People came in. They got an adjustment. They came back. They got great results…and he experienced many miracles. But he still felt something was missing.

One afternoon—he remembers the exact moment—he made a decision to introduce nutrition into his practice. “I was looking at two identical cases,” he said. “One was doing great and the other was very similar—but with no results at all.

“I questioned both patients. One ate only really good foods. The other was on a diet of soda, candy, cake, and ice cream, etc. I thought, no wonder no results. So I got the sugared-up patient to gradually cut the sugar out of his diet, and the positive results came right alongside.”

Bryman applied this simple solution to all his cases that were failing or not moving ahead fast enough. Almost all started to improve.

In 1968 he found the key: Combining Nutrition and Chiropractic

In 1962, Bryman added Parker Chiropractic Procedures to his practice. “Simply put,” he said, “Parker showed me how to present a report of findings to my patients which gave them a choice of treatments; they chose one which they would agree to do and, then, they’d get well.”

That simple procedure boomed Bryman’s office. In 1965, he bought a beautiful building down the street which was set up to see a hundred people a day, very easily. He was still doing straight chiropractic, still no insurance cases, and still intensely interested in nutrition.

However, Bryman began to see a problematic pattern in the chiropractic preventive care he was providing. During the first decade of his practice, his adjustments helped his patients; almost one for one made excellent gains. But, by 1968, it became obvious to Dr. Bryman that preventive chiropractic care was becoming less effective. The adjustments would not hold quite as well as they did years earlier. He knew that there was something missing, and he was certain that combining nutrition and chiropractic was the key.

In 1967, Bryman opened another practice in White Plains, New York. He was still a straight chiropractor, but was always seeking to learn from other successful chiropractors who were older and wiser. He noticed a common thread: They all had a prepayment system that required their patients to buy a package of care (basically offering twelve visits for the price of ten). This plan allowed the patients enough time and opportunity to get real results—and, by doing so, Bryman discovered he now had time to help his patients with their diets. His practice boomed.

By 1978, Solutions Were Revealed: Helping the Body Heal Itself

In 1970, Bryman attended his first nutritional-chiropractic seminar, Dr. Herbert Anderson’s Applied Kinesiology. He said, “I was very impressed with the theory and application of muscle testing and experienced personal gains as well. The instructor noticed that I had a sty in my right eye. He gave me three Thymex tablets from Standard Process,” the company he still uses to this day. “He asked if I would take them for my sty and report back to him the next day.

“My sty had been there for three months and I really did not expect that it would go away in one day. However, it disappeared in 24 hours, just from taking the exact right nutritional product. Well, that really got my attention and, from that moment, I never looked back. I knew I was on the right path.”

By 1988: Working with the Technology of Nutrition Response TestingSM

Bryman sold his White Plains office, gave his Bronx office to his older brother as a gift, and sought to work with the very best in the field. George Goodheart, DC, and Dr. Herbert Anderson, DC, both outstanding Applied Kinesiologists, shared their knowledge openly; Frederick Keck, DC, taught Bryman about upper cervical technique. He met Dr. Herbert Smith, DC; Dr. Ray Behm, DDS; and Dr. Freddie Ulan—the one individual who has taught him the most. Together, he and Dr. Ulan set up a practice in Glen Falls, NY, where they developed Nutrition Response Testing.

Bryman describes Nutrition Response Testing as “a system that any clinician can learn and apply with great results. It is completely duplicatable. It identifies ‘neurological switching’ and ‘blocked Autonomic Nervous system malfunction,’ the two primary states that prevent the body from working normally to allow healing to occur. This opens the door to nutritional handling at a NEVER before level of healing ability.

“Additionally, due to Nutrition Response Testing’s workable technology, doctors in training are continually improving on the healing processes through nutritional handlings. For example, on a visit by visit basis, one can handle metal detox and chemical detoxification to verify detoxification, not only if it is happening but at what rate and speed, for complete controlled handling with no adverse reaction.”

1998 and Onward: Creating a Healthy Future

A valid and effective system to determine nutritional needs is needed today more than ever. The vast majority of people no longer buy nor eat real foods purchased fresh from Mom and Pop stores, like Bryman’s dad’s Kosher Butcher shop. Back at the start of his career, Bryman remembers, “Folks bought enough to eat for just three days or so, everything fresh. Over the years, food has progressively degraded, to the point where, today, everything you get is packaged, filled with additives and preservatives that actually make you sick.”

There are fewer healthy foods available now. Also, people have been progressively indoctrinated into eating the new fast foods, like McDonald’s, Pizza Hut, etc. Bryman says, “They do not know the difference between foods and products. Sadly enough, people think this food is better, or they don’t even give it a second thought.

“That’s why children today, as a result, are getting weaker and weaker and more susceptible to dis-ease, (a word coined by D. D. Palmer, meaning lack of innate healing ability which manifests as abnormal function). So, a body gets a normal reaction to an abnormal processed product which is dis-ease.”

“It was clear to me, at that time,” Dr. Bryman says, “that there were few, if any, nutritional courses that had components that permitted direct application of a technology which one could use immediately to get results. The answer was Nutrition Response Testing.”

Nutrition Response Testing is taught in an extremely well organized and thorough training program, available in seminars around the country. These programs enable practitioners to immediately apply what they learn in order to restore their patients’ own innate healing ability.

Bryman says “There are training DVD’s and CD’s available that present specific cases that clinicians can study in their own homes and become better and better. After all, it is a Science and an Art; therefore, it must be practiced and studied.

Nutrition Response Testing is clearly at the forefront of today’s chiropractic wellness movement.