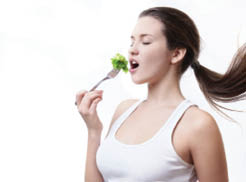 Want to improve athletic performance?  Find your personalized eating plan. Avoid the foods you do not tolerate.

FOOD INTOLERANCE IS A RAPIDLY INCREASING PROBLEM THAT DIFFERS FROM FOOD “ALLERGY” IN THAT SYMPTOMS ARE USUALLY CHRONIC AND DELAYED, PERHAPS BY SEVERAL HOURS OR EVEN DAYS.  HENCE THEY HAVE RECEIVED RELATIVELY LITTLE ATTENTION. NONETHELESS, KNOWING WHAT FOODS YOU DO NOT TOLERATE MAY BE THE MOST POWERFUL TOOL FOR IMPROVING ATHLETIC PERFORMANCE AND WELL BEING.

Ask many of the top professional and amateur athletes what their training secret is and they will respond by saying, “Personalized eating!”

Eating healthful food is one thing, but eating in accordance with your own unique, genetically determined biochemical makeup is quite another thing.  One man’s meat is another man’s poison.  Finding out what foods are right (and which are wrong) for you is the key to health and performance.

Foods that are compatible with your make up will increase your strength and energy.  Consumption of foods or added chemicals that YOUR body perceives as harmful will result in intolerance reactions.  Food intolerance induces the excessive generation of toxic free radicals and inflammatory chemicals. The damage can result in a wide range of health problems.  The following are some of the effects of food intolerance that are of strong interest to athletes:

1. Direct damage to the mitochondria in our cells.  The mitochondria are the sites where energy is produced.  The wrong food activates the immune system and free radicals and attacking molecules produced can cause damage to the DNA, and other structures within the mitochondria, resulting in lower energy production.  This is of special significance to athletes because intense exercise alone will generate damaging free radicals from the normal metabolic process, sped up somewhat by the intensity of the exercise.  Usually, this is not a problem if your anti-oxidant enzymes and nutritional anti-oxidants are sufficient.  Complicate it with food intolerance and the generation of free radicals will overload your systems.

2. Related in some ways to this is that inflammation will also cause a shortening of the ends of the strands of your DNA, called telomeres.  Telomeres are like the plastic pieces at the end of a shoe lace, holding the DNA strands together.  Whenever the cell divides, and immune cells divide frequently, the telomeres are shortened.  When they become too short the cell can no longer reproduce; it becomes old and dies.  This could explain cancer and generalized weakened immunity in old age.  Avoid this by avoiding inflammation.  We can choose what we eat.

3. Auto-immunity can also arise from too much inflammation.  Some immune cells die in the process of trying to neutralize a food.  The DNA from the dead cells release their own genetic material, which, if the amount is too great, may be perceived as “foreign” bodies the immune system must attack.  However, this time you are attacking the blueprint for your own bodily proteins (structures) and auto-immune reacts may occur.  Again, it’s better to avoid this if you can.

4.  Certain immune chemicals with names like Interleukin 6 and tumor necrosis factor alpha will block insulin receptors on your muscle (and brain and liver) cells.  This is a recently discovered finding made by medical scientists that explains why food intolerance makes people fat.  The muscle cells are starved of important energy material which is instead stored as fat in fat cells.

5. Food intolerance can cause inflammation in the gut.  An extreme form is celiac disease.  This reduces the absorption of nutrients that are needed for proper energy production as well as all other biological processes.  It also consumes serotonin in the gut.  Serotonin deficits are related to sugar craving.

8. Chronic inflammation also makes you fatigued.  Ever wonder why you feel so tired when you get the flu?  It’s because the same immune chemicals that are intended to fight viruses cause fatigue, so you are forced to rest when you are sick.  Your body wants you to rest, not exercise, so that your energy can be used to fight the invader.  The immune system that’s inappropriately activated by the wrong food will thus cause you to be chronically fatigued to a lesser or greater extent.  The immune system is now mistaking a food particle for a virus or bacterium.

The biological cause of true allergy has been known since 1967.  An immune system structure called IgE plays a central role.  A small amount of allergen, interacting with IgE, can trigger the release of chemicals that create allergic symptoms.  Many people react to animals, pollens, and, in rare, unfortunate cases, foods.

Food allergy symptoms are quite dramatic, and intentionally so, as this pathway represents our natural defense against large parasites, like helminths.  Unlike other pathogens (i.e. viruses and bacterium) these parasitic worms are significantly larger than the cells that protect against them.  Hence, our immune defense must be very strong, which is why allergies produce such dramatic symptoms.

In contrast, intolerances to foods follow different pathways, and symptoms are dose related, chronic and delayed.  Consequently, most people are unaware of their food intolerances.

:dropcap_open:When chemicals in foods (naturally occurring or otherwise) cannot be adequately detoxified by the liver, the immune system is called to action.:quoteleft_close:

Offending food may be tolerable until such time as a chemical naturally occurring within the food, or that has been added, exceeds a certain threshold.  Many athletes are consuming energy bars that are complex.  The modern diet is, in general, very complex and certainly not what our ancestors had been exposed to for sufficient time for us to adapt.  Hence, even “normal” foods may be simply unfamiliar to us, from a genetic point of view, and aggravate the immune system.

Another consequence of the modern diet is that nutritional cofactors required for hepatic biotransformation are lower in commercially-grown produce.  When chemicals in foods (naturally occurring or otherwise) cannot be adequately detoxified by the liver, the immune system is called to action.

This “total load” is further impacted by the integrity of the gut membrane which, under normal circumstances, forms a natural barrier.  Infection, an imbalance in gut flora, antibiotics, cortisone (exogenous or endogenously produced by excessive stress) and hormones used in birth control, compromises the gut barrier.

Classical, or IgE, allergy to food has been recognized for centuries.  The first recorded anaphylactic reaction to eggs occurred in the sixteenth century (1) and a fish-induced allergy was reported in the seventeenth century.  However, the more recent development of other non-allergic adverse reactions to foods, including food intolerance, only began receiving recognition following the work of Chicago-based allergist Theron Randolf in the 1950s (3).

The link between food intolerance, chemical sensitivity and the dramatic increase in degenerative diseases is clear; coinciding, as they do, with consumption of junk food.  When low quality and non-compatible foods are avoided, inflammation resolves, weight normalizes, and a number of other inflammatory-based health problems subside.

Food intolerances are the most common.  They are most likely caused by the pharmacologic activities of chemicals that naturally occur in the food, or those that are added to the food.

However, some intolerance results from inherited enzyme deficiencies, and thus remain fixed.   Some reactions are exacerbated by poor digestion related to intestinal disorders, or the overwhelming of specific detoxification pathways, that are rate limited (4).  Hence, addressing these underlying issues can result in tolerance of moderate quantities of the food.

Because numerous and varied mechanisms play a role in the pathogenesis of adverse reactions to foods, definitive identification of offending foods relies upon provocation of symptoms following oral challenge under double-blind conditions—not always a convenient option for a training athlete. Various serum tests exist but are of questionable value.  Whereas testing serum levels of allergen-specific IgE is a useful test for classical allergy, it is of limited value for identification of foods and chemicals associated with intolerance that are not IgE mediated.  Rather, a useful test for intolerances would have to measure the direct effect of the food substance on the very immune system cells that are responsible for these intolerances.  It should show a good correlation with clinical symptoms, as confirmed by double-blinded oral challenges.  The only test meeting these criteria is the Alcat test.  The Alcat test was developed by scientists working in the US in the mid ‘80s.  It has since spread throughout the world and is now available in Germany.  It has begun to start a revolutionary breakthrough in sports and general medicine that many have not yet come to terms with.  However, its many benefits are well documented.

Previously, childhood diabetes was exclusively of the Type 1, auto-immune based type.  The consequence: high blood sugar levels and tissue degeneration.  Perhaps this is just the tip of the iceberg.  Now, due to over activation of the innate immune system, due to food intolerance, so called “adult onset” diabetes occurs even in children. Adult onset diabetes is not auto-immune per se, but occurs when insulin receptors on muscle, the liver and the brain lose effectiveness.  Insulin resistance is the hallmark of metabolic syndrome.  Initially, insulin is produced, but it cannot sufficiently facilitate the uptake of glucose because of the insensitivity of the insulin receptors.  The pancreas then produces increasing quantities of insulin but of lower quality. Blood sugar levels increase.

The foremost approach to achieving health, leanness and improved energy and strength should be dietary; emphasizing healthy, natural, nutritious food along with exercise, stress management, intestinal health and adequate nutrition.

Foods that act as triggers require proper identification and avoidance. Testing of white blood cell reactions is the best approach.  It reflects pathological responses to foods that are mediated by immunologic, non-immunologic, pharmacologic as well as toxic pathways.   The Alcat test is a scientifically validated approach that exhibits the highest degree of correlation with blinded challenges and is the most accurate (5). Symptom resolution, normalization of weight and broad clinical correlation affirm this as a most beneficial tool to be added to any health and sports regimen (6).