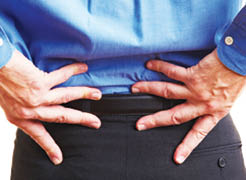 :dropcap_open:S:dropcap_close:ome health problems are purely genetic. Others have nothing to do with genetics but are purely the result of environmental influences, such as diet, infection, or trauma. Then, there are many conditions in which some genetic predisposition interacts with the environment to produce the disease. The classic example is celiac disease, which is tightly linked to genetics but can be controlled by eliminating wheat, rye, and barley products from the diet. Considerable evidence suggests that many of the inflammatory arthritides, including ankylosing spondylitis, could also respond to dietary interventions, including a low-fat, purely plant-based (vegan) diet or sometimes a gluten-free diet.

The hallmark of ankylosing spondylitis is involvement of the sacroiliac joint.2 The earliest symptom is typically tenderness in the sacroiliac joint or pain upon hyperextension of the hip. These symptoms are easily mistaken for evidence of sciatic nerve irritation. As the disease progresses, it may produce flattening of the normal lordosis of the lumbar spine, along with restriction of motion of the lumbar spine. Involvement of the thoracic vertebrae can produce costovertebral joint fusion resulting in restriction of the chest. Accentuation of kyphosis of the dorsal spine can produce a stooped appearance.

The Assessment of SpondyloArthritis international Society (ASAS) (formerly ASsessment in Ankylosing Spondylitis) has published a useful handbook for the assessment of axial spondyloarthritis in general and ankylosing spondylitis in particular.3 The handbook’s stated purpose is to standardize not only patient care but the design of clinical studies. It provides an overview of the classification systems used for inflammatory back pain. The handbook makes it clear that both genetics and the intestinal tract could play an important role in causing inflammatory back pain.

:dropcap_open:Involvement of the thoracic vertebrae can produce costovertebral joint fusion resulting in restriction of the chest.:quoteleft_close:

Ankylosing spondylitis is particularly common in people who carry one or two of the HLA-B*27 subtypes of the HLA-B gene of the major histocompatibility complex. Inflammatory back pain has also been linked to intestinal diseases, including Crohn’s disease. Chiropractors can’t alter their patients’ major histocompatibility complex. That’s the genetic hand of cards that the patient was dealt at conception. However, chiropractors can encourage patients to make the kind of dietary changes that could improve the health of their gastrointestinal tract and consequently the health of their joints.

The major histocompatibility complex (MHC) accounts for nearly half of the predisposition to ankylosing spondylitis, and HLA-B*27 subtypes seem to be the most important genetic influence.4 The MHC is a set of human leukocyte antigens (HLA) that are displayed on the surface of cells and play an important role in the immune system.

The important question for chiropractors to consider is whether the patient has any control over any of the factors that could contribute to spondyloarthropathy. One largely overlooked possibility is that diet could make a difference. After all, intestinal disorders such as colitis and Crohn’s disease are prominent in the diagnostic criteria for spondyloarthropathy,3 and subclinical gut inflammation has also been found in patients with ankylosing spondylitis.5 If the problem starts in the gut, the cause might be something that the patient has been eating. If so, then the patient might be able to alter the course of a potentially disabling and disfiguring disease by making a simple change in diet.

An intriguing case report from Germany suggests that a vegan diet (i.e., a diet that excludes foods of animal origin) holds promise for patients with ankylosing spondylitis.6 The report describes a 33-year-old patient who inherited an HLA-B*27 from both parents and had a 10-year history of ankylosing spondylitis that had responded poorly to conventional medical treatment and physiotherapy. The authors recommended that the patient switch temporarily to a purely vegan diet, avoiding all animal fats and proteins. The patient’s symptoms started to improve within 3 to 4 days after the switch to a vegan diet. After the patient resumed eating meat 6 weeks later, the condition started to worsen again. The patient then resumed the vegan diet. At 3 months’ follow-up, the patient had quit taking tramadol and ibuprofen, had cut his meloxicam dose in half, and was “almost completely free of complaints.”

Normally, the lining of the intestine serves as a barrier that prevents potentially dangerous substances and infective agents from gaining access to the bloodstream. If this barrier is breached, then many harmful substances could enter the bloodstream. This includes not only bacteria and viruses but food proteins that haven’t been completely digested. Proteins from other animals might be particularly hazardous in this regard. They are different enough from human proteins that the human immune system will recognize them as foreign and make antibodies against them. Yet they might still be similar enough to human proteins (a phenomenon called molecular mimicry) that those antibodies will “cross-react” with human proteins and attack the body’s own tissues.7 This cross-reaction helps to explain why eating animal protein seems to predispose people to autoimmune disease.

The anti-inflammatory and disease-modifying drugs used in the management of ankylosing spondylitis are outside the scope of chiropractic practice. Nevertheless, chiropractors may be involved in helping ankylosing spondylitis patients with exercise and physiotherapy. Given the lack of data on dietary interventions for spondyloarthropathy, what is a chiropractor to do? The first thing is simply to alert patients to the fact that inflammatory back pain has been linked to intestinal problems that could respond to a change in diet. The second thing would be to develop some simple guidelines that could help patients eliminate the foods that are likely to contribute to gut problems and inflammatory arthritis.  A switch from the standard American diet to a low-fat vegan diet is beneficial to a patient’s overall health and might be sufficient to arrest the inflammatory disease. Some other patients may also have to eliminate other troublesome foods. For example, people with gluten intolerance would have to eliminate wheat, rye, and barley. A registered dietitian, or qualified nutritionist can help patients identify and eliminate the foods that are contributing to their back problems.

Laurie Endicott Thomas has worked as a medical editor and writer for more than 20 years. She is the author of the upcoming book Where Do Gorillas Get Their Protein? Her Web site is www.gorillaprotein.com and she blogs at www.wheredogorillasgettheirprotein.blogspot.com.