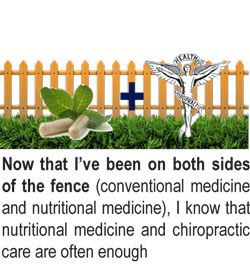 I graduated from Life College in 1990 and, within a couple of years, had built a large “straight” practice—adjusting seventy to eighty patients a day. While I was able to help most of my patients, some still suffered from illnesses that didn’t always respond to chiropractic care alone. “Why?” I asked. I started asking my patients about their diets and lifestyles. I found that most of my patients had such unhealthy lifestyles and were so uninformed about their bodies that they were doomed to a life of poor health and misery.

I began to slowly add diet and nutritional advice into my practice. I found that patients who took a good multivitamin/mineral supplement started having less pain, more energy, and felt better overall. I read dozens of medical and nutritional books and traveled around the country training with some of the masters of nutritional and integrative medicine. I took all the post-graduate classes I could on nutrition and biochemistry. Slowly, I saw my practice change from seeing seventy to eighty patients a day, to seeing fifteen to twenty-five “medical misfit” patients a day. These “medical misfits” had either fallen through the conventional medical cracks (didn’t respond) or were seeking a more natural way to restore their health.

My practice continued to grow to accommodate the ever-increasing misfits, especially those with fibromyalgia and Chronic Fatigue Syndrome (CFS). And I was able to help many of them. But I began to feel that my practice was inferior to conventional medical practices. Surely, if my patients could get prescription drugs along with nutritional therapy, they’d do even better.

To counter my insecurity, I decided I would open my own medical practice. Advanced Family Medicine was based on integrating prescription and natural therapies (integrative medicine) for the prevention and treatment of disease. As the clinical director, I either wrote or oversaw all of the nutritional and medical therapies used in our practice, including chelation therapy, oxygen therapy (H202 IV’s), vitamin/mineral IV’s, human growth hormone (HGH) injections, nutritional protocols and, of course, prescription drug therapies. I learned a great deal about integrating traditional and alternative methods. I saw how prescription medications could provide quick relief for many of the common illnesses. Some prescription medications were tremendously helpful, including natural bio-identical hormones (tri-estrogen and progesterone cream), Armour thyroid, T3 Therapy, low dose Cortef, proper sleep medications (only after 5-HTP [5-Hydroxytryptophan], melatonin or other naturals didn’t work), antibiotics for acute bacterial infections, and cortisone for acute back pain and respiratory infections.

But, I also (re-) learned, from first hand experience, that prescription drugs often lead to more health problems.

The medical practice continued to grow and we moved onto the campus of a large hospital in Birmingham, Alabama. Eventually, we became so overwhelmed with patients that we fell back into the conventional medical paradigm of ten to fifteen minute office visits ending with more prescriptions (either nutritional or medical). We had lost some of the original ideas that prompted me to start the medical practice. And between managing six doctors, a staff of fifteen, and never ending day-to-day stress, I lost my joy of practicing. It was time for a change.

In 2003, my first book, Treating and Beating Fibromyalgia and Chronic Fatigue Syndrome, was released to bookstores.

That same year I sold my integrative medical practice and, with some trepidation, opened my own one-man practice again. I found, through trial and error, that the less I referred to my old medical clinic, the better my fibromyalgia patients did. The reasons were many but, mainly, the less medication the patient was on, the easier it was to restore their own self-healing mechanisms.

This doesn’t mean I don’t refer to medical doctors; as needed, I do. But, now that I’ve been on both sides of the fence (conventional medicine and nutritional medicine), I know that nutritional medicine and chiropractic care are often enough. I had come full circle. I knew that the best way for my patients to feel better, and get well, was to get them healthy from the inside out. Funny, since this is exactly what D. D. and B. J. Palmer, the founding fathers of chiropractic, said years ago.

Patients now call or travel from all over the country to consult with me. Why? Because chiropractic and nutritional therapy work, even if traditional medicine says it doesn’t. Conventional medicine continues to promote more and more drugs while ignoring and even attacking the merits of scientific, research based, nutritional medicine.

There is no doubt that conventional medicine saves thousands of lives each year. Conventional medicine excels at life saving treatments. It’s often effective in alleviating many of the symptoms associated with certain illnesses. However, no one is born with or develops a drug deficiency.

Treating symptoms doesn’t translate to having better health. Conventional medicine therapies often attempt to mop the wet kitchen floor (symptom) while ignoring the leaky roof (cause). Even those within the medical profession are acknowledging that the use of drugs to pacify every symptom is only a temporary band-aid, at best, and, at worst, causes many of the symptoms seen in doctor’s offices each day.

Author John R. Lee, MD, author of What Your Doctor May Not Tell You about Menopause, has this to say on the subject: “Most over-the-counter, and almost all prescribed, drug treatments merely mask symptoms…. Drugs almost never deal with the reasons why these problems exist, while they frequently create new health problems as side-effects of their activities.”

Chiropractors often refer to a saying by Thomas Edison: “The doctor of the future will give no medicine, but will interest his patients in the care of the human frame, in diet, and in the cause and prevention of disease.”

The greener grass isn’t always as satisfying as we imagine. Giving up my medical practice and practicing solo again has helped me appreciate just how rewarding it is to be one of the thousands of chiropractors who are the doctors of the future of which Edison spoke.