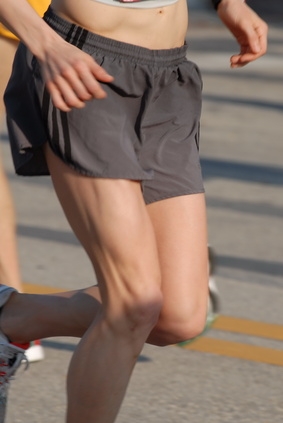 :dropcap_open:T:dropcap_close:his article is the conclusion of a series on the short leg syndrome. Previously, I have discussed the importance of proper alignment of the hip, knee, and ankle joints to each other.  This month, we move into the pelvis and summarize the role of proper lower extremity mechanics on walking and maintaining proper spinal alignment.

Ask the patient,while lying prone,  to bend one knee to 90 degrees and raise that leg off the table as far as possible.  Check the height.  Return the leg to the table and straighten the knee. Now, have the patient similarly raise the opposite leg, and determine the side of RESTRICTED hip extension. The following muscles are involved with extending the hip with the knee flexed:

There is an interesting relationship involving the quadriceps and the hamstring muscles. Despite being antagonists to each other, both the hamstrings and quadriceps contract when one is rising to stand from a sitting or squatting position. Their combined effort allows for efficient walking.

• The rectus femoris (L2 to L4) pulls greater on the knee than the hamstrings, resulting in knee extension.

This is a useful clinical sign for determining acute problems in the lumbar spine that also involve the quadriceps muscle, which is innervated by the femoral nerve (L2 to L4). Patients with low back pain will rise from a seated position by using their hands to “walk up” their thighs.

I have been describing the importance of finding the exact cause of the short leg, so that continual stress can be removed and your corrections can have lasting benefit. Now, it is time to put it all together and describe exactly why we, as chiropractors, can become known as healers who truly restore normalcy and function and maintain health.

During normal walking, where opposite arm and leg movements occur simultaneously, tradition holds that the legs propel the body, and the trunk is carried along as a passive passenger. However, modern studies show that there is a rotational component that is essential for optimal movement and to maintain the upright posture against gravity. Loss of coordinated motion between the pelvis and the lumbar during gait is clearly involved in any low back or hip pain condition.

It may be convenient to think of this as an “anti-gravity spiral spring mechanism.” The mechanism involves the lateral side-bending of the lumbar spine causing or driving an axial torque in the pelvis. This torqueing occurs when the legs move, but the motion is actually driven by the interaction of the global muscles involved in movement.  This movement is best observed and described as follows:

• The left heel strike produces a downward motion of the trunk and spinal rotation with convexity of the curve to the left. At the same time, the sacrum side bends to the right.

• The erector spinae muscles are partly responsible for this side bending. But the kinetic energy chain begins in the tibialis anterior and Peroneus L & B muscles. We examined these muscles when we tested ankle plantar flexion and dorsiflexion. Think of these muscles as the foot’s stirrup muscles. Keep in mind that stress points located within these muscles are often implicated in disruption of cranial-sacral respiration and coccygeal fixations.

• The sacrotuberous (great or posterior sacrosciatic) ligament then runs upward from the tuberosity of the ischium to the sacrum and coccyx—specifically, to the inferior margins of the sacrum and the upper coccyx and to the lower transverse sacral tubercles. It is flat, and triangular in form; narrower in the middle than at the ends.

I would like to close this account of the short leg syndrome by pointing out that the dura mater and the sympathetic chain also originate from the sacro-coccygeal articulation. The implications are profound and easily account for the success of our profession in the past. I believe an appreciation for the material presented in these articles will take you a long way toward professional success in the 21st century.