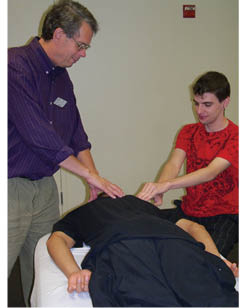 :dropcap_open:D:dropcap_close:r. Jeff Rockwell, DC is a chiropractor, bodyworker and somatic educator, with a passionate interest in the neuroscience of manual therapy.  A pioneer in the use of instrumentation in neuromuscular therapy, Rockwell has been a popular teacher on the seminar circuit for the past twenty years. Professor of Clinical Sciences at Parker University for many years, he is the author and producer of numerous manuals, books, and DVDs on neuromuscular therapy and somatic education, and he is a member of the Continuing Education faculty for Parker University. Dr. Rockwell can be reached at www.manualneuroscience.com, touchinghealth[at]aol.com or 831-713-8885.