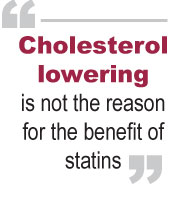 In the 1992 presidential campaign, Bill Clinton was a heavy underdog to popular incumbent George H. W. Bush. Bush was considered unbeatable due to foreign policy successes including the end of the Cold War and routing Saddam Hussein in the first Gulf War. But Bush’s approval ratings, which had been in the 90 percent range, began to dip as his campaign ignored the economic recession. Clinton’s campaign manager James Carville’s now famous campaign slogan, “It’s the economy stupid,” helped turn the tide and Bill Clinton became the forty-second American president.

Conventional opinion and current medical dogma holds that low cholesterol, especially low LDL cholesterol, reduces the risk and incidence of heart disease and stroke. This belief is so entrenched in the medical community that the FDA now approves drugs to prevent heart disease, as it did with Zetia and Vytorin, solely on the evidence that they lower LDL cholesterol levels. Zetia has never been proven to reduce heart attacks, strokes or death. Statin drugs help reduce the risk of heart attack and stroke for those who’ve already had a cardiac event (one percent over placebo) but fail to reduce death in women, the elderly, men over the age of 47, and in men without cardiovascular risk factors.

A 2006 study in The Archives of Internal Medicine looked at seven trials of statin use in nearly 43,000 patients, mostly middle-aged men without heart disease. In that review, statins didn’t lower mortality.

Nor did they in a study known as Prosper, published in The Lancet in 2002, which studied statin use in people seventy and older. Nor did they in a 2004 review in The Journal of the American Medical Association, which looked at thirteen studies of nearly 20,000 women, both healthy and with established heart disease.

Despite a growing voice of reason, which became even louder after the recently released Enhance study, the cholesterol zealots continue to view cardiovascular disease with tunnel vision. This myopic vision fuels the cholesterol drug war which rages on as each pharmaceutical company seeks to gain economic gain in the 40 billion dollar a year lipid lowering drug market.

In an attempt to take on the cholesterol Goliath, Pfizer’s Lipitor (10 billion dollars in sales annually), Merck and Schering-Plough combined their cholesterol lowering drugs, Zocor and Zetia, to form the “super drug” known as Vytorin. Vytorin’s goal was to lower LDL cholesterol more than either drug could alone. Zetia lowers blood cholesterol by blocking the absorption of dietary cholesterol from the intestines. Zetia used alone is modestly effective in lowering LDL cholesterol by approximately 17 percent. Zocor alone lowers LDL levels by 36 percent—similar to Lipitor.

The hope was that by lowering LDL to dramatically low levels, Vytorin would do a better job of slowing the accumulation of fatty plaques in the arteries. Vytorin did, in fact, reduce LDL—by a whopping 51 percent (similar to AstraZeneca’s Crestor).

However, the two-year “Enhance” trial failed to prove that Vytorin is better than Zocor alone for slowing plaque accumulation; instead atherosclerosis worsened in those taking Vytorin.

Merck and Schering-Plough suppressed this finding for twenty months.

The study results were not revealed until the two drug companies were pressured into doing so by an article in The New York Times and a Congressional inquiry. The marketers of Vytorin said they had nothing to hide. It’s hard to believe they weren’t just a little reluctant to publish their highly anticipated study. The news that Vytorin, which retails for $100 a month and did $2 billion in sales in 2007, was clinically inferior (perhaps even dangerous) to generic simvastatin (statin), costing less than $20 a month, obviously wasn’t what stockholders wanted to hear.

Merck and Schering-Plough are running full-page ads daily in the Times and Wall Street Journal, warning people not to be confused by a single study and to continue taking Vytorin. The advice was backed by the American Heart Association, which the Times reported receives nearly $2 million a year from Merck/Schering-Plough Pharmaceuticals.

Other LDL lowering drugs have bitten the dust in the last coupe of years as well.

Pfizer’s trial of its much-anticipated drug torcetrapib, which raised HDL, the good cholesterol, and lowered LDL, had to be stopped in 2006 because the drug caused heart attacks and strokes.

Estrogen replacement therapy, which is known to lower LDL cholesterol levels, failed to reduce the incidence of heart attack and stroke in clinical studies.

Ok, if cholesterol lowering isn’t the answer for everyone, why do statins help people with existing heart disease? Dr. James K. Liao of Brigham & Women’s Hospital in Cambridge, Massachusetts, has been investigating this question for over a decade. He suspects that statins have other biological effects. His research shows that statin drugs not only block cholesterol, but also an inflammation-generating enzyme known as rho-kinase.

When Liao reduced the rho-kinase levels in rats, they didn’t get heart disease. “Cholesterol lowering is not the reason for the benefit of statins,” he concludes. Of course, there are dozens of inflammatory chemicals that play a role in triggering cardiovascular disease. Diet, health habits, our environment, even our personality may initiate inflammatory chemicals that perpetuate cardiovascular disease events.

Rodger Murphree, D.C., has been in private practice since 1990. He is the founder of, and past clinic director for a large integrated medical practice, which was located on the campus of Brookwood Hospital in Birmingham, Alabama. He is the author of Treating and Beating Fibromyalgia and Chronic Fatigue Syndrome, Heart Disease What Your Doctor Won’t Tell You, and Treating and Beating Anxiety and Depression with Orthomolecular Medicine. He can be reached at www.treatingandbeating.com, by email at [email protected] or 1-205-879-2383.