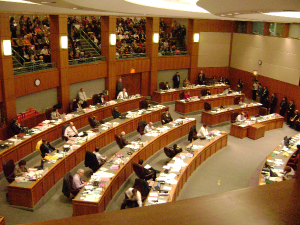 :dropcap_open:A:dropcap_close: law which was claimed to have been designed to allow chiropractors the ability to fill the void of Primary Care Physicians in the state of NewMexico failed in the New Mexico Senate by several votes, after having passed the state house.  The passion that many D.C.’s demonstrated in a debate that has been just under the surface within various chiropractic circles for decades seems to have come to a head.  The “limited formulary” which chiropractors were seeking the right to be able to prescribe, after having passed examinations as well as further training, included such things as muscle relaxers, anti-inflammatories, and other internal and topical substances.  Opponents of the bill, many of which originated from within the chiropractic profession, claim that chiropractors have no business prescribing medications, as chiropractic, from its inception, has differentiated itself by being a drugless profession.  Supporters of the bill point out that even those that prescribe things such as vitamins, fatty acids, or herbs, may one day fall under the regulatory authority as prescription medications, and that the purpose of the bill is to help with the current shortage of Primary Care Physicians.  Additionally, supporters claim that the measure would reduce the use of prscription medication overall.