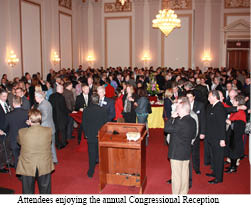 Educational Symposium offers more than 40 hours of Educational Programing during NCLC
:dropcap_open:I:dropcap_close:n March, after new and returning members of the 113th Congress settle into their offices on Capitol Hill, chiropractic physicians and students from around the country will come to Washington, D.C. to provide the profession’s perspective on the important health care issues facing our nation.

This face time with legislators will take place March 6-10 as part of the 2013 National Chiropractic Legislative Conference (NCLC) and Education Symposium, hosted by the American Chiropractic Association (ACA), with the Chiropractic Summit serving as a partnering organization for the event.
The theme of this year’s conference, “Framing the Future of Chiropractic,” will focus on a big picture view of the future for the chiropractic profession, and on setting the stage for its advancement during this pivotal time for health care in the United States.
NCLC is the profession’s chance to weigh in on, among other issues, the ongoing implementation of the Patient Protection and Affordable Care Act (PPACA), further expansion of chiropractic services in the Department of Defense (DoD) and Department of Veterans Affairs (VA), federal student loan relief for chiropractic students and getting doctors of chiropractic (DCs) commissioned in the U.S. Public Health Service (USPHS) Commissioned Corps.
“The month of March after an election year is the perfect time for this kind of advocacy work with legislators,” said ACA President Keith Overland, DC. “The Congressional season is young, and the newly elected lawmakers will be excited about their new jobs. We need to strike while the iron is hot, so I urge every chiropractic ally that can to come to NCLC on behalf of the profession and our patients.”
NCLC is the chiropractic profession’s most important public policy and educational event. For more than 30 years, chiropractic physicians and chiropractic students from across the country have gathered in Washington, D.C. annually to meet with members of Congress and discuss the issues that matter most to DCs and their patients. In addition to the advocacy on Capitol Hill, NCLC offers education opportunities and information about important federal initiatives.
Over the years, a list of political dignitaries and pundits have appeared at NCLC, including political strategist and CNN contributor Paul Begala; political pundit and Daily Caller owner Tucker Carlson; political strategist and media personality James Carville; Ret. Brig. Gen. Becky Halstead, spokesperson for the Foundation for Chiropractic Progress; Howard Wasdin, DC, author of Seal Team Six: Memoirs of an Elite Navy Seal Sniper; and perennial chiropractic supporters such as Sens. Tom Harkin (D-Iowa), Orrin Hatch (R-Utah) and Charles Grassley (R-Iowa); and Reps. Mike Rogers (R-Alaska) and James Clyburn (D-South Carolina).
Key Issues for Chiropractic on the Hill

Following a much-anticipated U.S. Supreme Court ruling that found the health care reform law to be constitutional, full implementation of PPACA is underway. NCLC attendees will be talking with legislators about how the services provided by doctors of chiropractic are cost effective and about how DCs can help fill the primary care workforce gap. Many lawmakers are still unaware that the chiropractic health care model has always been heavily focused on providing essential services and promoting healthy lifestyles for the prevention of disease and injury.
Aside from health care reform, at NCLC doctors and lawmakers will talk about other pressing legislative issues, such as:
“Introducing pro-chiropractic legislation is only a part of the battle,” said John Falardeau, ACA’s senior vice president of government relations. “The next step in getting these bills passed is to generate support for the legislation among members of Congress; and the best way to do that is to come to Washington for NCLC and tell your lawmakers in person why these issues matter to you and your patients.”
Chiropractic Summit and ABCA to Meet

The Chiropractic Summit—an initiative to unite the profession that includes 41 organizations, including ACA, the Association of Chiropractic Colleges, the Congress of Chiropractic State Associations and the International Chiropractors Association—will meet during the first day of NCLC-related activity, on Wednesday, March 6. Additionally, for the first time, the American Black Chiropractic Association (ABCA) will host a meeting in conjunction with the event.
Network with Colleagues, Lawmakers and Attend Hours of Educational Programming
As always, opportunities to network with colleagues—and elected officials—will be abundant during NCLC. The annual congressional reception (an attendee favorite) will be held again this year. Previous congressional representatives in attendance include: Rep. Howard Coble (R-North Carolina), Sen. Richard Blumenthal (D-Connecticut), Rep. Walter Jones (R-North Carolina) and Former House Speaker Rep. Nancy Pelosi (D-California).
Finally, ACA’s Second Annual Educational Symposium will take place March 8-10. Participants can attend more than 40 hours of educational programming. Featured topics include:
It can’t be stated often or strongly enough. This is a pivotal time for chiropractic physicians and health care in general in this country. So now, more than ever, Congress needs to hear the message from DCs in their districts and states. The chiropractic profession has been on the path of prevention and wellness for more than a century, and it’s time for the rest of the country to follow suit. NCLC is the chiropractic profession’s opportunity to tell its story to elected officials and to make them aware of just how much it has to offer.
For more information on NCLC, including how to register, visit www.acatoday.org/NCLC.
Melissa Lee is the American Chiropractic Association’s public and media relations manager. She has spent her entire career working with media on behalf of professional associations. Melissa promotes chiropractic services to patients in need by coordinating media interviews with chiropractic spokespeople—providing a voice for the profession in consumer media.