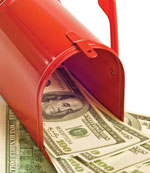 Recently, Iowa Senator Grass ley started looking into Medicare’s acknowledgment that the amount of money overpaid to Durable Medical Equipment (DME) providers, due to fraud and abuse, has increased by 44% in the past few years. You may ask, what does this have to do with chiropractic and my practice? The answer is, “A lot!” With the Federal Government feeling the pressure of reduced income and increased expenditures, they are looking at any and all ways to reduce spending, especially for things that shouldn’t have been paid for in the first place.

Even though the cost of drugs far outweighs the amount of money spent on DME, it is the percentage of overpayments, due to fraud and abuse that makes this issue a political football. In chiropractic, we have been saddled with the same issues as DME ever since the 2005 office of the inspector general review of chiropractic. Because of the percentage of claims that should have been denied (67% according to the OIG report), payment for chiropractic care has become a political football that has nothing to do with patient care. To make things worse, within the next year Medicare will have launched recovery audit contractors across the country to review and try to recover part of the $10,000,000,000 overpaid within the Medicare System every year. But, what causes an audit? There are many things that cause an insurance carrier to decide to pick a specific provider of alignment. In the past, the most common causes of an audit were related to billing and coding procedures that took place within the office. But, because of increased scrutiny from the Federal government, there are many new reasons why a provider would be chosen to be audited. Those reasons can range from not charging for services provided, to paying for referrals. So, why does the government care if you give free X-Rays and examinations to Medicare beneficiaries? The answer is simple. The Office of the Inspector General released a special advisory bulletin in August of 2002, titled Offering gifts andother inducements to beneficiaries. The bulletin states: Offering valuable gifts to beneficiaries to influence their choice of a Medicare or Medicaid provider raises quality and cost concerns.Providers may have an economic incentive to offset the additional costs attributable to the giveaway by providing unnecessary services or by substituting cheaper or lower quality services. The use of giveaways to attract business also favors large providers with greater financial resources for such activities, disadvantaging smaller providers and businesses. But, what is considered a valuable gift? The bulletin states: The OIG has interpreted the prohibition to permit Medicare or Medicaid providers to offer beneficiaries inexpensive gifts (other than cash or cash equivalents) or services without violating the statute. For enforcement purposes, inexpensive gifts or ervices are those that have a retail value of no more than $10 individually, and no more than $50 in the aggregate annually per patient. Violating these rules can create harsh penalties for the practice. The bulletin states: A person who offers or transfers to a Medicare or Medicaid beneficiary any remuneration that the person knows or should know is likely to influence the beneficiary’s selection

of a particular provider, practitioner, or supplier of Medicare or Medicaid payable items or services may be liable for civil money penalties (CMP’s) of up to $10,000 for each wrongful act. There are two simple steps that a practice can take to avoid giving an auditor additional ammunition to use against the practice:

Dr. John Davila is a 1994 graduate of Palmer College of Chiropractic in Davenport, IA, and practiced in the Myrtle Beach, SC, area for 13 years. Since 2000, he has been consulting with insurance companies and doctors in private practice in the areas of coding and documentation. In 2001, he re-wrote the Medicare LCD coverage policy for Palmetto GBA (SC Medicare). His company, Compliant Services & Solutions, Inc., helps doctors of chiropractic to ethically maximize their practices, while avoiding audits and repayments to insurance carriers. You can reach Dr. Davila, toll free, at 1-877-322-6203 or by email at [email protected] or on the web at