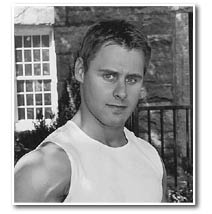 :dropcap_open:D:dropcap_close:r. Corey Mote started off in high school training for sports such as football and track with weight training.  By his eleventh grade year, he decided to compete in powerlifting competitions. Within one year of powerlifting, he won the National title for his weight division as a teenager.  After the Powerlifting Nationals, he decided to go into Olympic-style weightlifting, an entirely different type of lifting and training.  He ended up doing rather well with this sport as well, placing 2nd in the Georgia Games with pre-Olympian competitors. After a couple years of Olympic-style weightlifting, he decided to go into bodybuilding. His first show was in 1999 at the Association of American Universities Mr. Teenage America in Cleveland, Ohio, where he ended up placing 3rd in the competition. He then went on to compete and win the Nationals Bodybuilding Championship’s National Physique Committee Teenage Georgia the following year. After that, he competed and won several other shows before he decided to put a hold on competitions—although staying in shape for future contests—for a few years, so he could focus on school and other priorities.  He started back competing in September 2010, and, this time, it was in another country altogether.  He competed in the Musclemania Britain in St. Albans, a city just outside of London.  He ended up winning both for his weight class and the Overall, earning the status as a Professional natural bodybuilder. From that point on, his sights were set on making an impact at the pro level in the sport. He immediately began training for the Musclemania Universe that was to be held in Miami in June 2011. Here he would make his pro debut, and he wanted it to be special. It was. He ended up placing 3rd in the Pro Heavyweight division, shocking a lot of people, including himself.

TAC: How did you first get involved in chiropractic?

MOTE: I was first exposed to chiropractic in my second year of college, upon having a sacroiliac sprain that I could not shake alone. I saw a chiropractor for it, and he corrected it within two to three visits. I then realized I needed to make use of chiropractic more often with all the training I was undertaking. I decided to do just that, and it elevated  my performance in the gym to new heights. From that point on, I knew becoming a chiropractor was in my future.

:dropcap_open:I first came to a chiropractor to relieve pain, but the doctor I went to explained to me the importance of using chiropractic for optimal physical function and thankfully, I listened.:quoteleft_close:

TAC: So is that what led you to seek out chiropractic as a consequence of pain, or more to enhance function?

MOTE: I first came to a chiropractor to relieve pain, but the doctor I went to explained to me the importance of using chiropractic for optimal physical function and, thankfully, I listened. I do not think I would have been nearly as successful with bodybuilding had  I not used chiropractic care.

TAC: Have you been doing Bodybuilding your entire life?

MOTE: To an extent, yes. I began exercising at the age of four, by doing push-ups, sit-ups, sprinting, 1-mile run. I owe it to my mother and father for that, as they taught me the importance of being healthy, active, and fit at a very young age. As far as bodybuilding as a sport, well I’ve been specifically training for that since I was a teenager, right after graduation from high school.

TAC: What was it that led you to choose Life University for your studies?

MOTE: I chose Life University when I found out that Dr. Guy Reikman was hired on as the new president. I read so many good things about him and the philosophy he holds so dear, and I wanted to be a part of Life University at that point, as I saw that they were looking to do great things for the chiropractic profession.

TAC: So you’re 30, is that old or young for a bodybuilder? Can you tell us why that is?

MOTE: 30 is actually a great age to begin one’s professional natural bodybuilding career at. As a bodybuilder who trains intensely, he/ she develops more muscular density with age. More definition in the musculature is present, and this is very important in competitions.

TAC: Do you currently maintain an active practice? If yes, what kinds of patients are treated, and treatments used?

MOTE: I currently own and run Performance Chiropractic and Rehabilitation in Clarkesville, Georgia. I graduated from Life University in September 2008, and began my practice in March 2009. I see mostly personal injury and sports injury patients. Along with manual spinal manipulation, I use various modalities, such as E-stim, ultrasound, traction, flexion distraction, and therapeutic exercises in my practice.

TAC: How much time does that leave you to train every day?

MOTE: I only need 90 minutes a day, five days a week to train.  Many people believe that a top-level bodybuilder must stay in the gym four hours a day, every day, to attain such a level. This is certainly not true. Proper diet and rest are equally as important as training. Training more than what I currently do would be over-training, which is something that should be avoided if trying to build muscle mass without overuse injuries.

TAC: Who is your greatest bodybuilding mentor?

MOTE: I would have to say my greatest bodybuilding mentor is Lee Apperson, an IFBB pro bodybuilder that I had the honor to train with in the summer of 2003 in Daytona Beach, Florida. His formula for winning is very similar to mine, in that his main advantage on stage is his definition, proportion, and symmetry – not size.

TAC: And your greatest chiropractic mentor?

MOTE: My greatest chiropractic mentor is Dr. Richard Rosenkoetter of Chiropractic and Sports Injury of Atlanta. I interned with Dr. Rosenkoetter for nine months before setting up my own practice an hour north of Atlanta, basically running my practice as similar to the way he runs his as I can. He is a phenomenal chiropractic physician, and it was truly an honor to intern under him.

:quoteright_open:It would soon become America’s (and the world’s) most popular natural bodybuilding competition.:quoteright_close:

TAC: What is it that you find unique about Musclemania, as a venue for body building?

Musclemania began in 1991 as bodybuilding’s first and only tour of world class level staged competitions. Early on, Musclemania took a bold and challenging step forward by declaring that this exciting event would become a natural event. It would soon become America’s (and the world’s) most popular natural bodybuilding competition.

TAC: What is the last book that you read?

MOTE: The last book I read was The Secret. I have probably read it ten times now. I truly believe what the book teaches—that we attract what we dwell on. If one has a positive outlook on things, he or she attracts more positive things into his or her life. The same goes for negative thinking. A pessimist has a difficult time ever achieving his or her goals in life, basically because he or she is consistently viewing things in life as undesirable or unfavorable.