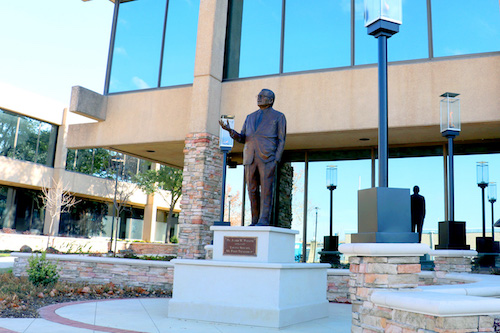 In remembrance of its founder, the late Dr. Jim Parker, Parker University is proud to recognize and celebrate his 100th birthday on September 12. Because of Dr. Parker’s commitment to success and his willingness to make a difference in others’ lives through chiropractic, Parker University is what it is today – the fourth-fastest growing college in Texas, with more than 1,800 students and 34 academic programs.

While a student at Palmer College of Chiropractic in Davenport, Iowa, Dr. Parker established two chiropractic clinics in Illinois. He moved to Fort Worth in 1947 and opened 18 clinics in Texas, including cities like Fort Worth, Houston, Beaumont, Baytown, and Austin.

From 1963 to 1970, Dr. Parker traveled the world conducting his seminars. Throughout his prestigious career, Dr. Parker taught more than 500,000 Doctors of Chiropractic globally.

In 1978, Dr. Parker led a march in Washington, D.C., to petition the Department of Health, Education, and Welfare to grant the same rights and privileges to Doctors of Chiropractic as it did to medical doctors. He also played a vital role in convincing Louisiana legislators to license chiropractors.

In September 1982, Dr. Parker opened Parker College of Chiropractic in Irving. The college began as an extension of his Parker Seminars program, and he served as president of the college until 1996.

For five decades, Dr. Parker’s passion was dedicated to chiropractic, up to his passing in 1997. Even today, Parker University’s philosophy of service to others is rooted in the principles and beliefs Dr. Parker felt so strongly about establishing.

Parker University President Dr. Bill Morgan says, “Parker University owes the legacy of James W. Parker our deepest gratitude. His vision, energy, and unstoppable drive created a university worthy to bear his name. We, at Parker, strive to honor his memory through excellence, loving service, and dedication to the healing arts.”

It is an honor to celebrate the remarkable life and impressive career of Dr. Parker. The chiropractic industry is what it is today because of his commitment to serving others and his putting innovative chiropractic care above all else. Happy birthday, Dr. Parker!