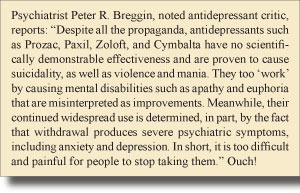 Americans now spend more money on antidepressants than the Gross National Product of two-thirds of the world’s countries. Yet studies consistently show that, in up to 70 percent of the time, these drugs are no better than sugar pills.

In their search for the Holy Grail of happiness, patients with mood disorders often try one antidepressant after another. Unfortunately, each new drug eventually loses its punch and the patient is left feeling hopeless once again.

But what if the patient isn’t suffering from a Prozac deficiency but a vitamin B6 insufficiency?

The brain chemicals or neurotransmitters depend on adequate amounts of B vitamins, especially, B1, B2, B3, B12, and folic acid to join with the amino acids tryptophan, glutamine, and phenylalanine, to make serotonin, GABA, dopamine, and norepinephrine.

Folic acid is needed to make catecholamines, dopamine, norepinephrine, and epinephrine. Low levels of folic acid have been linked to depression and bipolar disorder in a number of studies. Insufficient folic acid is one of the most common nutritional deficiencies, and one-third of depressed adults are low in this vitamin.

A sore, red tongue may indicate a folic acid deficiency. Folic acid needs vitamins B12, B3, and C to be converted into its active form.

Several studies have demonstrated the effectiveness of folic acid in reversing depression. One of these studies evaluated the use of folic acid in a group of patients suffering from depression or schizophrenia. Results showed that 92 percent of the folic acid group made a full recovery, compared with only 70 percent of the control group who took the standard prescription-drug therapy. Those who received the folic acid spent only twenty-three days in the hospital, while those on prescription-therapy alone averaged thirty-three hospital days.

A study showed that women who received folic acid plus Prozac had a greater reduction in depression symptoms than women who took Prozac alone.

Pyroluria and Vitamin B6

Pyroluria is a blood disorder. When the body produces hemoglobin, a constituent of red blood cells, there is a byproduct called kryptopyrroles. Normally harmless, in this group of people, the kryptopyrroles multiply too rapidly and block receptor sites for B6 (pyrodoxine) and zinc, leading to a serious deficiency of these two nutrients. Among other things, B6 and zinc directly help maintain a healthy emotional state. It’s widespread, and estimates as high as 20 percent of all mood-disorder patients and 40 percent of people with schizophrenia have pyroluria. It seems to affect women more than men. The symptoms of excess urinary kryptopyrrole first manifest themselves as behavioral abnormalities. Although children tend to be more easily diagnosed than adults, the symptoms are consistent: poor tolerance of physical and emotional stress, mood swings, depression, sensitivity to light, noise, and other tactile sensitivities. Later symptoms can range from severe depression to chronic schizophrenia.

Pyroluria was identified and promoted more than forty years ago by psychiatrist Abram Hoffer. Dr. Hoffer is one of the founding fathers of Orthomolecular Medicine. Orthomolecular medicine describes the practice of preventing and treating disease by providing the body with optimal amounts of substances which are natural to the body.

Individuals who suffer from pyroluria may have some of these characteristics: fair-skin, sunburn easily, don’t dream at night, history of cluster headaches, premenstrual syndrome (PMS), anemia, cold hands or feet, tingling sensations in the hands or feet, motion sickness, poor immune function, white spots on the fingernails, stretch marks on the skin, sensitivity to sunlight, and an aversion to protein-rich foods. All of these characteristics suggest a vitamin B6 or zinc deficiency.

Vitamin B6 is found in such products as brewer’s yeast, sunflower seeds, soybeans, walnuts, lentils, lima beans, hazelnuts, brown rice, avocados, and many other common foods.

Those who suspect they have pyroluria should be taking 100 mg of a special form of vitamin B6 known as pyridoxal-5-phosphate (P5P), along with 100mg of zinc and a good optimal daily-allowance multivitamin mineral formula.

Individuals under chronic stress—alcoholics, women who are pregnant, lactating, or taking oral contraceptives—are all prone to developing a B6 deficiency.

So, is it a Prozac deficiency or a B vitamin insufficiency? You won’t know unless you check.

Want to reduce this risk of mood disorders in your patients? Make sure all your patients are taking a good optimal daily allowance multivitamin.