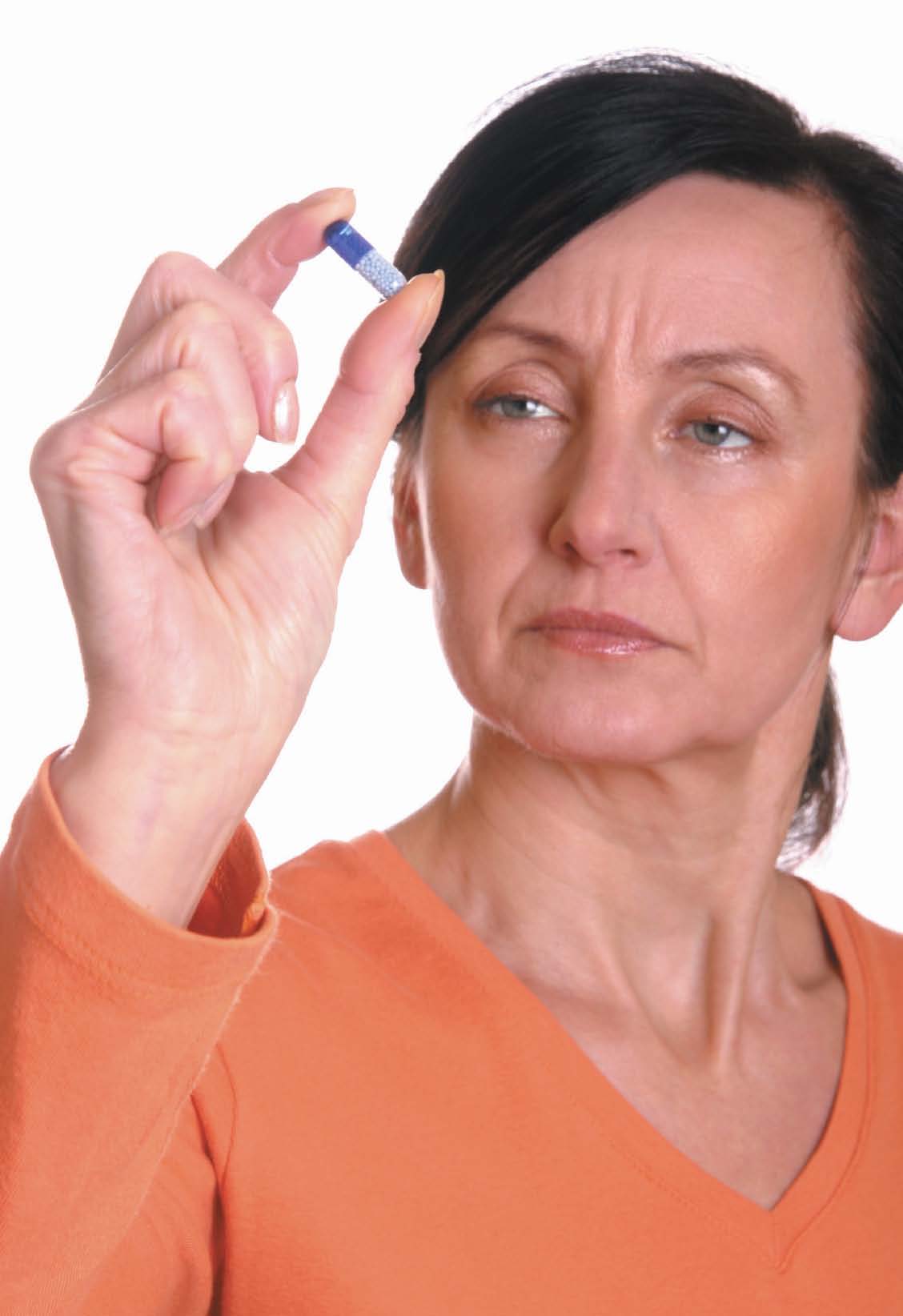 Despite making up only fourteen percent of the u.s. population, those sixty-five and over consume more than one-third of all prescription drugs. Senior citizens take an average of twenty-five prescriptions a year. No one wants to go back to the days before antibiotics, insulin, and other life-saving drugs, but doesn’t twenty-five prescriptions a year seem excessive? It is. I commonly see older patients who are taking over a dozen drugs a day: one drug to cover up a symptom and another to cover up the resultant side effect. The more drugs, the more risk of side effects.

Each year, more than 9.6 million adverse drug reactions occur in older Americans. Experts at the Food and Drug Administration (FDA) estimate that only ten percent of adverse reactions are ever reported. As we age, we tend to process drugs at a slower rate. Our liver and detoxification mechanisms are easily compromised. The risk of an adverse drug reaction is thirty-three percent higher in adults between ages fifty to fifty-nine than it is in folks aged forty to forty-nine.

Experts report that almost one-third of the drugs prescribed to the elderly aren’t needed and pose severe health risks. This is especially true for the psychotropic drugs, known as benzodiazepines (Xanax, Valium, Ativan, Serax, Klonopin, etc.). Benzodiazepines are central nervous system depressants that act on the neurotransmitter GABA (gamma-amino butyric acid). GABA acts as a calming chemical as it transmits messages from one cell to another. Directly or indirectly, these drugs influence almost every brain function and most other bodily systems, including the central nervous, neuromuscular, endocrine, and gastrointestinal systems.

The crippling side effects and addictive nature of these drugs has been known for at least forty years, yet doctors continue to prescribe them at an ever-increasing rate. Surveys show that over 5.6 million adults over the age of sixty-five are now taking benzodiazepines. A mouth dropping fifty percent of all women sixty and older will be prescribed a benzodiazepine drug. And since addiction often occurs within two to four weeks of starting these drugs, the majority of folks are now dependant on these drugs. Tolerance to the hypnotic (sleep) effects of these drugs may occur within one week. Symptoms of tolerance are identical to drug withdrawal symptoms and may include anxiety, panic, severe insomnia, muscle pain and stiffness, depression, suicidal thoughts, rage, heart and lung problems, and agoraphobia (extreme fear of public or crowded spaces). Tragically, only ten to thirty percent are able to successfully stop taking these drugs; most are addicted for life.

How sad to live a productive, active life, only to become addicted to a life-draining, mind-numbing drug, all because you couldn’t sleep or were a little agitated when the doctor visited the assisted living home the week before. Seventy-five percent of long-term-care residents receive psychotropic drugs. These drugs can severely impair mental clarity, especially in the elderly. In a study in the state of Washington, in forty-six percent of the patients with drug-induced mental impairment, the problem was caused by minor tranquilizers or sleeping pills (benzodiazepines, Ambien or Lunesta) and, in eleven percent, by antipsychotic drugs (antidepressants). How many of these folks are then erroneously diagnosed as having senile dementia, Alzheimer’s, or worse? Seniors taking benzodiazepines and tricyclic antidepressant medications (Elavil, Trazadone, Doxepin, Tofranil, etc.) are involved in a conservative 16,000 auto accidents each year. These same drugs cause over 32,000 seniors to fall and suffer hip fractures each year. And, sadly, this contributes to the death of more than 1,500 seniors each year. And, even though they are promoted as being safer than older drugs, SSRI’s aren’t without risk. Elderly patients taking Zoloft and other serotonin re-uptake inhibitor drugs (SSRI’s), had eighty percent more falls than those not on antidepressants.

Sleeping pills (hypnotics) such as Ambien and Lunesta are not technically benzodiazepines, but they act by the same mechanisms and have the same effects on the brain and body. Each year Americans consume five billion sleeping pills and, sadly, 15,000 Americans die from taking sleeping pills.

Both GABA and 5HTP, have a calming effect on the brain. Benzodiazepines work by increasing the effectiveness of GABA. But, as we’ve learned, these drugs have potentially lethal side effects. Instead of using a GABA additive loaded with potentially dangerous side effects, why not use an over-the-counter GABA or 5HTP supplement to reduce anxiety, stress, or help with sleep? Both work rather quickly, have few side effects, and can be found at the local health food store. Usually, only a small dose of GABA is needed, 500-1,000 mg taken twice daily on an empty stomach. The brain doesn’t readily absorb GABA, but another amino acid, known as L-theanine, can boost GABA levels. I often recommend L-theanine, an amino acid found in green tea. It has a calming effect on the brain. For anxiety related disorders, the usual dose is 50-100mg taken on an empty stomach, two to three times daily.

Research with human volunteers has demonstrated that L-theanine creates its relaxing effect in approximately thirty to forty minutes after ingestion. Supplementing with the supplement 5-hydroxytrryptophan (5HTP), a form of the amino acid tryptophan, helps raise serotonin levels. Studies show that 5HTP is as effective in normalizing moods as antidepressant drugs. 5HTP also boosts melatonin levels by 200 percent. The recommended dose is 100mg three times a day.

Several studies have demonstrated the effectiveness of folic acid in reversing depression. One study showed that ninety-two percent of the folic acid group made a full recovery compared with only seventy percent of the control group who took the standard prescription drug therapy. Those who received the folic acid spent only twenty-three days in the hospital, while those on prescription therapy alone averaged thirty-three hospital days.

Vitamin B-1, also known as Thiamin, is important for proper cell function, especially nerve cells. It is involved in the production of acetylcholine. This nerve chemical is directly related to memory and physical, as well as mental energy. A deficiency of Vitamin B-1 can lead to fatigue, mental confusion, emaciation, depression, irritability, upset stomach, nausea, and tingling in the extremities. Vitamin B-1 has been reported to be deficient in almost fifty percent of the elderly. Could this be one of the reasons pre-senile dementia and Alzheimer’s disease have increased so dramatically over the last few decades?

Vitamin B-12 helps form the myelin sheath that insulates nerve processes. This sheath allows rapid communication from one cell to another. A deficiency of B-12 can cause a reduction in mental acuity, evidenced by poor memory. Could this be the cause of their Alzheimer’s or senile dementia? Both Alzheimer’s and senile dementia can be due to an overlooked deficiency of vitamin B-12. Calcium, which is dependant on adequate stomach acid, is necessary for normal absorption of B-12. A vitamin B-12 deficiency is usually caused by malabsorption and is mainly seen in elderly patients taking antacids or acid blocking drugs (Tagament, Prilosec, Tums, Nexium, Zantac, etc.). Because this deficiency is routinely seen in the elderly, I believe everyone over the age of sixty should be taking sublingual vitamin B-12.

Isn’t it time we start Saving Our Seniors from life-draining, mind-numbing drugs? By educating our patients and the public that the right nutrients add years to their lives and life to their years, we could help Stop the Overdosing of our Seniors on dangerous drugs they don’t need.

Dr. Murphree is a board certified nutritional specialist and chiropractic physician who has been in private practice since 1990. He is the founder and past clinic director for a large integrated medical practice located on the campus of Brookwood Hospital in Birmingham Alabama and the author of 5 books for patients and doctors, includin, Treating and Beating Fibromyalgia and Chronic Fatigue Syndrome, Heart Disease What Your Doctor Won’t Tell You and Treating and Beating Anxiety and Depression with Orthomolecular Medicine.