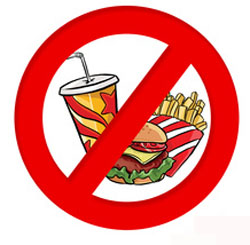 Movie producer/director Morgan Spurlock has been very helpful in illustrating the pro-inflammatory nature of our modern fast food eating habits. His documentary, entitled Supersize Me, has been airing on cable movie channels and is also available as a video/CD. If you have not seen Supersize Me, you need to see it now and waste no time about it…and then share the information with your patients.

Spurlock decided to find out what would happen to his mind and body, if he ate only McDonald’s food for every meal, for 30 days. He hired three different doctors to examine him before and during his 30-day Big Mac Attack, for the purpose of assessing any changes that may occur. None of the doctors thought that much would change, save for maybe an increase in triglycerides and cholesterol. Well, the docs were in for a shocker.

Spurlock set up the rules as follows: Every meal was purchased at McDonald’s, and he could eat anything he wanted, but was required to try everything on the menu at least once. This means that 30 McBreakfasts, and 60 McLunches/Dinners were consumed. He ordered regular sizes of everything, but would be required to “super-size” only if the attendant asked. In the end, his meals were super-sized a total of nine times.

Spurlock visited his physicians weekly for check-ups that included blood tests. Within a few weeks, the docs were urging Morgan to abandon the experiment, as they were very concerned for his health. Liver enzymes shot up so significantly that one of the physicians spoke as if Morgan’s liver was undergoing irreparable damage that is similar to what is found in alcoholics.

Spurlock also began to develop headaches and cravings for McFood.  He also had bouts of depression that were relieved by a McMeal, such that a dependency on McDonald’s began to develop. In this regard, Spurlock discovered that McDonald’s refers to its regular customers as “users,” while their very frequent customers are called “heavy users.”

At the end of the month, Spurlock had gained about 25 pounds, which took him nine months to burn off. It was incredible to witness what can happen to a healthy individual in just 30 days when consuming a diet that is nearly 100 percent inflammatory. On numerous occasions, Spurlock contacted McDonald’s headquarters for the purpose of conducting an interview about the outcome he experienced. Not surprisingly, his requests were ignored.

I visited the McDonald’s website and found the following information, which, if you did not know better, was describing a company that sells healthy food and exercise equipment.1 Dr. Cathy Kapica, a public health scientist and registered dietitian, joined McDonald’s in August 2003 as Global Director of Nutrition. She helps guide activities worldwide in the areas of menu choice, physical activity and education for McDonald’s balanced, active lifestyles commitment. Following are Dr. Cathy’s thoughts about her role at McDonald’s: “Bringing my nutrition expertise to a company as dedicated to customers and their well being as McDonald’s is an exciting opportunity. Because McDonald’s reaches millions of people every day, we can really make a positive impact on top health issues of the day by promoting smart eating and active lifestyles.”

Unlike what Dr. Cathy might lead us to believe, there are several reasons why the McDiet is inflammatory: It represents a high calorie diet and contains appreciable levels of trans-fats, omega-6 fatty acids, sugar, and salt, and is devoid of anti-inflammatory omega-3 fatty acids and the many important phytonutrients found in fruits and vegetables, and it is low in potassium and magnesium.

Trans-fats are found in all fast foods that are deep fried, as well as in the buns used for burgers and in some sauces. Trans-fats are known to disrupt essential fatty acid metabolism and also provide a diverse number of pro-inflammatory effects, such as increasing LDL and reducing HDL cholesterol, increasing insulin resistance, increasing lipoprotein A, and increasing free radical activity.2

Omega-6 (n-6) fatty acids are found in meat and chicken, and in the so-called vegetables oils, such as soybean oil and corn oil, which are used in fast foods. We are supposed to consume only modest levels of n-6 fatty acids; however, our modern diet is dripping in these oils. Research suggests that most of our chronic diseases, such as heart disease, cancer, diabetes, Alzheimer’s disease, osteoporosis, and many others, are promoted by n-6 fatty acids.2

Sugar is a problem that most are quite familiar with. Sugar consumption promotes hyperglycemia and hyper-insulinemia, syndrome X, and all the conditions related to syndrome X, such as type II diabetes, heart disease, hypertension, cancer, and many others conditions, even acne.3

We need to urge our patients to lower their fast food intake dramatically and eat fruits, vegetables, nuts, and omega-3 animal products in their place. Drinking lots of water is also important, and green tea functions as a powerful antioxidant. Supplementing with a multiple vitamin, magnesium, EPA/DHA, coenzyme Q10, and ginger/turmeric is also advisable. Taking this approach is anti-inflammatory and will counteract the trend toward super-sizing.

Dr. Seaman is the Clinical Chiropractic Consultant for Anabolic Laboratories, one of the first supplement manufacturers to service the chiropractic profession.  He is on the postgraduate faculties of several chiropractic colleges, providing nutrition seminars that focus on the needs of the chiropractic patient. Dr. Seaman can be reached by e-mail at [email protected].