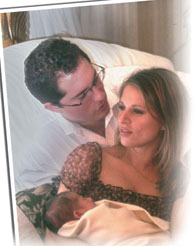 Lactation and Depression
Once the joyous day arrives and the healthy and happy baby has been delivered, it is time to address the postpartum nutritional requirements for both the mother and the baby.

The American Academy of Pediatrics has long advocated the use of breast milk as the primary food source for full-term infants.  In 1997, this advisory was extended to include premature infants.  The Academy recommends that mothers breast-feed their babies for at least one year.  There are two reasons for this:

1. Breast-feeding reduces infant illnesses.
A recent study published in Pediatrics (Hylander, Strobino, et al., 1998) has shown that breast-feeding significantly reduces the occurrence of common infant illnesses such as respiratory tract infections, pneumonia, ear infections, and gastrointestinal disorders.  In this two-year study of 977 babies, the number of babies who developed pneumonia in the first year of life declined by 33% and the cases of gastroenteritis decreased by 15%.

2. Breast milk is best for premature infants.
Many experts believe breast milk contains a number of compounds that “jump-start” an infant’s immune system and help fight off infections.  It is interesting to note that many of the immune-enhancing agents normally found in breast milk are found in higher concentrations in mothers who deliver prematurely.

It is important to remember that many troubled pregnancies stem from fatty acid deficiencies.  Essential fatty acids are precursors for prostaglandins, and I place great emphasis on their role in promoting conception, preventing spontaneous abortion, and allowing the mother to initiate labor and commence lactation after delivery.  Women generally have difficulty digesting and absorbing protein and lipids.  If the new mother cannot lactate or produce a sufficient quantity of breast milk, the nutritional cause is invariably a fatty acid deficiency.  This deficiency may even manifest in soreness and cracking of the nipple region.  An old, yet successful, remedy is to massage the area with cocoa butter.

Research has shown that vitamin A can reduce a child’s risk of death from measles (Hussey and Klein, 1990; D Souza and D Souza, 2002).  According to a study on Brazilian children, it can also help treat severe diarrhea (Barreto, Santos, et al., 1994).

Vitamin D deficiency is most common when the mother is a vegetarian or lacks adequate sun exposure.  Mothers who breast-feed should spend at least 15 minutes in the sunlight daily to increase their vitamin D levels.

Vitamin K deficiency may occur in some infants and neonates, including those with malabsorption disorders.  This may lead to unexpected hemorrhagic disease.  Babies are often given intramuscular vitamin K shots at birth to prevent this condition.

The B-vitamins pass from the mother to the baby via breast milk.  Deficiency is more common in mothers who are vegetarians.  In these cases, supplementation is necessary for mother and child.

Iron deficiency, according to the American Academy of Pediatrics, may be related to feeding cow’s milk to infants under the age of one year.  Frequent ear infections are found in these children as well.  Most baby formulas now contain iron to prevent such problems.  Iron deficiency is often related to protein deficiency.

Zinc deficiencies are common in premature infants and children with malabsorption syndromes.  Deficiencies are generally not found in breast-fed infants with non-deficient mothers.  However, it is believed that the entire human race is borderline zinc deficient.

Nutritional references list the signs of zinc deficiency as diarrhea, growth failure, alopecia, irritability, and anorexia.  Zinc deficiency is also implicated in skin lesions, such as diaper rash and candida manifestations.  These are also signs of fatty acid deficiency and excessive u    u sugar intake.  Individuals who do not digest lipids consume excessive sugars.

Postpartum depression is a condition that describes a range of physical and emotional changes that many mothers encounter after having a baby.  The appearance of any symptom signals exhaustion of the body’s ability to maintain homeostasis.  This means that normal functions are no longer occurring appropriately.  The functions are now occurring too fast, too slow, or incompletely because they are forced to compensate for stress.

The nutritional component of postpartum depression is serotonin deficiency.  Its symptoms include increased feelings of stress and tension, an exaggerated reaction when startled, a decreased ability to concentrate, and loss of appetite.  These symptoms are also consistent with sympathetic dominance.  The common nutritional component in both clinical syndromes is exhaustion of intracellular alkaline minerals, primarily potassium.  Both conditions are nutritionally related to the inability to properly digest and assimilate fatty acids, with compensation coming in the form of excessive ingestion of foods high in white sugar and flour.

Almost all protein foods contain much larger amounts of tyrosine than tryptophan.  There are a limited number of receptor sites for these amino acids.  Due to the abundance of tyrosine, these amino acids are not consumed in equal proportions.  Eating protein provides plenty of tyrosine for alertness chemical production; however, an insufficient amount of tryptophan is provided for calming chemical production.  Fortunately, after a protein meal, any unused tryptophan is attached to albumin and continues to be carried in the blood.  Then, when a high carbohydrate meal is eaten, insulin is released and allows tryptophan to attach to the receptor sites.  This increases serotonin production, which exerts a calming effect.

A study in the late 1980’s measured reflex times and memory of geriatric patients.  The factors were measured before and after the ingestion of separate protein and carbohydrate test meals.  The study confirmed that reflex times and alertness can be significantly improved within 30 minutes of digesting only protein.  It also confirmed that serenity and memory can be improved within 30 minutes of ingesting only carbohydrates.

Patients who have difficulty digesting lipids suffer from hydrochloric acid deficiencies and biliary stasis.  Invariably they consume excessive amounts of refined simple sugars and function quite well in this state until the symptoms of alkaline mineral deficiency, sympathetic dominance, and serotonin deficiency become evident.

Digestion begins in the mouth with the chewing of food and the addition of saliva that contains water, enzymes, and the alkaline minerals—sodium and potassium.  However, these salivary secretions are reduced during periods of emotional stress and psychic conditions, such as fear and anger.
It is plain to see that the body is locked in a continual reflex arc and its nutritional components must be addressed.  Improved protein and fat digestion, accompanied by reduced consumption of white sugar and flour, is the key to healthy mothers and babies.

Howard F.  Loomis, DC, president of Enzyme Formulations, Inc., has an extensive background in enzymes and enzyme formulations.  As president of 21st Century Nutrition, Inc., for fifteen years, he has forged a remarkable career as an educator, having conducted over 400 seminars to date, in the United States, Canada, Germany, and Australia, on the diagnosis and treatment of enzyme deficiency syndromes.  Call 21st Century Nutrition at 1-800-662-2630 for more information.