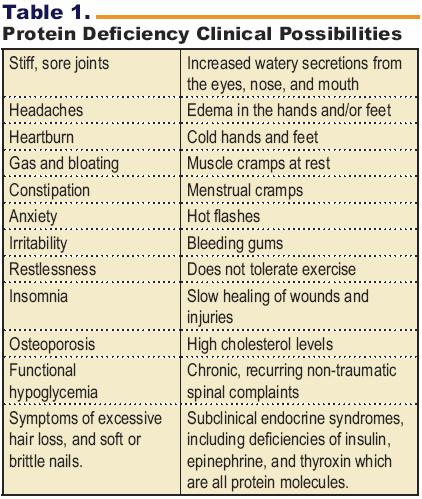 If the Chiropractic Profession were to “Discover the Secret” of improving protein digestion and assimilation, it could transform the health care marketplace almost overnight! That is not an exaggeration. Almost impossible to detect in its early stages with ordinary lab tests such as blood work, protein deficiency is behind many of the most persistent chief complaints for which patients enter your office. I estimate that at least 90 percent of all my female patients were protein deficient. The percentage was much lower for males, but especially significant in chronic back problems. Just examine the following list of clinical possibilities:

Protein defi ciency accounts for a large amount of infant mortality among malnourished children because specifi c antibodies against infection cannot be formed. Antibodies exhibit exactly the same chemical and physical properties of the plasma gamma globulins which are responsible for the body’s natural immunity to invasive agents. (See Table 2)

As extensive as the list in Table 1 is, it does not include fatigue and the often-heard complaint of being sick and tired of being sick and tired. This is so commonplace that it is usually ignored or even joked about by doctors and patients alike. When serious diagnostic investigations are made, the test results are usually normal and the patient is informed that nothing is wrong. Obviously the patient should be relieved that nothing serious is involved. But, without resolution of the vague symptomatology, their frustration lingers and they seek other means of treatment. Often many of these also fail but at a high price, since the expense must be covered out-of-pocket.

The medical profession is fi nding out that the old “try this and if it doesn’t work, we will do something else” routine has worn thin. By 1994, patient visits to so-called alternative health care providers were beginning to outnumber visits to medical providers. The economic “pinch” has gradually become stronger and now is driving the medical revolution toward alternative methods.

A cursory examination of the symptoms listed in Table 1 indicates that the allopathic approach in these conditions fails because they do not have anything to measure and, therefore, treatment with prescription drugs becomes hit-or-miss on a symptomatic basis. Obviously, it has been mostly miss. Once objective evidence of a disorder can be established, medicine’s track record improves. But, without objective evidence of pathological signifi cance, a vaccine or drug cannot be developed for the “sick and tired of being sick and tired“ syndrome. This should be good news to all who practice without the benefi t of pharmaceuticals. It means the patient is not diseased, and you will be able to help.

The answer for this common malady may lie within the body’s inability to handle stress (be it mechanical, nutritional, or emotional). Fortunately, the body handles all stress in a very predictable manner. Hans Selye was known for his landmark research that identifi ed the effects of stress on the human body. He found that stress, regardless of its source (chemical, mechanical, or emotional), always elicited a specifi c response. He called this process the General Adaptation Syndrome, and it consisted of the following stages:

• Alarm reaction to any stress;

• Resistance to or compensation for that stress;

• Exhaustion, if the stress is too strong or is maintained too long;

• The stages of disease, degeneration and, fi nally, death followed.

Symptoms do not occur until the body can no longer compensate for the stress being applied to it. And there can be no pathological fi ndings until the body reaches the stage of disease.

So the question is, what is lacking in a body in which symptoms are being manifested but is not yet evidencing alterations on objective tests such as blood, urine, X-ray, or MRI?

One obvious answer is that the body is not being supplied with adequate nutrients to nourish the organs responsible for the symptomatic pattern. Each organ and organ system is responsible for doing its part in maintaining, within narrow limits, the body temperature, pH, volume of extracellular fl uid, and the concentration of dissolved substances within that fl uid. This continuing process is called homeostasis. Seldom is homeostasis taken into consideration when deciding on a therapeutic course of action. Yet, if you can defi ne the price the body is paying to maintain homeostasis, you will know exactly how to solve the problem of “sick and tired of being sick and tired”!

As we turn our attention now to solving the riddle of being sick and tired, we can be sure of one thing: the body will maintain homeostasis or die. It maintains it all the time, everytime, and it does it with protein.

Despite all the claims made for the many combinations of vitamins, minerals, amino acids, and herbal extracts, the simple truth is that protein is the primary nutrient needed to maintain normal body functions. I didn’t say the others are not important. I said that, without protein, the others are totally irrelevant. To understand this seemingly outrageous statement, it is necessary to look at how the body uses protein to maintain the extracellular fl uid.

If detecting subclinical protein defi ciencies were easy, there would be no need for this article, because a big part of your formal education would have centered on correcting this insidious problem. I say “insidious” because blood tests for plasma proteins are usually normal outside of advanced disease states. Since homeostasis must be maintained ALL THE TIME and AT ALL COST, the body will catabolize its own tissues to maintain normal plasma protein levels in the blood. Consequently, the blood levels only drop when the body is exhausted. This results in protein defi ciency states going undetected until serious tissue damage has resulted. This brings us back to our basic premise: If protein defi ciency is undetectable in its early stages, then the only sign we have to go on is the symptom of an organ or organs being unable to meet the demands placed on it/them to maintain homeostasis.

Tissue catabolism for the purpose of maintaining homeostasis results in the sensation of fatigue and, if the condition continues uncorrected, the patient eventually becomes sick and tired of being sick and tired. Fortunately for us all, there are tissues the body will not tear down to use as protein sources, such as the heart and brain. Unfortunately, protein defi ciency can, and usually does, continue for long periods of time before a diagnosis of a specifi c disease process can be made.

While plasma proteins serve a host of important functions, it is important to remember that they are not used by the cells as metabolic fuel. Accordingly, they must be viewed quite differently from most other constituents of plasma such as glucose and cholesterol, which use the proteins as a vehicle for transport but are used by the cells.

The functions of the plasma proteins (which remain in the blood and are not used by the cells), are as follows:

• The concentration of plasma proteins determines the colloidal osmotic pressure of the blood. In other words, it maintains fl uid balance between the blood, tissue fl uid, and the cells. Defi ciency results in the symptom of cold hands and feet.

• Plasma proteins act as buffers to help maintain acid-base balance. The body must always maintain acid-base balance, but stress in either direction will result in indigestion. Indigestion results from either the inability to spare adequate acidity to produce suffi cient stomach acid or the inability to spare adequate alkalinity to activate the pancreatic enzymes. This relationship has been discussed in many of my previous articles over the past fi fteen years.

• Plasma proteins bind and transport many critical compounds, such as lipids, hormones, vitamins, and minerals. Many nutritional problems can be laid at the doorstep of inadequate plasma proteins. Inability to perform these functions can result not only in nutritional defi ciencies, but endocrine dysfunctions as well.

• Plasma proteins bind and detoxify potentially dangerous drugs and other toxic substances. Therefore, a body catabolizing itself to maintain adequate plasma protein levels can and does result in the symptoms of toxicity. One of these, obviously, is fever; but before an elevated temperature becomes necessary come the sensations of being sick and tired!

• As the body’s means of transporting nutrients and waste products, the plasma proteins can be at the root of many blood test deviations.

The Most Prominent Chiropractic Finding

The appearance of Pottenger’s saucer (the so-called anterior dorsal complex) invariably heralds a digestive problem and adrenal stress. Adrenal exhaustion and plasma proteins go hand in hand and result in the syndrome of being sick and tired of being sick and tired. Understanding protein digestion and assimilation will increase your clinical confi dence because homeostasis is a constant on which you can depend.

Howard F. Loomis, Jr., DC, President of Enzyme Formulations ®, Inc., has an extensive background in enzymes and enzyme supplementation. As president for fi fteen years of 21st Century Nutrition® (now the Loomis Institute ® of Enzyme Nutrition), he has forged a remarkable career as an educator, having conducted over 400 seminars to date, in the United States and internationally, on the diagnosis and treatment of food enzyme defi ciency syndromes. Dr. Loomis welcomes your comments or questions through the Loomis InstituteTM at 6421 Enterprise Lane, Madison, WI 53719 or by phone at 1-800-662-2630.