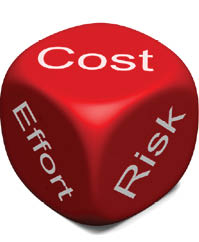 :dropcap_open:T:dropcap_close:he doctor of chiropractic in active practice has a lot to be concerned about and a host of issues and administrative and management steps that must be covered to make certain that all aspects of the practice are properly addressed on a timely basis. From taxes to your license to practice, these issues are demanding, and a frequent source of concern. If that weren’t enough, today’s increasingly complex and combative, if not outright hostile healthcare environment has seen a rapid evolution of a whole new array of potential exposures, quite apart from that old standard definition of “malpractice” where some in-practice accident or wrong decision results in physical injury to a patient. Today’s chiropractic professional liability insurance managers, if they are truly tuned in to the realities of today’s practice environment, have had to recognize the fast-paced dynamic of the threats and challenges DC’s in practice may face and respond with expanded and enhanced forms of coverage. This is one of my highest priorities.

Trends in malpractice continue to keep all health professions under serious pressure and, despite state efforts at limiting attorney’s fees, caps on damage awards, placing tighter limits on the timeframe for filing malpractice claims and other “tort reform” provisions, malpractice exposure is still the doctor of chiropractic’s greatest liability risk. This pressure is only going to expand with greater consumer access to health care and legal information through the Internet, growing consumer activism and a hungry legal profession willing to take on any claim, no matter how flimsy.

The chiropractic profession has the advantage of being one of the safest and most effective forms of health care, but we continue to be caught up in the greater malpractice environment in which the medical profession is very much on the defensive. This environment is stimulating a new wave of legal and consumer initiatives, with a “right to safety” becoming a new topic in public policy discussions on health care.

Activist consumer groups and attorneys are seeking to establish “judicial recognition” of a patient’s right to safety as a new element in the litigation mix. The aim of these activists is to seek to use this new “right” to stimulate greater caution and more effective injury prevention in hospitals and, ultimately, on the part of individual doctors. Because this sounds like a worthy cause, many politicians will likely be mobilized to promote it, and we will certainly hear more about these issues in the coming months. This is an environment in which you must have solid liability coverage that extends specifically to cover the new range of exposures the DC potentially may face. That range includes, but is not limited to, the following types of claims and charges:

I am not being the least bit alarmist or over-sensationalizing the new risks and exposures doctors are facing these days. HIPAA is real. Insurance audits and billing errors and omissions issues are a fact of modern day practice. Above all, in recent years, a new activism has emerged on the part of some state chiropractic boards in which actions against practitioners are being taken on the basis of questions of utilization and procedure that have never been a part of board scrutiny.

Today, perhaps in response to pressure from third-party payment agencies, or some misplaced desire to re-define the norms of chiropractic practice, some boards have acted against practitioners for “over utilization,” X-ray policies and very general communications with the public. These types of board actions clearly push the envelope into new territory and have many believing that such boards have grossly exceeded their authority. Still, unchecked by the courts or the state legislatures, such boards can lay de facto claim to new authority, and this means that you will need to be on your guard even more than in the past.

Real cases highlight the list of strange and completely unforeseen situations in which DC’s are finding themselves. In one state, a doctor was cited for misleading the public on the basis of the content of articles published in recognized journals posted or linked on his practice website. In another case, a DC was cited for overutilization for seeing a patient 12 times following a high-speed rear-end auto collision. Still another doctor was cited for failure to repay an insurance company for the care of a small child because no “series” of X-rays was taken, in spite of the fact that every safety and utilization guideline states that X-rays of children are to be avoided except in very specific situations, of which this was not one.

The source of this new wave of complaints is also of curious interest because almost none of these complaints dealing with practice norms come from consumers. Boards are taking the initiative themselves, responding to third-party payers and, sadly, other chiropractors, as the basis for their aggressive actions. The shaky ground that they are moving onto, however, has also prompted a number of lawsuits by the DC’s who are on the receiving end of such complaints, and those DC’s almost always win in the courts. The financial cost and distraction of such a suit is a very high price to pay, especially when in the eyes of most chiropractors and chiropractic organizations, the behavior cited as inappropriate is seen as well within the established norms of care.

As we consider the forces behind the new dynamic of professional liability, it is also important to look at the greater economic and regulatory, and even the political environment, since those factors are having a direct impact on professional liability challenges. The rules and regulations covering the delivery of and payment for health care services are becoming increasingly stringent and detailed and are being enforced by a highly driven bureaucracy with greater authority than ever before. The current economic crises in state and federal government programs is a strong motivator for more and more stringent enforcement, since managers of those programs have discovered that fines and re-payment of benefits is a major source of new revenue. Because the states and even the federal government are desperate for money, the pace and volume of enforcement and claims and charges against health care professionals are likely to greatly expand in the coming months. They are doing this because they see the potential for big money in fines and recoveries.

According to an October 10, 2011, US Department of Health and Human Services (HHS) press release, “In 2009 alone, more than a billion dollars in health care fraud monies have been recovered under the False Claims Act.” States are following suit and looking for every possible means to delay payments for covered services in their Medicaid programs, reduce payments or demand repayment sometimes on the flimsiest of premises. Private insurance is perhaps embracing the repayment or denial wave with the greatest gusto. Most DC’s have gotten the letters demanding repayment based on some new policy or finding. These are all situations where the doctors of chiropractic will be obliged to defend themselves and their care decisions against a whole new range of charges.

The federal government is massively beefing up its fraud and enforcement efforts. In May of 2009, the US Department of Justice (DOJ) and HHS announced the creation of the Health Care Fraud Prevention and Enforcement Action Team (HEAT) and the Obama Administration has announced that fraud prevention and enforcement is a “cabinet level” concern. In a similar vein, HHS has also established what they call their Senior Medicare Patrol (SMP) Program through tens of thousands of senior citizen volunteers who are being mobilized to supplement anti-fraud efforts. In these new efforts, money, its recovery or denying payments, is a top priority of policymakers. No one has said much about injured patients here.

All organizations and individuals in the chiropractic profession absolutely detest fraud and genuine abuse. I encourage any patient or provider who observes genuine fraud to report it immediately. What is alarming, however, is that, now, disputes over “medical necessity” are being thrown into the same category as billing for a service that was never delivered or some other outright criminal act. Here is how the CMS website defines “fraud & abuse”:

What Is Fraud & Abuse?

What this means is that someone’s opinion about “necessity,” if it happens to disagree with yours, places you in jeopardy like never before. This means that your clinical records will not only need to document your findings and the rationale for care for case management and reimbursement, but to defend yourself against a new wave of financially driven “necessity” claims. Here, as has always been the case, your patient records are your first and best line of defense. As well, sound chiropractic clinical guidelines are invaluable.

Doctors of chiropractic must be ever aware of the rapidly changing nature of the challenges they will be obliged to deal with in the months and years ahead. If they are smart, they will seek out the most comprehensive, proven and effective malpractice coverage they can find. Remember, it is not about “malpractice” in the old sense of an injured patient seeking redress for their pain and suffering anymore. Professional liability coverage must work to defend against charges that range from lapses in documentation, which some clever program manager might enhance into allegations of fraud, to complaints about your advertising to a state board. You need help and your malpractice company should be your most reliable ally in dealing with today’s new and unforeseen challenges.