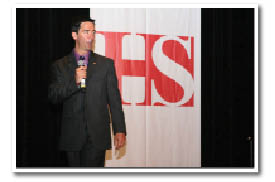 :dropcap_open:A:dropcap_close:t the helm of the world’s largest chiropractic franchise, you might think Dr. Chris Tomshack is finally ready to rest easy.

As the CEO of HealthSource Chiropractic, his company has already outpaced every other franchise in its category, but even the man who’s been nicknamed chiropractic’s very own “Colonel Sanders” claims he’s only just begun to stir the pot.

“I always knew HealthSource would be this big, and it’s poised to continue to lead chiropractic into the future,” Dr. Tomshack says. “In the next five years, I foresee us being at about 1,000 clinics, delivering the absolute very best care possible to millions of patients, and driving the perception of chiropractic in America. It won’t be long before chiropractors can finally assume their rightful place in healthcare.”

When talking to Dr. Tomshack, two words come to mind: tenacious positivity. It isn’t unusual to hear “fantastic” and “phenomenal” in the same sentence, and congratulatory fist-bumps occur sporadically throughout the day. Even the inscription on his red bracelet, which is given to every member of HealthSource, oozes positive thinking: “What I think about I bring about.”

But, to say he’s a chiropractic optimist is a little shortsighted.

For a DC who got his start literally living in the upstairs of his own small office, Dr. Tomshack says he simply learned to make the best out of his situation, while striving to make his situation better.

“My patients and I would play this game where we’d try to guess what’s for dinner,” he says. “My wife Lisa, who also worked the front desk, took X-rays and did the billing, would step away to the kitchen behind our tiny therapy room, and the smells would fill up the entire office. We made sure we were always having fun, especially when our 115-pound pet Rottweiler would sneak out from the living room and scare the living daylights out of patients—you couldn’t help but laugh.”

Dr. Tomshack reflects back on old memories with a smile—the cutting of his opening day ribbon, reading to his kids on his first adjusting table, and even the bulldozing of his first office to make room for a larger one.

In fact, a glimmer of hope and inspiration tends to poke its way into most of his conversations, even when talking about subjects like the ever-changing scope of healthcare and its effect on chiropractic.

“We’ve got massive changes taking place each and every year and, unfortunately, the average DC has no idea that they’re going to be audited in the next 12 months,” he says. “It takes much more effort these days to stay on top—not only to be successful, but legal. I believe it takes systems to survive today, and it’s the systems that HealthSource provides that are helping to keep our DC’s safe.”

The HealthSource “systems” were developed and perfected during Dr. Tomshack’s initial years as an in-the-trenches DC, and now make up the backbone of the HealthSource franchise. They assist HealthSource docs in everything from their initial report of findings to tracking the return on investment of every marketing effort—to the penny. Simply put, the HealthSource systems serve as a GPS-success guide for DC’s, allowing them to track, control, and evolve their office for optimum results, Dr. Tomshack says.

But success, and even the systems, didn’t just fall into Dr. Tomshack’s lap. He, like countless others just entering the field, initially struggled to build a growing patient base, and was forced to learn how to succeed by going back to business basics.

“My very first day, I had eight new patients, which was an incredible start,” he says. “But then it slowed to the point where the first year was very unsuccessful, and that’s when I began to rely on my business degree. I started studying the industries and business systems outside chiropractic, and tried to figure out the best way to import them into chiropractic.”

A Palmer College of Chiropractic alum, Dr. Tomshack credits his late-father, Michael Tomshack, for pushing him towards majoring in business, while still an undergraduate at Ohio University.

“We all heard the stories of those doctors that could do well financially, but when it came time to balancing their check book and their business—they just couldn’t do it,” he says. “So, in addition to my science classes, I made sure to build up my business know-how as well.”

Dr. Tomshack’s father played a fundamental role in his life, he says, not only as a father, but as a business mentor.  A lifelong salesman, manager and entrepreneur, Michael Tomshack was a dynamic part of the HealthSource team before passing away in 2006. His tutelage, Dr. Tomshack says, taught him that you couldn’t simply sit behind a desk and be successful—you need a phenomenal work ethic, and you need to know your business and your patients.

“To sit back behind your desk or adjusting table and merely think that your clinic is going to be successful is ludicrous,” he says. “Our profession today is more competitive than ever before—success takes hard work, but it also requires solid business systems.”

:dropcap_open:To sit back behind your desk or adjusting table and merely think that your clinic is going to be successful is ludicrous.:quoteleft_close:

It wasn’t soon after that Dr. Tomshack saw his fledgling practice begin to take flight. He would go on to build three additional HealthSource clinics throughout the Cleveland suburbs, and it was around that time that he realized his business “secret” could be molded into a plug-in-play system all chiropractors could “clone” and implement on their own.

“I knew we had systems that could be duplicated,” he says. “And then the realization came that this is the perfect franchise concept for other chiropractors to take advantage of, greatly shortening the learning curve of success.”

The first HealthSource franchise was sold in April of 2006, and another 49 more would sell throughout 19 U.S. states by year’s end. The following year, HealthSource introduced HealthSource Weight Loss Systems to franchisees, while also wrapping up another successful year with 99 franchises sold.

In 2007, HealthSource introduced its Regional Developer model to allow an on-site team to work locally in basically all areas of the country. There are now 25 groups of Regional Developers overseeing 42 franchise regions throughout the U.S. The corporate team recently grew to 14 to help accommodate and expedite questions and concerns, providing anything and everything HealthSource owners could possibly encounter while running their chiropractic clinic, according to Dr. Tomshack.

The tremendous growth of the young company didn’t go unnoticed.

HealthSource caught the attention of several publications including Inc., Entrepreneur, The Franchise Times, and Delta Airlines Sky magazine, which all touted its rousing success.

But, while the franchise has continued to steadily grow, Dr. Tomshack says it’s the business roots of HealthSource that has allowed it to evolve and prosper in the “new economy.”

“My father always cautioned me never to focus solely on growth,” Dr. Tomshack says. “He would reference the Wendy’s restaurant franchise of the mid-80s when they were so focused on growth that they let their product slip. First and foremost, the best marketing in the world can’t fix a bad product. That’s why, to this day, we remain entirely patient centric—focused on what’s best for patients in 2011.”

HealthSource’s patented Progressive Rehab program is one example of how patients are encouraged and taught to keep themselves injury-free through exercises at the clinic that can eventually be done at home.

When coupled with chiropractic care, patients not only feel better for longer periods of time, Dr. Tomshack says, but can get back to living a more active lifestyle.

:quoteright_open:With 300 clinics currently throughout 43 U.S. states, HealthSource appears to have all the right ingredients when it comes to expanding the role chiropractic plays in people’s lives.:quoteright_close:

“The HealthSource name has become synonymous with pain relief and wellness,” he says. “Patients know that they can walk into any of our more than 300 clinics throughout the country, and expect the same level of extraordinary care they’re accustomed to.”

HealthSource has also begun to “give back” to the profession by playing a larger role in the development of young DC’s. In addition to teaching business curriculum courses at Life College and Northwestern University, HS LaunchU was created to assist recent graduates, and soon-to-be doctors, providing them with a foolproof road map to success.

“The chiropractic profession is changing at breakneck speed,” Dr. Tomshack says. “Not a whole lot of changes took place from 1895 to 2005, but it’s a whole different animal now. We want to make sure our younger docs have the tools to succeed, and a team they can depend on.”

While HealthSource increases its role in the community, chiropractors throughout the world continue to tap in to its success.

In fact, as this story is being written, a steady stream of more than 50 interested chiropractors are making their way to a blustery, and very snow-covered Cleveland to attend a HealthSource Discovery Day—a day that Dr. Tomshack describes as “kicking the HealthSource tires to see what we’re all about.”

They’re slated to come from all areas of the country—Texas, South Carolina, Michigan, even Ohio, to name a few—and each will be encouraged to ask questions, and share their own stories and concerns.

Dr. Tomshack admits that, while many may be interested in purchasing their own HealthSource franchise, each is encouraged to go home and think about it.

“Even if they qualify, we tell all of our attendees to leave the checkbook at home,” he says. “The bottom line—there’s never any obligation to simply find out more about what we do. I want everyone to see, in person, who we are, and what we’re all about.”

With 300 clinics currently throughout 43 U.S. states, HealthSource appears to have all the right ingredients when it comes to expanding the role chiropractic plays in people’s lives.

And, as more and more HealthSource clinics pop up in the nooks and crannies of the country, Dr. Tomshack reaffirms that the end goal isn’t about trying to sell something—it’s more about sharing a secret.

“This has always been about raising the bar for chiropractic,” Dr. Tomshack says. “I’m just eager to meet some potential HealthSource family members, and help teach them how to succeed.”