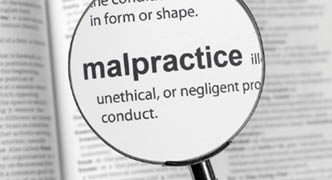 :dropcap_open:M:dropcap_close:alpractice—a word any medical practitioner shudders to hear. However, in today’s ever increasingly litigious society, it’s really not a question of if you’re going to be sued but, rather, when. Even if you have the best practice in the country, with the most careful examinations and advanced treatments, eventually you are likely to be involved in a malpractice suit of one kind or another, warranted or otherwise.

Basics of Chiropractic Malpractice Insurance:  Though it’s hard to generalize when it comes to insurance policies, there are a few things that you can expect from any basic modern chiropractic malpractice insurance policy. First, there are two types of policies: occurrence and claims-based. An occurrence policy will cover incidents that occur while the policy is still in effect, while a claims-based policy covers any claims that are submitted to you in writing during your policy period—i.e., it can cover you retroactively. There are benefits to both kinds of policies, so be sure to do your homework and shop around before you choose.

As far as basic policies go, liability coverage can range from 100,000 to several million dollars, depending on your policy and on the regulations in your state. Different policies are available to cover only basic claims, claims of negligence, and even claims of sexual misconduct, which chiropractors are unfortunately sued for fairly often.

Finally, many newer policies are offering coverage for those chiropractors who also work as massage therapists or acupuncturists. This can be a godsend for alternative chiropractic practitioners, since they no longer have to buy three policies for one practice.

There are several areas of concern when it comes to chiropractic malpractice suits. Since chiropractors do so much work with the spine, it is fairly common for them to be sued for aggravating a disk. Additionally, chiropractors often come under fire for allegedly causing strokes by their adjustments, since they do often work with areas so closely connected to the brain.  Besides that, patients who feel more pain after a treatment often sue their chiropractor for malpractice, as do those who are simply unsatisfied with how long the treatment is taking.

Unfortunately, many patients base their claims solely on how they feel, especially when it comes to issues of timing or pain relief. Even if a patient is progressing as quickly as their condition will allow, or even if they themselves are causing their treatment to proceed slowly because of their lifestyle or refusal to change certain habits, they could sue simply because they feel disappointed in the way in which you handled their situation.

There are several other nebulous areas that are “danger zones” for chiropractors as well, notably, failure to diagnose and failure to refer. Cases have been brought to court for as little as a chiropractor’s failing to instruct a client to seek an alternative treatment for a sprain. In another real-life example, a patient who went to a chiropractor for long-term pain became disappointed with the treatment and sought another practitioner, only to be diagnosed with a herniated disk. The other practitioner convinced the patient that the chiropractor caused or failed to diagnose the herniated disk, thus leading them to sue the chiropractor.

One of the top ten causes of chiropractic lawsuits is for alleged sexual misconduct. Though this is not the primary reason that chiropractors are sued—contrary to the widespread rumor, it is a major cause of concern and a risk area for chiropractors.

How You Can Limit Risk:

Though all of this may sound very intimidating, there are ways that you can limit your risk when it comes to being sued for malpractice suits. The first and by far the most important thing you can do is to keep appropriate documentation. When it comes to nebulous claims of the time it takes to complete a treatment, the effectiveness of your treatment plan, or your diagnosis, documentation will be your best defense.

By keeping clear and accurate notes about each and every session with your patient, the treatment plan that you decide on, how that patient is progressing, and the patient’s understanding of that plan, you can save yourself an infinite amount of trouble in court. In fact, many cases are dismissed out of hand because of good documentation. This is extremely as simple as using a comprehensive easy to do with all the new chiropractic Electronic Health Records with outcome assessments, SOAP note macros, and online patient intake forms and documentation built right in software.  So there is really no excuse for not keeping the best possible documentation you can.  Developing a relationship with your clients can also help to prevent malpractice claims.  Each person in the practice should make it a point to be polite and approachable to clients in order to develop the best relationship possible with them and prevent any event which could foster resentment in any kind of situation.

Additionally, chiropractors need to be very clear with their expectations and treatment plans when it comes to working with patients. If you have clear documentation that you have shown the patient a treatment plan (for example, you have them sign off on it every time they come in for treatment, or have them write a brief assessment of each session on your SOAP notes), then it is very hard for anyone to claim that they didn’t know what you were going to do or believed that you had an irresponsible treatment plan.

With a good insurance policy in place, and as long as you avoid your “danger zones” while keeping good accurate, thorough and up-to-date documentation, the vast majority of malpractice claims will not stand the test of court.