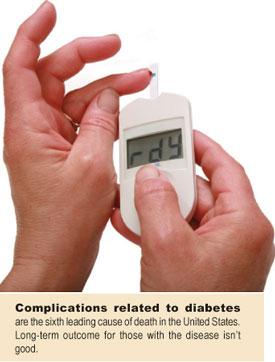 Over nineteen million Americans suffer with type 2 diabetes. The U.S. Centers for Disease Control and Prevention (CDC) relates that the incidence of type 2 diabetes (formerly known as adult-onset diabetes) has risen by 33 percent in the past decade and three out of every fifty American adults currently have this diet-related condition. Complications related to diabetes are the sixth leading cause of death in the United States. Long-term outcome for those with the disease isn’t good.

People with type 2 diabetes have an average life expectancy of fifteen years less than those without diabetes. Heart disease and stroke account for about 65 percent of deaths in people with diabetes. The risk of stroke is also found to be two to four times higher in people with diabetes. Unfortunately, the news has gone from bad to worse with the FDA’s warning about the dangers of two common diabetic drugs: Avandia and Actos.

About one million Americans are currently taking Avandia, which sells for between $90 and $170 for a one-month supply. Its U.S. sales topped $2.2 billion last year.

Dr. David Graham, a drug safety officer with the FDA’s Office of Surveillance and Epidemiology, estimates that Avandia has caused as many as 205,000 heart attacks and strokes, some of them fatal, between 1999 and 2006. Graham’s analysis indicates that, since Avandia was approved, some 80,000 patients have died from the drug’s side effects. For every month that Avandia is sold, he said, 1,600 to 2,200 patients will suffer more of these events.

GlaxoSmithKline LLC, based in London, told the agency of the risk two years ago. Yet, the FDA failed to pass along the warning to the one million Americans who already take the drug. There are probably 2.2 billion reasons why this information wasn’t made public until this year. Only after researchers at the Cleveland Clinic forced the FDA to take notice did the word get out to the media.

The FDA has placed a warning on the labels of these drugs but has elected not to remove them from the market. Its continued approval of this drug, therefore, is a kind of death sentence for American consumers, racking up a body count so large that it already exceeds the total number of Americans killed in the entire Vietnam War!

Since three quarters of all diabetics die from heart disease related conditions, doesn’t it seem strange that the drugs doctors commonly recommend for controlling diabetes actually increase the incidence of cardiovascular related deaths? I believe it does. So does Gerald Del Pan, director of the Office of Surveillance and Epidemiology, who has voiced his concerns about Avandia by stating, “Cardiovascular disease being the leading cause of death of people with diabetes, having a treatment that causes that is something that doesn’t make sense to me.”

It doesn’t make sense to me either. And to add fuel to the fire, recent evidence suggests thiazolidinediones are associated with an increased risk of peripheral fractures in post-menopausal women.

This is not the first time warning bells rang concerning diabetic drugs. Prior to Avandia and Actos, the drug Rezulin, another thiazolidinedione, was pulled from the market due to safety issues. Rezulin was a “fast track” drug that went through an abbreviated version of the FDA’s approval process and was approved over the objections of several FDA scientists. On March 21, 2000, per the FDA’s request, the manufacturer finally issued the Rezulin recall after its controversial run on the U.S. market. It was suspected of causing 391 deaths, including hundreds of liver damage cases.

Other commonly used diabetic drugs, known as sulfonylureas (DiaBeta, Micronase, Glynase, Diabinese, Glucatrol, Orinase, Tolinase, and Amyrel), are also associated with an increased risk of heart attack and strokes. Orinase has been shown to increase the risk for heart attack and stroke by 300 percent and increases the risk of death from all illnesses by 250 percent over those taking a sugar pill. These drugs carry a warning label, which states, “The administration of oral hypoglycemic drugs has been reported to be associated with increased risk of cardiovascular mortality as compared with treatment with diet alone or diet plus insulin.”

Insulin sensitizers or enhancing drugs, including Metformin (Glucophage) and Phenformin, are known as biguanides. Metformin is now the most commonly prescribed oral anti-diabetic drug in the world. It works by increasing insulin sensitivity in the liver. It also has a number of other beneficial effects, including weight loss, reduced cholesterol-triglyceride levels, and improved endothelial function.

Metformin is tolerated better than many other anti-diabetic prescription drugs. However, it’s not without potential health risks. Those taking Metformin should be made aware that it’s associated with lactic acidosis. Lactic acidosis is a rare but serious complication that can occur due to glucophage accumulation and is fatal 50 percent of the time. Phenformin was pulled from the market in 1977 due to an increased risk in developing lactic acidosis; Metformin has avoided being banned by the FDA. And, by the way, before it was pulled from the market, the warning bells rang loud and clear: Phenformin increases the risk of heart disease deaths by 300 percent.

Once again, like so many illnesses, once you get past the smoke and mirrors, the recommended medical “cure” is often worse than the illness. The type-2 diabetic now faces a dilemma. Do they suffer with the advances of unchecked diabetes, including heart attack, stroke, and an increased risk of cardiovascular disease death? Or do they take conventional anti-diabetic drugs and increase their risk of heart attack, stroke, and death from cardiovascular disease?

Thankfully, like a lot of dilemmas, there are other choices available. In Part 2 of this article, we’ll look at how diet, exercise and specific neutraceuticals can help prevent and often reverse type 2 diabetes. And these protocols don’t increase the risk of death, pancreatitis, broken bones, or lactic acidosis.

Rodger Murphree, D.C., has been in private practice since 1990. He is the founder of, and past clinic director for a large integrated medical practice which was located on the campus of Brookwood Hospital in Birmingham, Alabama. He is the author of Treating and Beating Fibromyalgia and Chronic Fatigue Syndrome, Heart Disease What Your Doctor Won’t Tell You, and Treating and Beating ANXIETY and Depression with Orthomolecular Medicine. He can be reached at www.treatingandbeating.com, by email at [email protected] or by calling 1-205-879-2383.