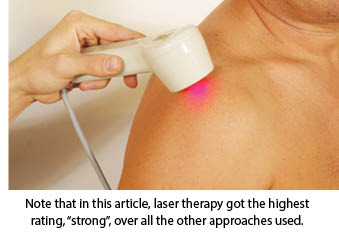 :dropcap_open:T:dropcap_close:here are literally hundreds of good scientific reasons. First, let’s cover some terminology.  Laser therapy is known by several names. “Low level laser therapy” (LLLT) is my personal favorite and is the term many in the scientific community are using. “Cold laser” is another popular term.  Why cold laser? Well, it’s not hot.  However, when I used that term in my office, my patients would say something like, “It doesn’t feel cold. Is it on?  What does the cold do for me?”  In 2003 the North American Association of Laser Therapists (NAALT) adopted the terms phototherapy, or photobiomodulation.  For the purposes of this article I am going to use the term low level laser therapy.

So as a DC, what about low level laser therapy should draw your attention?  Consider just a few of the hundreds of positive research papers that have been published which would pertain to conditions we see every day.  A search using “LLLT” on the National Institute of Health or Pub Med sites will keep you entertained with laser research for several years.
Consider a paper in the Journal of Manipulative and Physiological Therapeutics (JMPT), 2009 Jan; (1):14-24 titled, “Chiropractic management of myofascial trigger points and myofascial pain syndrome: a systematic review of the literature.” Through a review of 112 articles, the Council on Chiropractic Guidelines and Practice Parameters found “moderately strong evidence supports manipulation and ischemic pressure for immediate pain relief at MTrPs, but only limited evidence exists for long-term pain relief at MTrPs. Evidence supports laser therapy (strong), transcutaneous electrical nerve stimulation, acupuncture, and magnet therapy (all moderate) for MTrPs and MPS, although the duration of relief varies among therapies. Limited evidence supports electrical muscle stimulation, high-voltage galvanic stimulation, interferential current, and frequency modulated neural stimulation in the treatment of MTrPs and MPS. Evidence is weak for ultrasound therapy.”
Note that in this article, laser therapy got the highest rating, “strong”, over all the other approaches used.  I have used many of these very therapies in my office.  I can relate first hand that low level laser therapy is superior in offering faster and longer-lasting relief.  With the addition of laser to their chiropractic care plan, I have noticed that my patients’ VAS pain scores drop more quickly and their outcome assessment scores improve faster.
I will again draw from the JMPT for this next attention-getting paper:  “Chiropractic manipulative therapy and low-level laser therapy in the management of cervical facet dysfunction: a randomized controlled study.”  “Sixty ambulatory women between the ages of 18 and 40 years with cervical facet joint pain of more than 30-day duration and normal neurologic examination were randomized to receive one of three treatment options: (1) CMT of the cervical spine, (2) LLLT applied to the cervical facet joints, or (3) a combination of CMT and LLLT. Each participant received six treatments in three weeks. The main outcome measures were as follows: the Numerical Pain Rating Scale, Neck Disability Index, Cervical Range of Motion Instrument, and Baseline Digital Inclinometer. Measurements were taken during weeks 1 (baseline), 2, 3, and 4.
Results:  No differences existed between the three groups at baseline. A significant difference was seen between groups 1 (CMT) and 2 (LLLT) for cervical flexion, between groups 1 (CMT) and 3 (CMT + LLLT) for cervical flexion and rotation, and between groups 2 (LLLT) and 3 (CMT + LLLT) for pain disability in everyday life, lateral flexion, and rotation. Conclusion: All 3 groups showed improvement in the primary and secondary outcomes. A combination of CMT and LLLT was more effective than either of the two on their own.”
This is a well executed study, again demonstrating superior outcomes when CMT and LLLT were combined.
From the publication Pain Medicine, August 2010, there is an interesting study titled “Low-level laser therapy for acute neck pain with radiculopathy.”   In a double-blind placebo-controlled randomized study, sixty subjects received a course of 15 treatments over 3 weeks with active or an inactivated laser as a placebo procedure. The conclusion? LLLT provided more effective short-term relief of arm pain and increased range of neck extension in patients with acute neck pain with radiculopathy in comparison to the placebo procedure.
In the Journal of the Canadian Chiropractic Association Don Fitz-Ritson, DC, FCCRS, DACRB stated:  “Chiropractors should view lasers as a modality which could be used in tandem with chiropractic care to provide better patient care and broaden the scope of neuromusculoskeletal conditions treated.”
I must say that I have to agree wholeheartedly.  Then consider this:  LLLT is also FDA cleared for the treatment of muscle and joint pain, arthritis, muscle spasms, relief of stiffness and more.
Please take some time to look at the science that is pointing to the positive effects of low level laser therapy.  I am sure you will be impressed.  Join me in next month’s issue when we will be discussing how to go about choosing the best laser for your practice.
Christopher Carraway, DC, DIBCN, CLS, 1985 Graduate of Life Chiropractic College Chiropractic Neurologist, International Academy of Chiropractic Neurology National Institute of Chiropractic Research, Charter Member Advanced Proficiency Rating with Activator Methods Medical Advisory Board and Senior Clinical Advisor, Multi Radiance Medical Advanced Laser Integrations, CEO/President CE Certified Laser Therapy Instructor