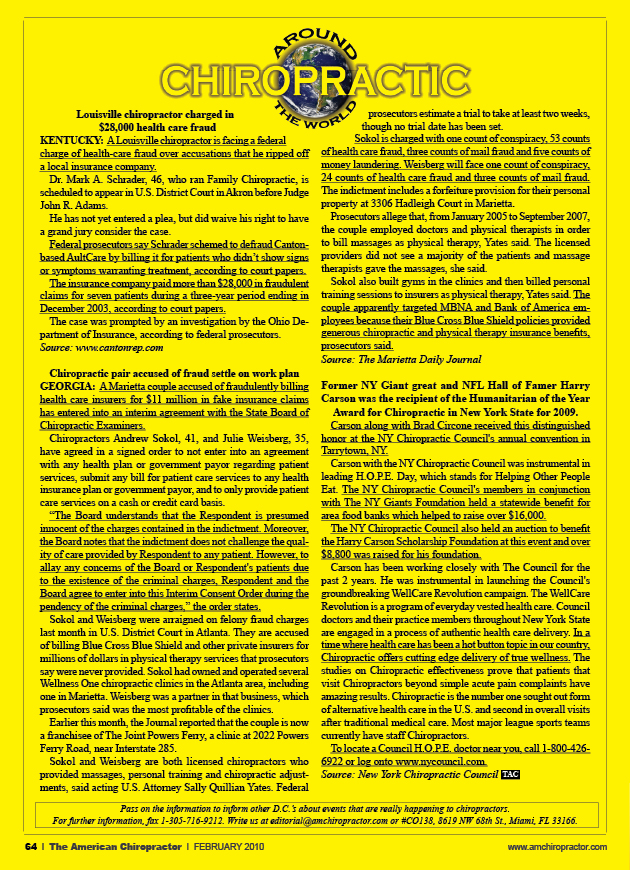 NEBRASKA: Fido could get chiropractic treatment under a bill advanced by state lawmakers.

The bill (LB463) from Sen. Cap Dierks of Ewing would let a chiropractor or other therapist treat an animal. Lawmakers say the bill came about after several chiropractors got cease-and-desist orders, telling them not to practice on animals.

Dierks says he’s seen chiropractic work on dogs with disk problems and nervous horses that are in pain.

The bill won first-round approval in early April. It also permits civil penalties against those who engage in unauthorized veterinary practice.

CALIFORNIA: The Foundation for Chiropractic Progress (www.yes2chiropractic.org), a not-for-profit organization dedicated to increasing public awareness of chiropractic, announced that Retired U.S. Army General Officer (G.O.) Becky Halstead has agreed to serve as its spokesperson and share with the public her positive experiences with chiropractic care. Halstead served 27 years with the United States Army, is the first female in U.S. history to command in combat at the strategic level by commanding the highest level organization for logistics (3rd Corps Support Command) in the Combat Theater of Iraq, and is a recipient of the 2007 national Women’s History Project Generations of Women Moving History Forward.

Halstead says that the hands-on, active care of doctors of chiropractic and their advice on a healthy lifestyle are essential to our military men and women.

“It is both an honor and pleasure to welcome General Halstead as a supporter,” says Kent S. Greenawalt, president of the Foundation. “Halstead exemplifies extraordinary service to this nation, and her participation as a spokesperson is a compelling message to professionals and patients, alike.”

TEXAS: A woman who sought a neck adjustment then turned and sued the chiropractor for “unwanted, intrusive contact,” left the Jefferson County courthouse empty handed Wednesday, April 15, as a jury found no negligence on the chiropractor’s part.

As the Record has reported, LaDonna Burge—who claimed she had an adjustment done “against her will”—filed suit in June 2007 against Dr. Scott Kerr, owner of the Community Chiropractic Center, and his colleague Dr. Ken Arola.

Before performing an adjustment, Drs. Kerr and Arola requested that Burge obtain permission from her surgeon. When the surgeon gave her the green light, Kerr and Arola consented to the adjustment and Burge submitted to two sessions in early December 2006.

A few months later, Burge, the receptionist for Community Chiropractic, filed a lawsuit against the chiropractic center, Kerr and Arola in Jefferson County, claiming the adjustments were performed “against her will” and had worsened her already traumatized neck.

The plaintiff argued that a prudent chiropractor would know that an adjustment on someone who had recently undergone spinal surgery should not be done until the fused vertebrae were solid—which can take up to one year. However, court documents show Community Chiropractic Center professionals did X-ray Burge and determined that the fused vertebrae were solid before performing the adjustment.

But jurors found no evidence that Dr. Arola was negligent, and awarded Burge nothing.

Simsbury Chiropractor Gets Six Weeks in Jail for Fraud

From August 2005 to December 2007, Bolognese employed two physicians in his practice and used their provider numbers to file claims for services on days they did not work. The fraudulent claims, Bolognese admitted, amounted to $573,036.

The government asked for a prison sentence of 30 to 37 months to penalize Bolognese for his conduct and to set an example. Bolognese’s attorneys argued for no prison. They said his conduct was a result of his poor business management skills and his reliance on someone else to do his billing. They also claimed a prison sentence would harm his young children and his patients, and diminish his ability to make restitution.

Prosecutors objected to U.S. District Judge Janet Bond Arterton’s sentence of six weeks. Bolognese will also be on probation for three years after his release.

Bolognese, in addition to agreeing to make restitution to Blue Cross and Blue Shield, has agreed to sell the building that housed another of his businesses and to turn that money over to the government go toward restitution.

Bolognese, 37, has also placed his home on the market to cover the restitution. He’s asking $1.049 million.