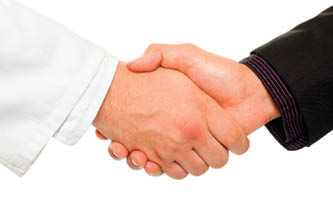 :dropcap_open:I:dropcap_close:t wasn’t until 1983 that the American Medical Association changed is stance on affiliation with chiropractors as being unethical.  That is not too long ago and it seems that, in some circles, the medical community is coming around faster than the chiropractic community; chiropractors are good at holding grudges.  The truth is, it is not about chiropractic, physical therapy or medicine, it is about patients.  The research is building on the benefits of chiropractic care and many (not all) of our educational institutions are contributing to the literature.  It is time that you stop confusing the politics of medicine with community medical providers; they are generally not the same.   Many of the local MDs that I work with on a daily basis and the ones I learn about while consulting across the country are open to learning about chiropractic.  That openness includes genuine interest in a drug-free and non-surgical option for their patients as well as simply loving chiropractors because we refer patients!  In the end, it doesn’t matter because we are trained to care for patients, and the more we can do that, the better.

I am not talking about assimilating into the medical model, running a MD/DC practice or being afraid to talk Subluxation to medical providers.  I know for a fact that you can have the referrals and stay genuine to the chiropractic model, which is why the MD sends referrals to me and not the physiatrist or PT. The beauty is in chiropractic being a separate and distinct profession doing what no other health profession does.  MDs will listen to and understand the chiropractic model, as long as it is not given to them as though they were a patient.  There is a HUGE difference between a patient report of findings and an MD report of findings.  The major tenets of chiropractic are why we are the third largest healing profession in the United States, and we need to be better at explaining it instead of running away from it.  After all, it has gotten us this far hasn’t it?
The chiropractic Achilles heel is our self doubt when it comes to communicating effectively with medical professionals around our practices. For 116 years doctors of chiropractic have been the very best at educating our patients.  We have stellar reputations and enjoy the highest patient satisfaction rate of any healthcare profession. What we are lacking is translating that ability in teaching to the medical community.  The trick is to understand how to communicate in the fast-paced healthcare environment with the same effort and effectiveness we have at spinal screenings and patient education seminars.  The number one way to communicate effectively is through reporting. In my private practice, I have learned a lot about orofacial pain management, orthopedic and neurological surgery, trigger point, epidural and facet joint injections as well as how a rheumatologist or neuropsychologist evaluates a patient.  I learned over time which doctors were thorough and which ones cut corners.  I looked at which ones provide information as part of a team and include chiropractic and which ones don’t.  How was all this possible?  I read their reports!  Medical doctors are trained to create and read reports. That is how they communicate and it allows them to be instantly updated.
Currently the chiropractic profession is severely deficient in modern reporting techniques and this is hurting our ability to break out of the 7% utilization rate.  After 116 years we continue to treat less than 10% of the population. Why?   The reason is we have not been able to build advocates through reporting. Our reports are filled with technical chiropractic jargon, which would be great if chiropractors referred to each other, but we don’t.  We need to focus on reporting the patient’s condition in a manner that builds confidence in our clinical abilities and the assessments of our patients.  We need to be out in the community giving MDs reports of findings and building advocates all around us.  It is only then that we will see the other 93% of the population.
Dr. Owens has established the nation’s first chiropractic elective in a Family Residency Program with the SUNY at Buffalo School of Medicine and Biomedical Sciences.  He has developed and credentials chiropractors to teach courses approved for CME credit to the medical community.   He can be reached at 716-228-3847.