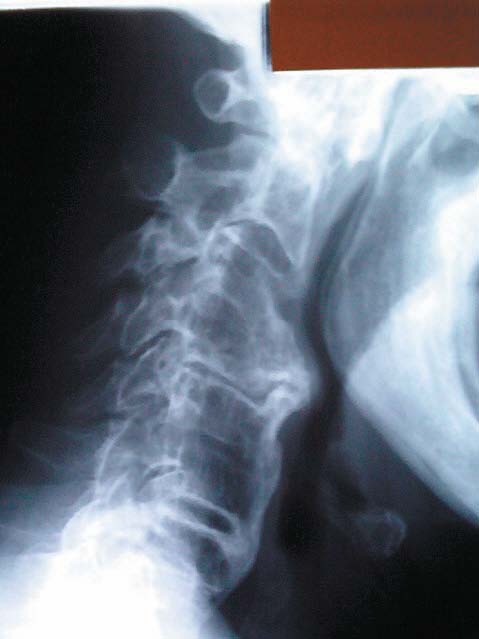 RA is considered the most common inflammatory arthritide.1 It is a systemic connective tissue disorder that primarily affects the synovial lined joints.1 It is characterized by an inflammatory, hyperplastic synovitis (pannus formation), which causes cartilage and bone destruction ultimately leading to loss of joint function.1 It typically affects the small joints of the body, i.e., hands, wrists, elbows, shoulders, feet, knees and hips.1,5 It is usually seen bilaterally and affects the joints symmetrically.1,5 The onset of RA is generally between the ages of twenty and fifty and affects women more often than men.1,5 When RA is seen in older individuals above sixty years of age, the ratio of occurrence between men and women becomes almost equal.1 Generally speaking, rheumatoid arthritis rarely affects the axial skeleton, but when it does, the cervical spine is the most common region of involvement, resulting in anterior translation (movement) of the atlantoaxial complex 9.5 percent to 36 percent of the time.1 This forward translation is most often caused from erosion of the odontoid process or transverse ligament laxity from pannus formation.1 Laboratory tests such as the rheumatoid factor (RF) assist in confirming a diagnosis. A positive rheumatoid factor is usually seen in 70 to 80 percent of the patients with rheumatoid arthritis.1 Other laboratory tests such as a complete blood count (CBC), erythrocyte sedimentation rate (ESR) and anti-nuclearantibodies (ANA) assay may help to confirm and evaluate patients with rheumatoid arthritis.1

DISH is classified as a rheumatological abnormality characterized by marked proliferation of bone where the ligamentous and tendinous attachments to bony sites are found.1 DISH can affect the spine or extraspinal areas, but tends to develop most commonly in the anterior longitudinal ligament (ALL) of the spine.1 It tends to affect males more than females and is usually seen in patients over the age of fifty.5 The typical radiographic findings are characterized by large flowing ossifications, sometimes referred to as candle wax drippings, located along the anterolateral aspect of the vertebral bodies of at least four contiguous vertebrae, with relative preservation of the disc heights and absence of facet ankylosing and sacroiliac erosion/fusion.1,5 It should be noted, as a result of the large flowing ossification about the anterolateral aspect of the vertebral bodies, secondary complications of dysphagia can arise in approximately 20 percent of the patients, causing displacement of the pharyngeal air shadow.5 In addition, there is a higher incident of patients diagnosed with DISH having associated diabetes mellitus, approximately 13-49 percent of the time.1 Laboratory tests are generally unremarkable; however, patients with DISH tend to show hyperinsulinemia following glucose challenge tests.1,5 Evaluation of the HLA B8 antigen may be positive in approximately 40 percent of the patients with DISH.5

The radiographs being depicted are those of an eighty-nine-year-old male patient who consulted me because of pain, stiffness, spasm and restricted range of motion in his cervical and cervicothoracic spine.

The patient’s X-rays revealed an increase in the atlantodental interspace (ADI), which normally should measure no greater than 3mm in an adult and 5mm in a child.1,5 Also noted is the presence of forward displacement of the posterior cervical line, prominent flowing bone spurs (candle wax drippings) and fusion of several vertebral segments along the anterior longitudinal ligament. The articular facets and many of the disc spaces of this patient’s cervical spine are still preserved. Reference X-rays for these abnormal findings.

Treatment for RA/DISH should be directed toward obtaining meaningful symptomatic improvement, because there is no known cure for these two disorders.2 Patients afflicted with RA and/or DISH require that treatment goals be directed toward relieving pain, spasm, inflammation and trying to slow down or stop joint damage, as well as improve the patient’s sense of well-being and his ability to function.2,4 Medical physicians usually prescribe medication to help control these symptoms.2,4 Physical therapy, along with mild non-strenuous movements and exercises, may also help stabilize and strengthen joints and muscles to help to increase articular range of motion.2,4 Goals should also include emphasizing that patients obtain adequate rest and exercise.2,4 The X-rays depicted in this case revealed significant osseous changes resulting from DISH, along with anterior displacement of C1 from RA, which precluded any osseous manipulation or adjustments from being administered to this patient’s cervical spine. However, in carefully selected patients without significant upper cervical pathology, where there is no concern for injury to the spinal cord or other neurological elements, gentle and measured manipulation may be an option the chiropractic physician would want to consider.

Physiotherapy modalities, such as electro-muscle stimulation, ultrasound, hydrocollator therapy, soft tissue manipulation, trigger point therapy and light stretching, may be of help in reducing the patient’s symptomatology. It is prudent to remember, treatment should always be designed to fit the patient’s needs rather than the patient being required to fit the therapy.

All or some of the above procedures, depending upon the stage of the patient’s RA/DISH, may be of clinical benefit in ameliorating the patient’s active symptoms, which is a result of these two disorders. Stress reduction techniques can be helpful in assisting the patient in dealing with the emotional and physical challenges patients experience with these disorders.4

In some cases, where severe joint damage has occurred, surgery may be required to reduce pain and improve joint function, which may also help improve the patient’s ability to perform his normal activities of daily living. The procedures to accomplish this may include joint replacement, tendon reconstruction and synovectomy.4 In rare cases involving DISH, where ossification of the anterior longitudinal ligament (ALL) becomes so significantly calcified wherein it causes the patient difficulty with swallowing, the patient may need to undergo surgery in order to remove the bony spurs.2 In any event, the patient’s age, health status and stage of his disease would determine the most appropriate course of treatment.

Dr. Paul Sherman practiced in New Jersey for sixteen years. Presently, he is an assistant professor of clinical sciences and a post-graduate faculty instructor at the University of Bridgeport College of Chiropractic, Bridgeport, Connecticut. He is also an instructor and writer for Chirocredit.com, a chiropractic continuing education website. He can be reached at [email protected]