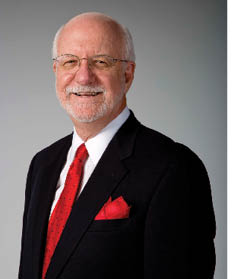 “Why did you develop an instrument to give a chiropractic adjustment?”
:dropcap_open:D:dropcap_close:r. Arlan Fuhr has been asked that question frequently in the 45 years since the Activator Method was first in development. The answer is simple: his body hurt too much.

Dr. Fuhr was three years into his practice, and had been adjusting a high volume of patients using a thumb thrust generated by bringing the elbows together with quick force. But after long days of using his thumb to make contact, and snapping his elbows together, the wear and tear was taking its toll. In the morning, he would soak his elbows in hot water to loosen up the joint ligaments, and at night he would ice them by kneeling in front of the sink.
Says Dr. Fuhr, “My dog was my sole sympathizer. He would sit and watch me faithfully as I completed this daily ritual.”
Then, on one of those painful evenings, Dr. Fuhr said, “No more.”  He decided there had to be a better way to administer the light force speed adjustment that had become central to his practice.
Dr. Fuhr approached his partner and the two set out to find an object or instrument that could provide the same speedy thrust at the end of the day as it did at the beginning.
His first real success came quite by accident.
“I was treating a local dentist and told him about my quest to find something to replace the thrust I was giving with my thumbs and elbows,” remembers Dr. Fuhr.  “After his adjustment, he turned to me and said, ‘We may have just what you are looking for.’”
The dentist described a surgical mallet that was used to split wisdom teeth and recommended that Dr. Fuhr take the scalpel out of the shank of the mallet and replace it with something blunt.  He said he didn’t use his very often, so he would bring it to Dr. Fuhr the next time he came for an adjustment.
By replacing the scalpel with a brake shoe rivet and using a rubber tip from a doorstop, the first modern-day chiropractic adjusting instrument was born.  It wasn’t perfect; the surgical mallet, while effective for short periods of time, was not engineered to sustain the volumes of patients Dr. Fuhr was treating.  It was clear that an instrument designed specifically for chiropractors, one that could withstand at least 1,000 thrusts a day, was needed.  But it was an important first step.  Even now – several generations of Activator Adjusting Instruments later – the momentum of that original development process, and, more importantly, the effort to continuously improve, goes on.
The first Activator Adjusting Instrument received a federal patent in 1976, and this instrument has been used as the predicate device for all future FDA registrations. Earning this patent was considered a pioneering event in chiropractic, providing the basis for the development of later generations of adjusting instruments.
Another influential point in the history of the Activator was the initiation of research to support its efficacy. To start, Dr. Fuhr had no formal research to underline the Activator’s effectiveness, other than clinical experience using the instrument. In the mid-80s, he hired a PhD to evaluate what the instrument actually accomplished. In those days, members of the academic community were reluctant to get involved with chiropractic, but a renegade from UCLA, who had been exiled for challenging his department head, was attracted to the unique opportunity.
As it turned out, although this PhD was naturally bright and a hands-on researcher, his background in immunology didn’t align with what Dr. Fuhr and his team were trying to accomplish. Being a good-natured scholar, he did the best he could but was quick to admit that he was not the best fit.  Not willing to derail the project, Dr. Fuhr identified a biomechanical engineer to help with the analysis.

“That engineer taught me a valuable research lesson: You cannot force an academic to do anything he or she is not naturally interested in to begin with,” Dr. Fuhr remarks. “Fortunately, the engineer was quite compelled by what we had created, and went
on to lead a decade’s worth of research on resonance frequency, specifically how to align the frequency produced by the instrument with the natural frequency of the body.”
In 1994, Dr. Fuhr patented another instrument that had a special weight on the tip that caused it to resonate more closely with the natural frequency of the body. He began to learn about the neurophysiology of the body, and the more he discovered, the more he realized that additional research was needed.
“I really appreciated that, through our research, we were getting tangible answers about how far we moved a bone and what physiological effect the instrument thrust had on the body,” says Dr. Fuhr.
The next improvement to the instrument came when an engineer and Dr. Fuhr noticed some clinicians pushing the instrument too hard into the patient, which, in turn, dampened the instrument’s thrust into the patient. Dr. Fuhr and the engineer developed a pre-load frame on the instrument that made it impossible to place an improper thrust into a patient. This same pre-load assured that each thrust was the same, regardless of the practitioner using the instrument.
Dr. Fuhr likens this reproducibility to companies like Starbucks and McDonald’s. “You can travel to virtually any country and order a cup of coffee or a cheeseburger that will look, taste and smell virtually the same as the one you order at home,” comments Dr. Fuhr. “Of all my accomplishments, my proudest is the fact that any patient receiving an Activator adjustment will receive the same thrust, time after time, in every city in the world.” Because Dr. Fuhr’s instrument development efforts ran parallel with his research, his team commenced investigating instrument adjusting compared to Diversified adjusting. He chose Diversified because of its widespread use and the fact that it was the most heavily researched technique at the time.
“Our research yielded impressive findings, and we have numerous peer-reviewed papers that demonstrate equivalency between the two techniques,” says Dr. Fuhr. “Another interesting trend emerged from our research activities – the appearance of multi-site testing. Projects have ranged from evaluating techniques to relieve low back and neck pain to temporomandibular joint disease.”
In 1986, the National Institutes of Health awarded Dr. Fuhr their Small Business Innovative Research Grant, the first funding ever given by NIH to chiropractic. That was followed by the founding of the National Institute of Chiropractic Research, where for 15 years he helped raise $600,000 for preliminary research on instrument adjusting.
“To demonstrate our progress,” comments Dr. Fuhr, “nearly that much was granted to the profession in last year alone to fund research in instrument adjusting.”
Throughout these decades of research and development, Dr. Fuhr came to understand why his dear friend Dr. Joe Keating was always annoyed by the saying “Chiropractic works.”
“For years, we believed we didn’t need supporting research because we just knew that chiropractic was effective,” opines Dr. Fuhr.
:quoteright_open:This same pre-load assured that each thrust was the same, regardless of the practitioner using the instrument.:quoteright_close:
Clinicians hung their hats on that statement, but academics and others in healthcare wanted proof of concept. Even today’s students require credible evidence that something works, and they are asking important questions like, “What technique works best for what condition?” Dr. Fuhr was so impassioned by what he discovered through those first clinical trials that he committed to establishing a research base for the Activator Method and the Activator Adjusting Instrument throughout his career. Today, more than 100 peer-reviewed papers have been published on instrument adjusting and specifically the Activator Method and associated adjusting instruments. This head-start on research is what has allowed instrument adjusting to become integrated into the curriculum in chiropractic colleges and has given Activator its position as the world’s most used instrument adjusting technique. It has also differentiated the Activator Adjusting Instrument in all its iterations as the only instrument on the market supported by clinical trials.
Dr. Fuhr admits the journey has been rocky at times, rewarding at others. “The most important thing is that chiropractic has staked its claim in the spine care world, and I believe the research and development of the Activator has played an influential role in establishing that position.”
At a recent dinner, a colleague told Dr. Fuhr that the general scientific community and especially the medical community is becoming publicly interested in manipulation.
Says Dr. Fuhr, “My dream has always been to have a substantive body of research to support instrument adjusting, empowering spinal manipulation to become the treatment of choice, and to create the perfect instrument to deliver that manipulation. All my dreams are coming true.”
Contact Dr. Arlan Fuhr at 1-800-598-0224 or visit his website www.activator.com