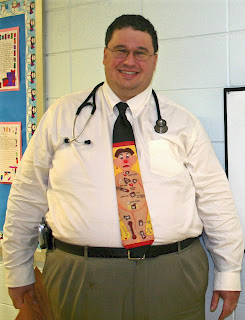 :dropcap_open:I:dropcap_close:t seems that today’s doctors, from all specialties, are doing a poorer job of representation when it comes to health and well-being. You see it everywhere now – doctors that are obese themselves are consulting with patients on how to lose weight. Some doctors even smoke, yet will have patients dying of lung cancer that they deliver care for. The problem is not at all limited to chiropractic physicians. Ask yourself this: Would you trust a doctor who doesn’t him or herself display the image of health? Would you be more likely to trust a doctor who does?

It is human nature for one to have more confidence in a dental practice where the dentist has flawless teeth, or in a salon where the hairstylist has a chic hair-do. The same is true of doctors who maintain a healthy weight, which may help explain why those who are overweight are less likely to raise the topic of weight loss to their patients.
In a study consisting of five hundred primary care physicians around the United States, researchers at the Johns Hopkins Bloomberg School of Public Health and the Johns Hopkins University School of Medicine found that a doctor’s own body weight influenced how he or she cared for patients with weight problems. Overweight or obese doctors were less likely to discuss weight loss with overweight patients: only 18% of the overweight physicians discussed losing weight with their patients, while 30% of healthy-weight physicians did.
Additionally, the researchers found that 93% of the doctors were diagnosing obesity in their patients only if they believed their own weight was equal to or less than the weight of their patients; only 7% of the physicians who believed their weight exceeded that of their patients actually diagnosed obesity.
In the study, when overweight or obese doctors did address obesity, they were more likely than the healthy-weight physicians to prescribe anti-obesity medications (26% vs. 18%), as opposed to recommending healthy lifestyle changes such as diet and exercise. This finding likely reflects a lack of confidence in these approaches to weight loss, either due to the physician’s own personal experiences or as a consequence of their subconscious concern that such advice would be viewed as less reliable to patients coming from someone who wasn’t of a healthier weight.
Compared with overweight doctors, the physicians of normal body weight were more confident in their ability to offer advice on diet and exercise to their heavier patients, and 72% believed that they should be models of healthy weight for their patients. Only 56% of the overweight or obese doctors believed that their own weight was viewed as a reflection of any kind for their patients.
These results represent one of several other challenges in the war against obesity – doctors are notoriously bad at taking care of themselves and consequently many are poor role models for their patients – but the study also signals an opportunity for significant improvement in weight management with patients. “If we improve physician well-being, and improve their lifestyles toward weight loss or weight maintenance, that can go a long way toward influencing the care they provide their patients,” says Sara Bleich, an assistant professor of health policy at Johns Hopkins Bloomberg School of Public Health.
Doctors who successfully lose weight, eat well, and exercise regularly may be more likely to share their own personal experiences with patients, increasing the likelihood that their patients will then follow their advice. With healthier physicians, we could help pave the path for the general population to live more healthfully.
Dr. Corey Mote is a chiropractic physician, professional natural bodybuilder, exercise physiologist, columnist for various fitness magazines nationally and internationally, regular contributor to various healthcare profession magazines and journals, as well as a consultant for a United Kingdom-based vocational fitness program known as U-Phorm. For more information on Dr. Mote, visit his site at www.CoreyMote.com, or email him at [email protected]