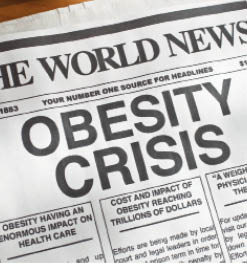 The Greatest Healthcare/Financial Crisis
:dropcap_open:M:dropcap_close:etabolic Syndrome (aka Syndrome X) with its four hallmark symptoms of obesity, hypertension, dyslipidemia and hyperglycemia is devastating our country as well as the whole of North America.  In March of 2005 the National Institutes of Health and the New England Journal of Medicine published a paper stating that because of this epidemic the current generation is projected to have a shorter life expectancy then the previous one…for the first time in recorded history!  Since that paper things have become much worse.  Worse, despite the fact we have changed the USDA “Food Pyramid”, developed many new classes of pharmaceutical agents (especially ones for pre-diabetes and diabetes Type II), have taken soda machines out of schools, and even the First Lady’s top priority is the obesity epidemic.  This syndrome, with all of its comorbidities (cardiovascular disease, stroke, many cancers, kidney failure, blindness, amputations, etc.), accounts for the majority of healthcare dollars spent.  If the tide is not turned, Metabolic Syndrome will bankrupt our country. This is a fact.

For more information, all of the in-depth science and an opportunity to speak with one of your fellow practitioners, please contact Ideal Protein @ 1-866-314-4447