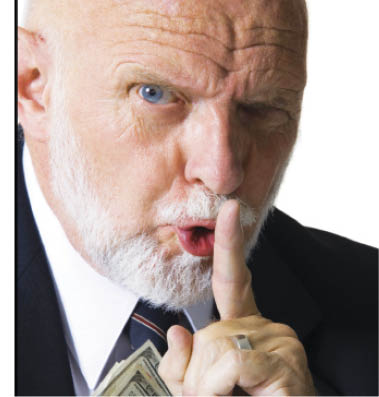 :dropcap_open:P:dropcap_close:aperwork.  Dr. Mark Franks, D.C. was appalled by the number of his patients who had been placed on blood pressure medications by their allopathic physicians when such intervention was clearly not indicated. They had been persuaded because they were told their blood pressure readings were “high.” Dr. Franks knew that fifteen years ago hypertension was a repeatable blood pressure reading of greater than 150/90. “Normal” blood pressure was anything under 140/90.

Today, this reading is considered Stage 1 of high blood pressure. Anything over 120/80 is now considered pre-hypertension. Based on these numbers about 65 million or one out of three adults have high blood pressure while another 59 million have pre-hypertension. The arbitrary assignment of what constitutes high blood pressure by the AMA and their pharmaceutical cohorts has allowed otherwise normal healthy people to be coerced into taking drugs they do not need and, in fact, are dangerous!
The rationale for doing this is simple. It provides the drug industry an entirely new market to tap and expand into by convincing basically healthy individuals they are headed for a crisis unless they take the industry’s magic pills.
Welcome to the Blood Pressure Conspiracy! In 2010, sales of blood pressure drugs alone reached $63 billion a year. (By comparison, the entire U.S. dietary supplement market achieved $5.2 billion in sales.) Of course $63 billion a year is merely the tip of the iceberg. Blood pressure meds, like most drugs, have side effects. This requires the victim, uh, patient, to take more drugs to counter these side effects. And off we go to Drug World!
Of course, what the drug industry and the medical profession are not telling the public is high blood pressure is a lifestyle ailment which can be effectively treated and readily correctible with simple lifestyle changes, diet, and nutritional therapy. Furthermore, many individuals are susceptible to the “white coat syndrome,” where merely being in a clinical setting is sufficient to cause hypertension. Neither of these occurrences warrants the inclusion of dangerous and unnecessary drugs. Unfortunately, if those of us in the holistic health and alternative medicine fields don’t make our patients and the public aware of these facts, we have only ourselves to blame. The first individuals we need to educate, however, are ourselves.
Dr. Franks, like most holistic practitioners, understood that artificial drugs are poisons that negatively impact the body. But even he was amazed at the extent of the deception being perpetrated on the public under the guise of “curing disease and improving health.” Here is a typical textbook case of what happens once the drug industry gets its hands on you!
The Blood Pressure Conspiracy in Action!
Ms. Erma Dupe was a healthy woman in her early 60s whose claim to fame was she took no prescription drugs whatsoever. Statically over 85% of women in her age group take prescription drugs, making Erma a rarity among her peer group. The medical community and drug industry were not making any money off Ms. Dupe! Unfortunately, this happy state of affairs was too good to last.
Ms. Dupe’s allopathic physician prescribed her a beta-blocker drug after two routine blood pressure checks in his office revealed readings of 140/85 and 130/80 respectively. Perfectly normal readings had they been taken 15 years ago. Erma indicated the BP readings she had taken with her home monitor were never over 122/80, but this assertion was dismissed as “faulty input from cheap drugstore BP meters.” (In fact, Consumer Reports found that most personal BP monitors are excellent and cost under $50).
Beta-blockers are beta-adrenergic blocking agents that prevent increases in heart rate and muscular contractions that raise blood pressure. They also reduce the oxygen requirements of the heart. Wait a minute! Doesn’t the heart pump enriched blood from the lungs and send it through the body?
The black box warning states, “Continued depression of the myocardium with beta-blocking agents over a period of time can lead to cardiac failure.” Wait a minute! Isn’t the purpose behind taking blood pressure medication to reduce your chance of having a heart attack? Other side effects of beta-blockers include feeling light headed, fainting, nausea and depression. These side effects make perfect sense considering this drug slows the heart rate and reduces oxygen!
The beta-blocker failed to reduce Ms. Dupe’s blood pressure but did leave her feeling listless and depressed. Her physician then prescribed a diuretic since this drug can be used concomitantly with her beta-blocker. A diuretic reduces water and salt through the urine. Side effects include increased cholesterol levels, increased blood sugar, weakness, dizziness, impotence, and dehydration.
Ms. Dupe’s blood pressure came down slightly but her lethargy and weakness reduced her mobility and she began gaining weight. Her cholesterol level also increased dramatically, which frequently happens when beta blockers and diuretics are combined.
Ms. Dupe’s physician switched her to a calcium-channel blocker which does not raise cholesterol. Channel blocker’s work by decreasing the force of contraction of the heart muscle, which lowers blood pressure. Ca-ching! Calcium blockers ranked eighth in total U.S. drug sales at $4.6 billion a year, despite studies showing their long-term use leads to about 40,000 “unnecessary or excess” heart attacks a year with no demonstrated clinical benefit. (The “benefit” of this class of blood pressure drug accrues to the drug pushers that manufacture it!)
Side effects include gastrointestinal hemorrhage, cancer, and heart attack. Wait a minute! Isn’t the purpose behind taking blood pressure medication to reduce your chance of having a heart attack? And what’s this about causing cancer?
In an effort to reduce Ms. Dupe’s excessive cholesterol, promulgated by the beta-blocker and diuretic she had been taking, her physician prescribed the cholesterol lowering drug Lipitor. This statin drug reduces the production of cholesterol by the liver. Ca-ching! Lipitor was the Number one best selling drug in the U.S. in 2010 with sales of $7.2 billion. Common side effects include headache, nausea, constipation, weakness, muscle pain, and congestive heart failure with prolonged use. Wait a minute! Isn’t reducing the chance of heart failure the purpose behind lowering cholesterol?
In the months to follow her physician prescribed Cymbalta, a drug to treat gene-ral anxiety disorder and fibromyalgia. Ca-ching!  Yearly sales of $3.2 billion with a 166% five year growth record. This was followed by a prescription pain reliever. By the time poor Erma Dupe came to Dr. Franks for help she was on five prescription drugs and feeling tired, miserable, confused and frightened. Final score – drug pushers 5; Erma 0.
Weaning Patients off Drugs and Restoring Good Health!

Patient Drug Survey: Dr. Frank’s first order of business was to request Erma bring in every prescription and OTC drug she was taking, especially her blood pressure meds. He classified each drug as to (1) its purpose; (2) mode of action; (3) dosage; and (4) side effects. He could now determine which of Erma’s complaints were health-related and which were the results of drug side effects.
Educating the Patient: Once Dr. Franks understood how Erma’s drugs were negatively impacting her health he was able to intelligently convey this information to her so she could make an informed decision. The drug industry spends millions $$ a year convincing people that high blood pressure means drug treatment for life, despite numerous clinical studies that show herbs to be equally effective, safer, and much more cost-effective than pharmaceutical drugs.
Many holistic practitioners are reluctant, however, to advise their patients of these facts because they fear countermanding the advice of the allopathic physician. As a result, their patients continue to ingest artificial poisons and suffer needlessly.
Dr. Franks was careful not to contravene her physician’s advice nor contradict his choice of medications. He knew from experience when given the proper advice for achieving good health the patient would make their own obvious choices as to drugs or natural alternatives. Most of his patients hated drugs but felt there was no other viable choices. Dr. Franks could now offer them choices.
Understanding Natural Alternatives:
Dr. Franks’ research into drug alternatives to blood pressure medications enabled him to seek out natural formulas and ways that allowed Erma, as well as his other patients, to lower and maintain her blood pressure without drugs or their dangerous health side effects. For example:
Understanding the Risk Factors of High Blood Pressure
Dr. Franks understood that while drugs forced the cardiovascular system to artificially lower blood pressure they did nothing to address the underlying symptoms that caused the problem. The patient was therefore caught up in an endless round of drugs and side effects that eventually deteriorates health. He also knew chronic high blood pressure is usually (95%) the result of arteriosclerosis or narrowed arteries plugged with fatty deposits linked to lifestyle issues. These issues included dehydration, excess salt, poor eating habits, excess weight, high stress, and lack of physical activity (exercise). By assisting his patients to eliminate or reduce these risk factors Dr. Franks helped them to break free of the pharmaceutical industries blood pressure conspiracy.
Many individuals can lower their blood pressure simply by drinking 8 to 10 glasses of water a day. Dehydration raises blood pressure while water relaxes the arteries and flushes salt out of the system.
Eat a diet rich in fiber, fresh vegetables, fruits, lean meats, and whole grains while reducing red meats and refined products.
Avoid soft drinks, fried foods, and simple carbohydrate offerings and go on a weight reduction program if necessary. For every 20 pounds of weight loss there is a 5 to 20 point drop in systolic blood pressure.
Reduce stress, which has been directly linked to atherosclerosis, heart disease, and high blood pressure. Consider natural calmatives such as valerian root, passiflora, or scullicap. Avoid prescription anti-depressants and sedatives.
Exercise 3 times a week or consider mild aerobic exercise such as walking 30 minutes a day, which can reduce systolic blood pressure by 9 points.
Consider a formulation of balanced natural blood pressure supplements which, when taken on a consistent basis, can regulate blood pressure with no dangerous side effects.
By providing his patients the information they needed on natural products and educating them on the side effects of the drugs they were taking, Dr. Franks helped them break free of the pharmaceutical industries blood pressure conspiracy. Incidentally, Erma is now healthy and drug free again!

Galen O. Ballard is President of Titan Laboratories and directly responsible for the products division. His background includes undergraduate studies in research at the University of Denver with graduate work at the Universities of Wisconsin and Maryland. Galen may be reached toll free at 1-800-929-0945 or by email at [email protected]