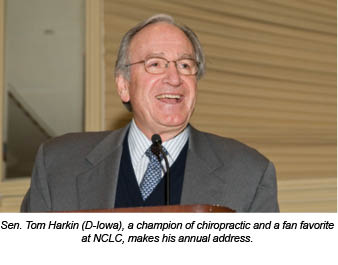 :dropcap_open:P:dropcap_close:icture it: Washington, D.C., 2012. While much debate next year will focus on the upcoming presidential election, health care reform will continue to be a hot topic. As with the election, many questions about the implementation of the Patient Protection and Affordable Care Act (PPACA) hang heavy over the nation’s capital—and the chiropractic profession. Questions about the essential benefits package, filling gaps in our country’s primary care workforce and the establishment of health insurance exchanges on the state level are contentious and divisive across the country and inside the Beltway.

There will be no lack of opportunities to mingle with colleagues—and elected representatives—during NCLC. The congressional reception will be held on Wednesday, Feb. 15 on Capitol Hill in the Cannon Caucus Room. Previous congressional representatives in attendance include: Rep. Howard Coble (R-N.C.), Rep. Walter Jones (R-N.C.) and Sen. Tom Harkin (D-Iowa). On Thursday, Feb. 16 there will be a dinner and comedy show featuring the Capitol Steps for attendees and guests. Finally, on Feb. 18-19, ACA’s specialty councils will present “The Ultimate Head, Shoulder & Neck Symposium.”
Featured sessions and speakers:
NCLC is the chiropractic profession’s opportunity to tell its story to congressional representatives and to make them aware of how efficiently and cost-effectively DCs help their patients. Now more than ever, Congress needs to hear the profession’s message—and they need to hear it directly from doctors of chiropractic in their districts and states. Too many people in this country are sick and too many people can’t access the health care they need. It’s time to make sure Congress knows that the chiropractic profession has some of the answers that our health care system is looking for.
The Chiropractic Summit and its 41 member organizations, including the ACA, ACC, COCSA, and ICA encourage members and affiliates of each organization to join in the lobbying effort at this critical time in chiropractic and healthcare history.   To learn more about the Chiropractic Summit, visit www.chirosummit.org. To learn more about attending this years NCLC conference in Washington D.C., (703) 276-8800 or go to www.acatoday.org.