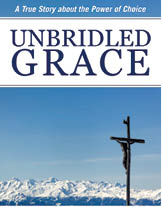 Unbridled Grace, a recently released new title by Dallas chiropractor Michael Norman is making a dramatic entrance into the Christian book market.  Dr. Norman unabashedly tells of his riveting true story of an almost inconceivable nightmare endured by him and his family.  Readers are enjoying a truly amazing story of redemption and triumph while also learning of the strength and integrity of the chiropractic profession in the face of continuing prejudice and oppression.
Unbridled Grace begins with Dr. Norman’s graduation from chiropractic school and start of his new career, as well as life as a new husband and father.  After innocently accepting a part-time chiropractic position, he soon found himself entangled in a web of evil as his employers were later found to be members of the Russian Mafia.
Despite his cooperation in a federal investigation, the government cruelly turned against him.  Dr. Norman endured a federal indictment and early morning raid upon his home where he was arrested at gunpoint by FBI agents in front of his five-year-old daughter.  He’s soon left with two dreadful choices:  plead guilty to crimes he didn’t commit, receive probation and avoid prison time; or fight this injustice and risk going to prison for at least ten years.  It is at this time that a series of miraculous occurrences begin and readers are shown what courage, truth and the trust to step out in faith can bring to all of our lives when all else appears hopeless.
Unbridled Grace is Dr. Norman’s first book and has received praise as a highly recommended and engaging read for anyone enduring any kind of threatening trial.  His goal for sharing his riveting true story with readers was to lift their faith and encourage all of us to face the challenges of life and practice with a new found boldness.  However, one theme stands out as strikingly apparent particularly in relation to chiropractic.  When any chiropractor stands up and takes a principled stand for our profession, we all end up winning.
Dr. Michael J. Norman has been in private practice in Carrollton, Texas for over 19 years.  His book, Unbridled Grace: A True Story about the Power of Choice is currently available through wide distribution  and can be ordered through UnbridledGrace.com, Amazon.com, Barnes & Noble as well as other bookstores.