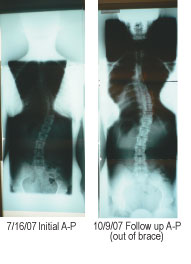 Diagnosed with Adolescent Idiopathic Scoliosis and treated using the Boston Brace at age five and a half. Brace treatment lasted five years. No treatment had been provided for multiple years prior to initial visit.

Patient Female A was accompanied by her mother at the time of her initial office visit. She complained of chronic stomach upset, back tightness in the right scapula region ranging, from 1 to 10, depending upon the day, and reported walking as the only aggravating factor. Additional symptoms included constipation, diarrhea, dizziness, fatigue, headaches, leg pain and exercise induced asthma. The patient also chose the following conditions from a check list: head pain, shoulder pain, stomach pain, hip and jaw pain, lung problems, poor appetite, constipation, allergies, menstrual cramping.

Observations included a severe postural deformity with significant rib humping on the right, anterior shoulder rotation on the right and thoracic subluxation patterns causing right truncal translation in relation to the pelvis, as well as a right hypertropia with left head tilt.

Today Female Patient A awoke with dizziness and vomited prior to leaving her home. She described the feeling as spinning in her head, and tiredness. She denied ringing in the ear and indicated positional changes reduce her dizziness.

Myotatic stretch responses were 2 + brisk. Motor exam was unremarkable aside from a significant tightness of the right hamstring. Cardinal signs of gaze were within normal limits, as was an otoscopic and opthalmoscopic examination. No clonus or rigidity was noted.

A test of vestibulospinal function (Fukada Step test) revealed significant (15 degrees) right rotation. The patient was asked to close her eyes and march in place for thirty seconds.

Patient Female A was evaluated using video infrared Electronystagmography. A clinically significant right beating nystagmus was observed during vision denial positional testing. This is consistent with a vestibular dysfunction. A right beating end gaze nystagmus was also noted on attempted eccentric gaze holding to an imaginary target during vision then vision denial, a finding consistent with brainstem involvement. A battery of caloric testing was performed to identify if these vestibular findings were of peripheral or central origin. The findings indicated normal function of the peripheral receptor, therefore indicating a central vestibular involvement in the patients’ scoliosis.

A rehabilitation protocol was constructed to include vestibular, respiratory, and neuromuscular therapies. The Spinecor Brace was utilized as first reported by Dr. Christine Collaird, M.D. The brace was worn daily for twenty hours. The patient was trained in office and expected to perform the regiment daily for six weeks. Using the Spinecor Physiotherapy protocols, Patient Female A was taught a series of corrective movements designed to reduce her postural deformity. She performed these movements in conjunction with diaphragmatic breathing in both seated and standing postures. In her particular case, thoracic (+y) rotation was coupled with (x axis) translation. The shoulder girdle was also rotated and tilted (-y, +z). (FIGURE 1)

Female Patient A was also receiving intensive sessions of Myofascial release which included limb pulling. Vestibular habituation was taught and prescribed. (FIGURE 3) Sessions were to be performed three times daily for two weeks, followed by a two-week hiatus to allow for compensation to occur. Ocular tracking and gaze stabilization training was also prescribed, and taught to be performed in the corrective posture.

A standing A-P radiograph was exposed with Patient Female A in a standardized footplate to reduce postural error. Breast and gonadal shield were utilized. A thirteen degree reduction of the thoracic curvature was measured to 49 degrees (from 62 degrees), and a three degree reduction of the lumbar curvature was measured to 18 degrees (from 21 degrees). Vestibular testing revealed no abnormal nystagmus and the patient reported cessation of dizziness and stomach complaints. This case is one which will require long term follow-up and continued care.

Dr. Marc Lamantia sees patients in offices throughout the United States including New York, Chicago, Atlanta, Phoenix, Dallas, Denver, San Francisco, Los Angeles, and Ontario, Canada. He is adjunct faculty for New York Chiropractic College as well as a PhD candidate at Leeds Metropolitan University in the United Kingdom. To contact Dr. Lamantia, call 1-800-281-5010 or visit the website at www.scoliosissystems.com.