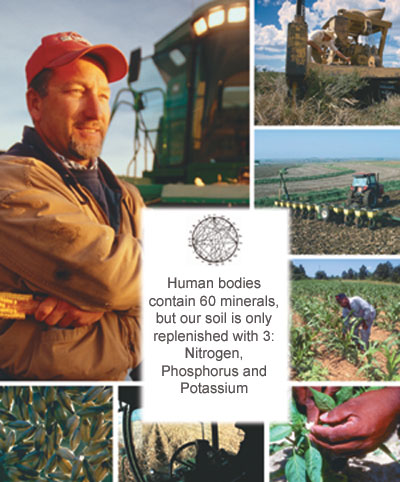 If you are recommending trace minerals to your patients, chances are you are recommending toxic substances.  The strange paradox is, many of these toxic minerals are also essential for life!  With the recent popularity of coral calcium, colloidal mineral cocktails, and other supplements containing seventy or more trace minerals, the question of how toxic elements, such as arsenic, cadmium, antimony, and vanadium, can be safe needs to be addressed.  Truth is, each of these minerals is deemed an “essential mineral” by the National Research Council (NRC)–that is, essential for human or animal life and only available to the body by ingestion of foods.

Take arsenic for example.  This well known deadly poison is also required for life (NRC, 1989).  The average human being has 20 mg of arsenic distributed throughout the body.1  Studies on rats have shown a deficiency of arsenic is associated with retarded growth,1  Similar information is available on all 25 essential minerals–each is necessary, yet they will all have severe adverse effects in large quantities. The famous Swiss physician, Paracelsus, summarized this phenomenon in the 1400’s when he said, “All substances are poisons; there is none which is not a poison.  The right dose differentiates a poison and a remedy.”  Even oxygen and water, taken in extreme amounts, can prove toxic.

But, which minerals are considered essential?  One hundred years ago, only fourteen elements were thought to be essential.  In 1950, copper, manganese, zinc and cobalt were added.  Late in the 1950’s, selenium was included.  1975 saw the inclusion of fluorine and silicon.  A few years later, boron was added.  Today, twenty-five are classified as essential!  The rest are not considered essential or ruled as non-essential.  It should be noted that sixty trace minerals are found in human milk, including aluminum, bromine, vanadium and nickel, which were previously considered unimportant, so we may eventually learn that up to sixty are essential or important minerals.

It is interesting that we know of at least twenty-five essential minerals and, yet, our soil is only replenished with the big three:  nitrogen, phosphorous and potassium (NPK).  Many trace minerals have become entirely absent in the land growing feed for their cattle, so farmers have begun supplementing their beef and dairy herds, because it makes economic sense–it is more profitable to buy trace mineral supplements and feed it to their cows than to suffer losses from trace mineral deficiency diseases.  Heifers on trace mineral programs produced 3.7 pounds per day more milk compared to non-supplemented groups, conception rates improved significantly, weaning weights in calves were higher and overall herd health improved.2

Not only cattle benefit from adding trace minerals to their diets.  A two-year study raising meat chickens using Brazilian coral minerals, as compared to birds on growth hormone, was conducted at University of Vila Velha, Brazil.  The result showed similar growth rates, but the chickens on coral were more energetic and, hence, produced a leaner, higher protein, lower fat bird.3

Think about that.  Farmers find it cost effective to buy trace minerals and add them to animals’ foods because the animals are not getting these elements from the produce of the fields.  Humans eat from those same depleted fields and, yet, many of us do not think about supplementing ourselves.  Perhaps it is time to reassess our fears of “toxic” trace minerals.  Trace minerals can be toxic in large quantities but equally damaging to health, and more prevalent, is their absence.

Even silicon, a trace mineral that is abundant in nature, can produce tremendous results far beyond the commonly known benefits for hair, nails and skin, when taken as a supplement.  Here are some of the latest studies on this unsung hero:

In addition to connective tissue and bone health, several other health benefits, such as protection of arterial tissue and defense against aluminum toxicity, derive from silicon.

It is believed that silicon bonds with aluminum in food and, in so doing, reduces gastrointestinal absorption of aluminum.  In rat studies, silicon was found to prevent the accumulation of aluminum in the brain.5  The protective role of silicon on aluminum was confirmed in a French study of elderly subjects.  High levels of aluminum in drinking water had a deleterious effect upon cognitive function when the silicon concentration level was low.  When the silicon concentration was high, exposure to aluminum appeared less likely to impair cognitive function.6
Experiments with rabbits eating a high cholesterol diet demonstrate silicon’s benefit as a defense against atherosclerosis.7

Silicon in your diet
Silicon is used by plants for structural support; hence, fiber rich foods, such as cereals, oats, wheat bran and vegetables, have high silicon concentration.  Another source of organic silicon available only through medical professionals is coral from Brazil.  On average, it contains 1320 ppm, along with seventy-two other trace minerals.  There are currently no established guidelines for silicon intake in humans, but there is evidence that supplementation is valuable. – by Mark Percival, D.C., N.D.