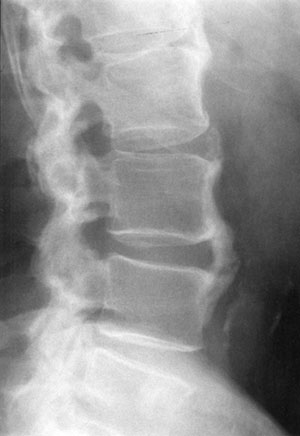 Diffuse idiopathic skeletal hyperostosis (DISH) is a generalized spinal and extraspinal articular disorder that is characterized by ligamentous calcification and ossification.  The most prominent radiographic expressions of this disease are encountered in the spine involving predominantly the anterior longitudinal ligament.  It is a distinctive disease and does not represent ankylosing spondylitis or degenerative joint disease.  An incidence of 12% of middle-aged individuals in the United States has been estimated.1

Complaints by the patient are similar to those of degenerative joint disease, involving the fifth or sixth decade of life, with morning stiffness and low-grade musculoskeletal pain, especially of the spine and its related articulations.  An additional complaint is approximately 20% of DISH patients have dysphagia due to anterior proliferative bone growths from the cervical spine.

The definitive criteria for the diagnosis of DISH are as follows:2

Statistically, the most common spinal region affected is the thoracic spine, particularly from T7 through T11.  The flowing thick hyperostosis is a classic radiological appearance.  The cervical spine is the second most common site with exuberant anterior vertebral body hyperostosis occurring from C4 through C7.  Lumbar involvement is the third most common site and most prominently in the upper three segments.  Initially, the hyperostosis begins from the middle and anterosuperior vertebral body margin, extending upward and tapering at its distal extent, simulating a candle flame.3

The most difficult differential exclusion includes ankylosing spondylitis.  The syndesmophytes of ankylosing spondylitis are fine and delicate in their appearance while in DISH the spondylophytes are very large, thick and irregular.  The lack of extensive sacroiliac joint disease is also a helpful differential point since only rarely in DISH will the SI joints show ankylosis and when this occurs it is in the upper one-third of these joints (fibrous portion) rather than the lower two-thirds (synovial portion), which is classically affected by ankylosing spondylitis. TAC