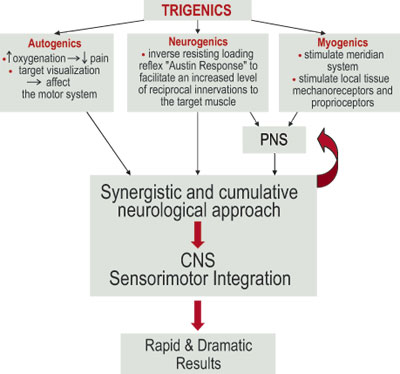 Recently there has been much publicity surrounding the claims that neck manipulation by chiropractors can cause stroke or even death via cervical artery dissection.  This type of publicity has generated much concern for chiropractic patients and the general public.  Although, after carefully addressing the patient’s concern and informing them on the risk of neck manipulation (less than 1:500,000–1 million1), some patients are still not fully calmed.  An alternative to the care of the neck can be provided using a combination of Trigenics Strengthening (TS), Trigenics Lengthening (TL), or Trigenics Manipulation (TM) procedures.2  TM is a non-force joint manipulation procedure performed while the patient initiates specific movements in a slow and controlled manner, which differs from the traditional high velocity adjustment.

Trigenics is an interactive neurologically based soft tissue assessment and manipulation treatment system that symbiotically combines aspects of both Eastern and Western principles.  An explanation and overview of Trigenics was described in the last issue of The American Chiropractor.2

On the other side of the coin, rather than focusing our energy on debating the risk of stroke from neck manipulation (which is lower than the risk of NSAID’s causing more than an estimated 16,500 deaths annually3), we should put our resources into focusing on how stroke patients can benefit from chiropractic.  The chiropractic neurology diplomate program has taught many chiropractors to diagnose and treat neurological conditions chiropractically around the world.  Trigenics has also clinically displayed positive results for patients with neurologically impaired conditions, such as cerebral palsy4 and multiple sclerosis.  This is probably because it is a neurologically based system of muscle and joint manipulation that incorporates multiple cumulative neurological mechanisms.2

The following is a case report of treatment of a stroke patient.

A 90-year-old stroke patient was recently presented to me by her daughter, who is a chiropractor, at a Trigenics seminar I was teaching in Los Angeles.  She had had a stroke on her left side and she was hemiparetic on the right side with an inability to lift her right arm above horizontal.  She was also wearing a plantar lift for her right foot, which she was unable to dorsiflex.  She used a walker and dragged her right foot when the lift was removed.  She stated that she had been using sleeping pills for the past 20 years.  She also suffered from “uncontrollable high blood pressure” for which she was taking regular medication.  The patient had undergone a year of traditional physiotherapy, chiropractic, and rehabilitation with limited results.

Gait analysis revealed that she had an inability to easily flex her right hip.  Manual muscle testing revealed complete weakness on the hip flexors and the foot dorsiflexors and everters bilaterally.  Trigenics was applied to the muscles bilaterally to increase viability of the á-motoneuron at the spinal level via cross-over feedback, whereas Trigenics applied to the ipsilateral antagonist would help to stimulate the contralateral agonist, and vice versa.  TS procedures were applied to the iliopsoas, rectus femoris, tibialis anterior, extensor digitorum longus, fibularis brevis, and extensor hallucis longus bilaterally.  TL procedures were applied to the gluteals, hamstrings, gastrocnemius, and tibialis posterior bilaterally.  TM was applied to the talotibular joint.  In addition, TS procedures were then systematically applied to increase muscle strength to the right upper trapezius, anterior/middle deltoid, supraspinatus, coracobrachialis, biceps long/short heads, and the wrist extensors.  TL procedures were applied to increase muscle length/joint ROM to the right pectoralis major, latissimus dorsi, triceps, and the wrist flexors.  In this case, an Eastern approach was also utilized by applying Trigenics myomeridian procedures to balance her meridians points.  This included work on the bladder channel, LI11, LI4, HT3, ST34, ST36, SP6, BL62, and KI1.  (With Trigenics Myomeridian procedures, TS is used to tonify deficient meridians and TL is used to sedate overactive meridians.)

After the brief treatment, the patient was able to raise her right arm easily, lifting it fully above her head.  She was also able to walk across the room without her foot harness and without dragging her foot.  Her foot also clearly demonstrated dorsiflexion during the swing phase of her gait.  She was also able to lift her leg higher, move faster and with greater ease than prior to the treatment.  She and her daughter were quite ecstatic.

The following day, her daughter called to report that her mother’s blood pressure had dropped more than normal to her usual dose of blood pressure medication.  She said, “I’m sure your treatment must have really lowered her blood pressure, as she has never had this type of reaction to her medication.”

It is believed that, in restoring balance to the neuromuscular system, balance is also restored between the parasympathetic and sympathetic nervous systems.  The above stroke patient had quite obviously been in a constantly facilitated hyper-sympathetic state (hypersympatheticatonia).  Trigenics helped this patient on a local, cerebral, and systemic level.  Many doctors are already well trained in the removal of myofascial adhesions and treatment of articular dyskinesia; Trigenics provides doctors with the additional tools to treat a wider variety of conditions and to provide complete, leading edge, and highly effective care by using a neurological and synergistic approach.  TAC

Canadian-Estonian chiropractor, Dr. Allan Gary Oolo Austin, is the originator of Trigenics.  In March 2004, Dr. Austin will be speaking about Trigenics at the ACBSP Sports Symposium in Las Vegas.  For more information, contact the Trigenics Institute, toll free, at 1-888-514-9355 or by email: [email protected] or visit: www.trigenicsinstitute.com.