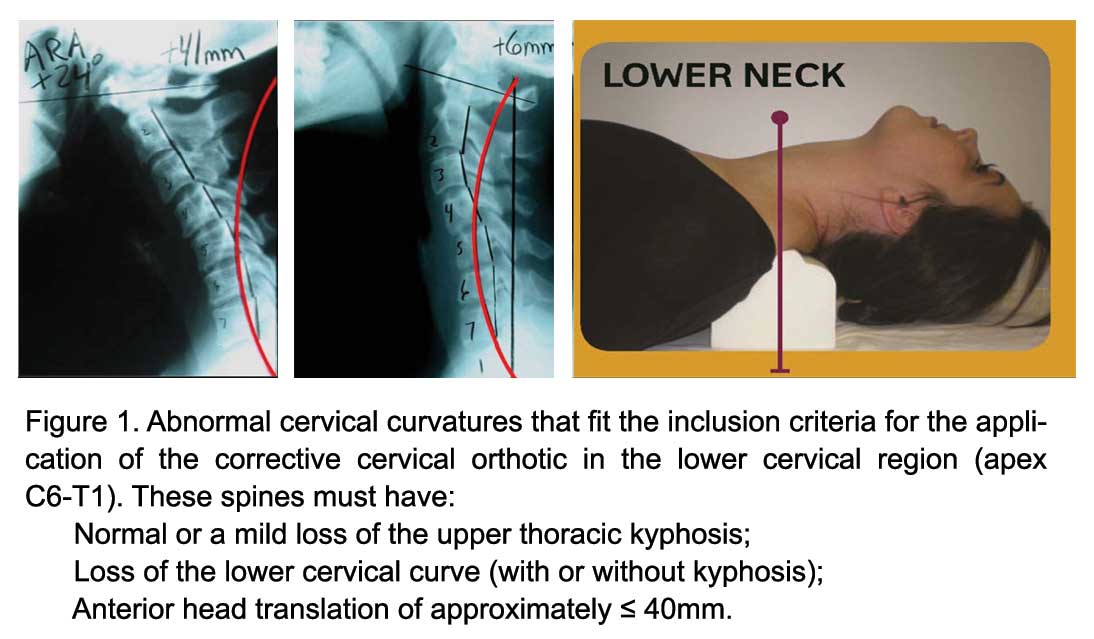 The compression extension cervical orthotic device is a common tool available in the chiropractic profession today with several brands on the market. (Figure 2) The device creates the combination of posterior head translation, cervical extension, and compression force down the long-axis of the spine. Patients must be screened for tolerance to this position and loading; canal stenosis would be contra-indicated for this device.
Problematically, the compression extension wedge also creates an anterior translation of the thoracic spine and an extension of the mid-upper thoracic kyphosis. Typically speaking, the wedge only comes in one size (adult) and, thus, patient selection must be considered when using these devices; pediatric cases don’t fit well on this.

Indications for the Compression-Extension Wedge:
The compression-extension wedge will correct-reduce anterior head translation with loss of the cervical lordosis. The patient’s posterior vertebral body margins (black dashed-line) must be well anterior of the ideal cervical lordosis (red-line after Harrison et al.2). Head translation forward ≥ 25mm and up to ≈ 70 mm typically responds well to this device. However, the patient must also have posterior thoracic translation and increased mid- and upper-thoracic kyphosis, as the wedge will cause an opposite effect. Figure 2

SUMMARY
All home cervical corrective orthotic devices, such as the two shown herein, have indications and contra-indications for appropriate patient application. The cervical corrective orthotic should be fit to the following patient presenting conditions: 1) their symptomatology and severity of spinal arthritis/disc disease, 2) their ability to perform specific movements, 3) their presenting posture of the head and thoracic region, 4) their configuration of the cervical curvature, 5) the presence of any unstable segments, and 6) their configuration of the mid-upper thoracic kyphosis. I hope this presentation assists in your delivery of effective at home devices for rehabilitation of the abnormal cervical lordosis.