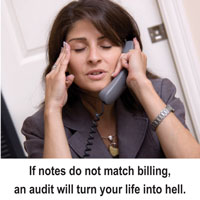 The curse is that insurance companies use computers to burden and audit you. The blessing is greater because the computer protects you from audits, minimizes paperwork and eliminates 95% of paper filing.

Doctors praise Electronic Health Record (EHR) computers. When audited, those doctors produced high quality SOAP records that matched the bills. The only loss was a small amount of time to deal with the audit.

On the other hand, there are horror stories from colleagues that did not have good notes. The auditors came, found the documentation did not match the billing, and demanded refunds from a few thousand to more than half a million dollars. Then the auditors filed complaints with state boards and departments of fraud. If notes do not match billing, an audit will turn your life into hell.

You have the ability to audit proof your office. It begins with fully integrated EHR management and a documentation computer that guarantees notes and billings match. The patient is signed in, the patient’s name automatically appears in the adjusting room, enters the SOAP note including the services performed, the taps and clicks are converted into a dictation quality note, and the documentation generates the charges. The patient signs out electronically, verifying the services and accepting responsibility to pay. In the event of an audit, there is a perfect match between the notes and billing, and electronic proof that the patient received the services.

Take a realistic look at your practice. Do your notes and bills match? If your answer is, “NO,” then you are open to a devastating audit. For your own benefit, fix this dangerous situation before the auditor comes. Use an EHR system and bill only for documented services.

Are there times you perform a service, bill for it, but do NOT document it? An insurance auditor will use this to prove fraud, and there is nothing you can do after the fact to prove the falseness of the accusation. When using an EHR program where documentation produces the billing, there is never a bill that is not documented.

How frequently does a patient tell you something that you do not include in your records? What recommendations to patients are not in writing? Computerized SOAP documentation makes it simple, fast and easy to include these things. Using a tablet computer with handwriting recognition, it is a breeze to just jot something into the progress note and have it appear as if it was typed. Some programs integrate with Dragon Naturally Speaking, allowing you to dictate, converting your speech into typed text. The critical point is to record everything that the patient tells you, as well as to record all the advice and recommendations you gave.

A cash, pay as you go, practice does NOT protect you from audits. Although it reduces the chances of being audited, there are many cash practices that have been audited. The courts ruled that, as soon as a patient submits a receipt for services to insurance, you are held to the same standard as if you were a participating doctor accepting assignment. This means that, even in a practice where every patient pays you up front and you never send anything directly to an insurance company, the insurance company has the right to audit. Some cash practice doctors have had an extremely rude awakening, being required to refund substantial amounts, and then having to deal with departments of insurance fraud. The bottom line is that, no matter what type of practice you have, it is critical that your billing and documentation match.

Documentation extends beyond SOAP notes. Do you send letters to patients? Better EHR office management and documentation systems include templates for letters and documents, and save a copy of each in the patient’s file. Narrative reports are saved as part of the electronic record.

There should be a record of every phone call, including the date and time of the call, who was spoken to and what was said. EHR systems include phone logs in each patient file, and this phone log may save you a lot of grief. A real life example: Several years ago a mechanic came in with severe low back and leg pain. The doctor determined the patient had a disc lesion, and treated it. The patient felt relief and went home with instructions for bed rest and to return the next day. The patient did not return. The doctor called to find out what happened. The patient’s wife answered and reported that the patient felt so much better that he was outside, under his truck, replacing the transmission. The doctor entered this in the patient’s phone log. A few weeks later, the doctor received a records request from an attorney. The records with the log were sent to the attorney, and that was the end of it. The doctor learned that the patient ruptured his L5 disc while changing the transmission, but was blaming the doctor. If the log had not been maintained, the doctor would have had a nasty malpractice suit.

Police reports, MRI or other reports, pictures, explanation of benefits (EOB’s) and other documents need to be part of the patient’s records. EHR programs include the ability to scan these things into the patient’s file, making them accessible at the touch of a button.

In an audit, it is necessary to prove that you are always aware of clinically special items about a patient. This could be a message regarding a condition (osteoporosis, gibbus formation, disc herniation, spina bifida) or to use a specific procedure. EHR programs include these notices as pop ups in the patient’s file, and the record of these pop ups can be printed easily.

The blessing of the right EHR computer system is that it protects you from audits, saves you time in the office, and increases your income. The time to accept and use this blessing is before an auditor pays you a visit.