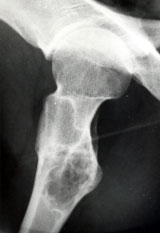 This adult male patient presents with hip pain and a lesion is found on X-ray. Is this likely to be benign or malignant?

The skeletal lesions of fibrous dysplasia are not usually present at birth; they are present, however, several years prior to puberty and often progress throughout the entire life of the patient. Because of the progressive turnover of bone, patients with fibrous dysplasia will have a positive bone scan. All of the bones of the body may be involved; however, there is a particular site predilection for monostotic and polyostotic involvement.1

The most common location for monostotic fibrous dysplasia is in the proximal one third of the femur and the posterior ribs.1 Most lesions affecting the long bones are placed in the diametaphysis and spare the subarticular surface of the bone. This anatomic predilection is helpful in the differential diagnosis of Paget’s disease. Paget’s disease, on occasion, may mimic fibrous dysplasia; however, involvement of the tubular bones in Paget’s disease invariably extends to include subarticular bone.1

The lesions of monostotic fibrous dysplasia are usually radiolucent, often having a loculated or trabeculated appearance (as seen in this case). Scattered throughout the fibrous lesions, there is an appearance of radiopacity. This represents the classic ground glass or smoky appearance of bone. This represents a base matrix of fibrous tissue with scattered osteoid, which Jacobson so appropriately calls the “wipe out of the trabecular patterns” appearance. Many students of radiology have struggled with the phrase “ground glass” appearance of bone. After hearing numerous explanations, the most plausible one offered suggests the appearance of glass following a grinder being used on its external surface to disturb its glistening sheen. This renders a homogenous, ill-defined density across the surface of the glass, which is very characteristic of the appearance within the medullary canal of the bones involved in fibrous dysplasia.1

These geographic cystic lesions are often very well demarcated and, in the monostotic form, usually have a very thick, sclerotic border, referred to by Jacobson as the rind of sclerosis. There is a widening of the medullary canal, and the endosteum is often thinned and scalloped. Expansion of bone is a common finding. Deformity of bone, particularly in weight-bearing bones, is often found and occasionally is associated with pathologic fracture. There is no evidence of periosteal response, except in those cases following pathologic fracture or malignant change. Most of these lesions render a very typical and characteristic appearance, allowing the radiologist to establish the correct diagnosis in a high percentage of cases.1 Often these lesions in the proximal femur are asymptomatic.