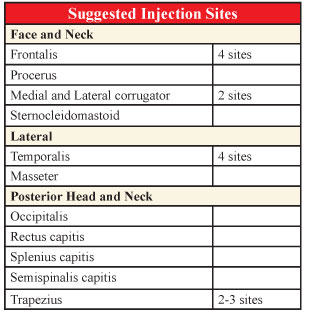 Botox® injections are now being given routinely for migraine headaches, and this has important implications for your practice. Migraine headaches have long defied understanding. These episodic events are a common condition and affect women more frequently than men. They are often credited as having either a neurological, hormonal, or circulatory cause.

The typical migraine headache is described as being one-sided and having a characteristic pulsation that lasts 4 to 72 hours. Nausea and vomiting are commonly associated complaints, as is a heightened sensitivity to bright lights and noise. Only one-third of people who experience migraines get a preceding aura, in which a patient may sense a strange light or unpleasant smell.

Patients often describe that they feel their migraine is precipitated by certain foods and beverages, stress or menstruation. In so-called “silent migraines,” these typical features are present but the headache remains absent.

The exact cause of migraine remains unknown, but the most widespread theories involve the following:

Headaches that occur unilaterally (migraines) have always been differentiated from bilateral headaches caused by muscle tension. That no longer seems to be the case. This change in thinking has resulted from a study reported in a presentation at the American Society of Dermatologic Surgery meeting held November 2-5, 2000. Richard Glogau, MD, professor of dermatology at the University of California, San Francisco, reported that 75 percent of the 24 patients in his small case study experienced four to six months of relief from migraine headaches following injections of Botulinum Toxin A (Botox®) to muscles of the face and head.

Since 1992, Botox® has been used in purified and diluted form to temporarily paralyze the muscles that bring the eyebrows together, thereby eliminating wrinkles in this region. Patients injected with Botulinum Toxin A in the upper third of the face for treatment of cosmetic frown lines (who coincidentally suffered from migraines) reported relief from their headaches. This has led to the following guidelines for selecting patients who can be treated with this procedure.

At the present time, there does not seem to be a specific protocol as to which site of muscle contraction is responsible for each individual patient’s headache and the injections are done on a hit-or-miss basis. The following are the sites most commonly reported.

Botox® has been approved for cosmetic uses such as reducing facial wrinkles, loose skin, and other imperfections. However, it is commonly being used to treat a wide range of other conditions, such as cerebral palsy, for which the drug is not approved by the Food and Drug Administration. In addition to Cerebral Palsy, for which it has had some disastrous results, Botox® is also used for the following conditions:

These “off-label” uses of Botox® account for many of the serious injuries and deaths associated with the drug each year. A lawsuit filed by a Texas firm contends that Botox® has killed four and injured eleven of its clients, and attorneys for the plaintiffs are calling for a halt to promotions of “off-label” uses of the drug and for better training for those prescribing the injections. In their defense, physicians are insisting that cosmetic use is safe and side effects, which include drooping of the eyelid, double vision, and muscle weakness at the injection site, are minimal. They believe that consumers (patients?) who choose off-label treatments should be sure the physician is well trained in treating their specific condition.

Hopefully, I have been successful in pointing out to the reader that a chiropractic examination could pinpoint the exact muscle contractions and associated subluxation pattern in each individual case of muscle tension or migraine headache. Once the exact cause is established, the appropriate therapy becomes obvious. The success rate in these cases should be phenomenal and without the devastating side effects produced by the hit-or-miss injections.

Howard F. Loomis, Jr., DC, President of Enzyme Formulations®, Inc., has an extensive background in enzymes and enzyme supplementation. As president for fifteen years of 21st Century Nutrition® (now the Loomis Institute® of Enzyme Nutrition), he has forged a remarkable career as an educator, having conducted over 400 seminars to date, in the United States and internationally, on the diagnosis and treatment of food enzyme deficiency syndromes. Dr. Loomis welcomes your comments or questions through the Loomis InstituteTM at 6421 Enterprise Lane, Madison, WI 53719 or by phone at 1-800-662-2630.