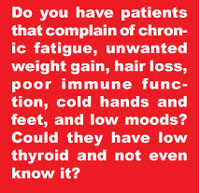 Over 20 million Americans suffer from thyroid disorder. Yet estimates suggest that at least 10 million women with a low-grade thyroid dysfunction go undiagnosed. They simply fall through the cracks.

The main function of the thyroid gland is to take the amino acid tyrosine, along with iodine, and produce the hormones thyroxine (T4) and triiodothyronine (T3). These hormones are essential for life and affect the body’s metabolism, growth, and development.

Normally, TSH increases the uptake of iodine by the thyroid gland and increases production of thyroid hormone.

Women are naturally prone to iodine deficiencies. That’s because the thyroid gland in women is twice as large as in men—so, under normal circumstances, women need more iodine. However, when women are under stress, the need for iodine can double or triple.

Most people believe that you get all the iodine you need from iodized salt. However, I learned first hand that many of my patients were, in fact, very low in iodine. And, in fact, the foods we eat seem to contain less dietary iodine. For example, back in 1940, the typical American diet contained about 800 micrograms of iodine. By 1995, that amount plunged to just 135 micrograms. That’s an 83 percent decline.

If there isn’t enough iodine in our diet, insufficient thyroid hormone is produced by the thyroid, and the person develops symptoms of low thyroid function.

The Journal of Clinical Psychiatry has reported, “Laboratory blood tests for thyroid may be inaccurate for many who get tested for hypothyroid disorder.” And, to complicate matters, T4 needs to convert into T3 for optimal metabolic function. The normal thyroid gland produces about 80 percent T4 and about 20 percent T3; however, T3 possesses about four times the hormone “strength” as T4.

Unfortunately, patients often have a problem converting T4 into active T3. A build-up of the hormone reverse T3 (RT3) actually blocks the conversion of T4 into T3. Most doctors don’t check for RT3.

Reverse T3 is initiated by stress. The more stress, the more Reverse T3 and the more likely T4 isn’t converting into the more active T3. A patient’s blood test may show normal levels but, since T4 is not being converted to T3 within the cells, fatigue and other symptoms associated with low thyroid begin to appear. Individuals taking synthetic thyroid hormones like Synthroid (T4 only) may continue to have the symptoms of low thyroid for years, even in spite of normal blood tests.

The adrenal hormone cortisol is also necessary for the conversion of T4 to the active T3. If the weak adrenals are not addressed, the patient may see little, if no, benefit to thyroid therapy, actually feel worse and/or develop symptoms of an overactive thyroid gland, such as palpitations, a rapid heartbeat, and increased sweating.

And, since nutrition is involved in every aspect of thyroxine (T4) production, utilization, and conversion to triiodthyronine (T3), the minerals selenium and zinc, along with iodine, vitamins A, B2, B3, B6 and C, as well as the amino acid tyrosine are all needed for the production of thyroxine (T4) hormone. A deficiency in any of these key nutrients may lead to low thyroid function.

Not only are blood tests inaccurate, but the parameters for determining who has a thyroid disorder and who doesn’t have been changed. And most doctors don’t even know this!

In the past, those with a thyroid-stimulating hormone (TSH) above 5.0 were considered hypothyroid (low thyroid).

In 2004, The American Association of Clinical Endocrinology (AACE) changed the guidelines so that a TSH above 3.04 is now considered positive for hypothyroid. I routinely get patients who’ve been to their doctor, had a thyroid blood test, which showed their TSH was above 3.04, only to have their doctor tell them, “Your blood tests look normal.”

Dr. Broda Barnes was the first to show that a low basal body temperature was associated with low thyroid. His first study was published in 1942 and appeared in The Journal of the American Medical Association.

Enzymes and their actions are influenced by the body’s metabolic temperature (controlled by the thyroid hormones). When the body temperature is too low, the enzymes slow down, creating hypo-metabolism (hypothyroidism) and reduced metabolism (cellular energy) and every cell and every bodily system starts to slow down, leading to all sorts of health problems. The body works best at the optimal temperature of 98.6.

If you have patients that are sick and tired of being sick and tired, help them uncover a possible low thyroid function by checking for low body temperature, and nutritional deficiencies. For those patients with low thyroid function, over-the-counter thyroid support or glandular supplements often yield amazing results! The sick become well and the tired become energetic once again.

Self Test for Low Thyroid

The test for low thyroid function according to Dr. Barnes protocol: First thing in the morning, while still in bed, shake down and place a mercury thermometer (digital thermometers are not as accurate) under your arm and leave there for ten minutes. Record your temperature in a daily log. Women who are still having menstrual cycles should take their temperature after the second and third days of the period. Menopausal women can take their temperature on any day. A reading at or below 97.8 strongly suggests hypothyroid.

If using a digital thermometer, wait 2 hours after waking up and take under the tongue (don’t eat, drink or brush your teeth ten minutes before taking temperature).

How to Self-Test for an Iodine Deficiency

1. Dip a cotton ball into USP Tincture of Iodine. (You can get iodine at the drugstore for under one dollar.)

2. Paint a two-inch circle of iodine on your soft skin, like the inner part of your thigh or upper arm.

3. If the yellowish/orange stain disappears in less than an hour, it means your body is lacking crucial iodine and has soaked it up. If the stain remains for more than four hours, your iodine levels are fine.