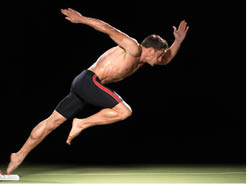 If you’ve been spending hours on the treadmill and not seeing any results, it’s because long distance cardiovascular exercise can decrease testosterone and raise your stress hormone levels like cortisol1. Increased levels of cortisol stimulate the appetite, increase fat storage, and slow down or inhibit exercise recovery.
A recent study in Psychoneuroendocrinology showed evidence of long-term high cortisol levels in aerobic endurance athletes.  Researchers tested levels of hair cortisol in 304 endurance athletes (runners, cyclists, and triathletes) and compared to non-athletes.  The results showed higher cortisol levels with higher training volumes 1.
The Journal of Sports Sciences found that long periods of aerobic exercise increased oxidative stress leading to chronic inflammation2.
If you want to see results fast without the negative benefits of cardiovascular exercise your best option is burst training3. Burst training (aka interval training) combines short, high intensity bursts of exercise, with slow, recovery phases, repeated during one exercise session.  Burst training is done at 85-100% maximum heart rate rather than 50-70% in moderate endurance activity.
Similar exercise methods to burst training include High Intensity Interval Training (HIIT) and the Tabata method.
With burst and other types of interval training you are getting the same cardiovascular benefits as endurance exercise but without the negative side effects.
Essentially, burst training is exercising like a sprinter rather than a marathon runner.
One of the major benefits of burst training is that it can be done in the comfort of your own home with no or minimal equipment.  An example of burst training would be going to a track and walking the curves and sprinting the straight aways.  Or getting on a spin bike and cycling hard for 20 seconds then going easy for 20 seconds then repeating that effort for between 5 to 40 minutes.
Burst (or interval) training isn’t necessarily new. Elite athletes and Olympians have known this secret to exercising and have been doing interval training for years. The research proves that anybody – not just elite athletes – can do interval training and achieve amazing results.
Research from the University of New South Wales Medical Sciences found that burst (interval) cardio could burn more than 3 times more body fat than moderate cardio. The researchers studied two groups and found that the group who did eight seconds of sprinting on a bike, followed by 12 seconds of exercising lightly for 20 minutes, lost THREE TIMES as much fat as other women, who exercised at a continuous, regular pace for 40 minutes 4.
:dropcap_open:The reason burst training works is because it produces a unique metabolic response in your body.:quoteleft_close:
The reason burst training works is because it produces a unique metabolic response in your body. Intermittent sprinting causes your body to not burn as much fat during exercise but after exercise your metabolism stays elevated and will continue to burn fat for the next 24-48 hours!
Also, chemicals called catecholamines are produced which allow more fat to be burned and this causes increased fat oxidation which drives greater weight loss. The women from the study lost the most weight off their legs and buttocks.
Another study published in the Journal of Applied Physiology, April 2007, researched eight different women in their early 20’s. They were told to cycle for 10 sets of four minutes of hard riding, followed by two minutes of rest.
After two weeks, the amount of fat burned increased by 36 percent, and their cardiovascular fitness improved by 13 percent 5.
Key Benefits of Burst Training:
If you want an incredible burst training program to follow check out www.burstfit.com.
References
Dr. Josh Axe is the author of the real food diet cookbook, popular radio show host, and founder of DrAxe.com and BurstFIT.com. His articles and videos are shared across the world and his mission is to help transform the health of this world. Dr. Axe graduated with his doctor of chiropractic degree from Palmer College in Florida.