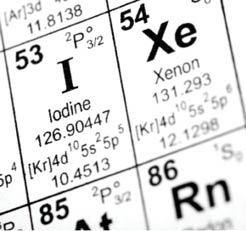 :dropcap_open:D:dropcap_close:r. Theresa Dale maintains that every cell in the body contains and utilizes iodine, and is an ongoing, DNA-driven process throughout life. The current iodine deficiency crisis absolutely merits consideration. The facts reflect that, on a daily basis, iodine is essential to life itself.

The most recent National Health and Nutrition Survey (NHANES study performed every 10 years) found that in the United States, human iodine levels declined 50% over the 30-year period of 1971 to 2000. The World Health Organization (WHO) stated that 129 countries have soil that is profoundly iodine deficient; one-third of the world’s population live in iodine deficient areas; and mortality rates are 50% higher in iodine-deficient populations. These facts are called “clues.” Currently, iodine deficiency affects 72% of the world’s population. These statistics motivate Dr. Dale to focus on general causes and solutions of iodine deficiency.
What are the foremost causes of iodine deficiency? Here are 10 disturbing reasons, just to name a few:
Eliminating cellular radiation has become a necessity, which needs a patient’s chiropractor needs to address effectively. Radiation is present from Fukushima, EMF, and EMR, including the medical exposure to radiation. Ionic iodine along with homeopathy is the best way to protect the body and eliminate intracellular radiation.
Fluorine, chlorine, bromine, iodine, and astatine are called “halogens” or “salts” in group 17 on the periodic table, and they all have precisely seven electrons in their outer shells. Based on atomic weight, fluorine, chlorine, and bromine are able to “displace” iodine because they can attach to the same receptor sites. Thyroxine, an important thyroid hormone comprised of one tyrosine molecule plus four iodine molecules, can be constructed with four molecules of fluorine, bromine, and/or chlorine—instead of iodine—rendering the T4 absolutely useless.
Approximately 4% of the body’s mass consist of minerals, and under normal circumstances, the body contains approximately 20 to 30 mg of iodine, most of which is stored in the thyroid gland located in front of the neck, just under the voice box. Smaller amounts of iodine are also found in lactating mammary glands, the stomach lining, salivary glands, and in the blood. Interestingly, women have a higher iodine need than men do and iodine is a core “essential” element in fetal development.
According to Dr. Dale, author of Revitalize Your Hormones and Transform Your Emotional DNA, without sufficient iodine the body is unable to synthesize these thyroid hormones. Because these thyroid hormones regulate metabolism in every cell of the body, playing a role in virtually all physiological functions, an iodine deficiency can have a devastating impact on health and well-being.
Thyroid hormone synthesis is tightly controlled. When the amount of thyroid hormone in the blood drops, the pituitary gland secretes a hormone called thyroid-stimulating hormone (TSH). As its name suggests, TSH then stimulates the thyroid gland to increase its uptake of iodine from the blood, so that more thyroxine (T4) can be synthesized. By definition, T4 contains four iodine atoms. When necessary, thyroxine is then converted to the metabolically active triiodothyronine (T3), a process that involves stripping one iodine atom from T4. In areas where there is little iodine in the diet, typically remote inland areas and semi-arid equatorial climates where no marine foods are eaten, iodine deficiency gives rise to hypothyroidism, symptoms of which are extreme fatigue, goiter, mental slowing, depression, weight gain, and low basal body temperatures, to name some indicators.
:dropcap_open:Iodine deficiency is the leading cause of preventable mental retardation, a result that occurs primarily when babies or small children are rendered hypothyroid by a lack of the element.:quoteleft_close:
Iodine deficiency is the leading cause of preventable mental retardation, a result that occurs primarily when babies or small children are rendered hypothyroid by a lack of the element. The addition of iodine to common table salt has largely eliminated this problem in wealthier nations, but as of March 2006, iodine deficiency remains a serious public health problem in the developing world. Iodine deficiency is also a problem in certain areas of Europe. It has been estimated to cause a billion dollars in healthcare costs per year in Germany. Iodine levels have fallen 50% over the last 30 years (from an already seriously low level), and throughout this time there has been a simultaneous increase in thyroid related conditions, autoimmune disorders, and numerous cellular mutagenic problems.
In alignment with this information, Dr. Dale probed into three or four areas where dietary and lifestyle changes, along with preventative proprietary ionic iodine supplementation, may improve health.
Minerals cannot be made in the body and must be obtained from our diet. Concentrated food sources of iodine include sea vegetables, yogurt, cow’s milk (preferably raw), eggs, strawberries, and mozzarella cheese. Fish and shellfish can also be concentrated sources of iodine. When dietary sources are not enough, or when foods that contain adequate amounts of iodine are now toxic and adulterated, Dr. Dale recommends using biologically available ionic iodine, yet warns of the dangers of taking the wrong type of iodine. Doctors and all healthcare practitioners want to be well informed about minerals and their interactions now more than ever.
Theresa Dale, PhD, CCN, NP, Founder, The Wellness Center for Research & Education, Inc.Dean, California College of Natural Medicine 502c3. You can call Dr. Theresa Dale at (866) 962-6484 or visit: http://www.wellnesscenter.net