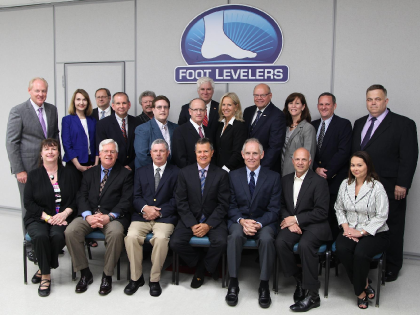 Foot Levelers Chairman and CEO Kent S. Greenawalt expressed appreciation for the ACA accepting an invitation to hold the meeting in Roanoke, “It was an honor to host the ACA Board of Governors at Foot Levelers during their 50th Anniversary year. The ACA’s 50 years of tireless work to achieve the highest clinical and ethical standards, and the freedom of choice of healthcare providers, as well as its pursuit of the optimal health for the healthcare patient are endeavors we’re proud to support.”
The 13-member panel spent a weekend at Foot Levelers holding one of its two yearly meetings, covering the organization’s plans to fulfill its mission of preserving, protecting, improving, and promoting the chiropractic profession. The meeting also gave Foot Levelers the opportunity to use its newly designed Boardroom, which features state-of-the-art audio/visual equipment, WiFi, and new office chairs and meeting tables.
Dr. Keith Overland, the current President of the ACA, on the Board of Governors’ meeting being held at Foot Levelers, “I am very thankful to Foot Levelers for providing ACA’s Board of Governors (BOG) with the distinct honor of holding its semiannual meeting at the company’s offices in Roanoke. Foot Levelers and the ACA have had a strong partnership for many years, and its entire staff could not have been more gracious while we were there.”
Foot Levelers President Dwayne Bennett echoed Greenawalt, “Hosting the ACA Board of Governors is a privilege for Foot Levelers. Our company and their organization are mutually aligned to advance the chiropractic profession and to support the practice of the individual Doctor of Chiropractic.”
Former member of the ACA House of Delegates and current Foot Levelers Vice President of Education Dr. Mark Zeigler also welcomed the ACA, “I previously served eight years with the House of Delegates, so it was wonderful to see my friends and colleagues again and especially to have hosted them at our home campus in Roanoke.”
About Foot Levelers

Foot Levelers, Inc., world’s exclusive provider of individually designed Stabilizing Orthotics and other therapeutic products, has been serving healthcare professionals for over 60 years. Foot Levelers supports every step patients take to enjoy fuller and happier lives at work, home, or play.
Visit FootLevelers.com, like us on Facebook, and follow us on Twitter (@FootLevelers) to learn more about Foot Levelers, Inc.