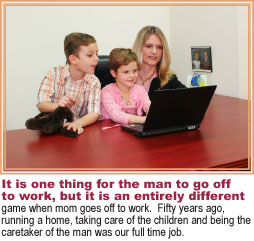 When I was thirteen, my two-year-old brother was suffering from a serious case of torticollis, which had been misdiagnosed as possible meningitis. After just one chiropractic treatment, he was virtually cured. At that moment, I knew that my contribution to healthcare would be in the chiropractic field.

Like any idealistic young chiropractic student, I was electrified by the story of Harvey Lillard getting his hearing back after one adjustment from D.D.—the first chiropractic adjustment in history. I expected that kind of result routinely but, too often, the reality didn’t live up to my hopes.

I now know that, in today’s modern world, innate intelligence can be compromised by things other than subluxations. The body’s inherent wisdom has the healing potential to repair anything, but sometimes it doesn’t. The body cannot meet all its challenges successfully without the proper genuine replacement parts in the form of nutritional support. If that realization sounds simple, getting there was anything but easy.

Being a perfectionist, I was continually beating myself up over the patients I wasn’t helping; I went to seminar after seminar in search of new answers, better solutions, and more reliable techniques.

The breakthrough came with learning not to diagnose, but simply to ask the body what was missing, and in what priority. The nutritional technique that I incorporated into my practice is a whole story in itself. Suffice it to say that I found the method I was looking for, and everything else fell into line, except for one thing: there were patients who really didn’t come to be helped, or who had gone down the medical road so long that they were beyond the reach of nutritional help. You have to let those go. When they walk into your office, check them out, and don’t take them on unless you can actually get a win by helping them. You actually help fewer people when your attention is fixated on a case that came to you too late. Don’t be a martyr. That was the advice of my greatest mentor, and I pass it along to anyone else who can relate to this story.

As a result of these breakthroughs in my practice, I was able to accept myself as an effective, valuable contributor to my community.

The majority of my practice consists of the “Supermoms,” females in the 35 to 55 age group. They need your help. And, since I am one of them, I know this for a fact. Getting into this profession, I never realized the challenges that would come with it as a female who also chose to have a family. It is one thing for the man to go off to work, but it is an entirely different game when mom goes off to work. Fifty years ago, running a home, taking care of the children and being the caretaker of the man was our full time job.

In today’s society, women are expected to do that “on the side,” so there is a real finesse to keeping it all going, not just as a chiropractor mom, but even just as a working mom, in general. When I tell people my life and my schedule, they always ask, “How in the world do you get it all done?”

So, here are the secrets. Number one is keeping myself and my family healthy. And, as I mentioned earlier, though we all get chiropractic adjustments, with the food sources today, it just isn’t enough. The key is what I have found in the nutritional realm. In addition to chiropractic adjustments to keep everyone well, nutrition is the thing that seals the deal. This is what allows me to keep up such a hectic schedule and get it all done. We don’t get sick and, if we do, it is very rarely, because, as we all know in chiropractic, an ounce of prevention is worth a pound of cure. To a working mother, it is probably more like a ton. When you are regularly adjusted and are on the correct nutritional program, you can nip this one in the bud for sure.

These women are the ones who have to keep things together at home with the husband and the kids while also working a full-time job, no matter how bad they feel. They need our help and no one is specializing in them and giving them the TLC they need. When you help mom, you have not only helped her but you have also helped the husband and the children. And, before you know it, she is bringing them in for care as well.

Her chief complaints tend to be stress, fatigue, weight issues and depression. But she can come with more symptoms that you can name. I don’t worry about or get caught up in her symptoms, because I don’t treat symptoms. I find the true cause of the dysfunction which, usually, stems from nutritional deficiencies. When these are properly handled, the body will heal itself and miracles will occur.

What is great about handling the true cause is that you can position yourself as the expert of any health problem. By tapping into the innate intelligence of the body, you let it tell you what is wrong and then you can fix it.

I have seen true miracles in my practice by making a so-called “incurable” disease process disappear, having bone density restored without drugs—as verified by medical diagnostics. I have resolved the hot flash case without natural or synthetic hormone therapy of any kind. I have resolved the gall bladder attack cases, even after the gall bladder was removed. Most cases have substantial improvement in energy levels in just one week and routinely experience weight loss as a great “side effect” of the program. I routinely resolve the chronic subluxation case that doesn’t budge, despite the fact that they are seeing my colleagues and receiving great adjustments.

Any time I hear of my patient going for chiropractic, physical therapy and/or other related musculo-skeletal treatments more than six visits, I then begin to do my detective work and find out what is really going on. D.D. Palmer, in his original writings, cites examples of serious illnesses completely resolving in three to six visits. I became curious as to how 36 visits became the norm in modern-day chiropractic. I found the answers in Nutrition Response Testing.

A mother brought me her four-year-old boy who presented with severe symptoms of autism. There were so many quirks and functional abnormalities that social workers were working with the boy three days a week. This had gone on without improvement for over two years.

I did a routine analysis. Interestingly enough, the priority of this child was his gall bladder. Based on my findings, I made some nutritional supplement recommendations and a few dietary modifications and within six weeks the child was substantially improved. The social workers told the mom it was a miracle—all of a sudden, their years of working with the little boy were finally paying off. They didn’t know yet that he was under my care.

Within three more weeks, the social workers pronounced him “cured.” There had been a complete resolution of all of the autistic symptoms—no more rocking of the body and head, no more flapping of the hands. His behavior was fully rational. The social workers decided the little boy should be considered normal after nine weeks of nutritional care.

I worked with a woman who had been suffering from Crohn’s disease for seven years. None of the medical treatments had done her any good, and she was doing an intense steroid drug therapy just to get through her day. Within three days of following the exact program I recommended, the patient was totally asymptomatic.

One of my most dramatic cases was a man who was on three different psychotropic medications. This poor gentleman was not doing well at all in life and really wasn’t functioning in society. He was 75 pounds overweight, with dark black circles under his eyes. He literally looked like the living dead. After doing the Nutrition Response Testing procedures, a year later he has all of the excess weight off, is off all three of the psychotropic drugs, holds a full time job, and—much to my surprise—is a very handsome and charming man; something that I surely had not seen a year earlier.

I feel very optimistic about the future of health care in this country, because of what I’ve learned and what I can do. This future starts by supporting the “Supermom” who is our most important patient. You just need great products, a great testing methodology, and a patient management system that keeps the practice stress-free. I feel truly blessed to have all three.

Dr. Lori Puskar lives in Clearwater Florida and is a member of the Florida Chiropractic Association. She is also married, the mother of a 5 and 7 year old, and a full time executive for Ulan Nutritional Systems, Inc. Dr. Puskar also delivers Nutrition Response Testing seminars locally and across the country and has spoken to thousands of doctors educating them on the need for real nutrition. She has built a highly successful nutritional cash practice in Hazleton, Pennsylvania, and still oversees the practice till this day. She is a stanch supporter of non-profit nutritional organizations preaching the truth in nutrition such as the Dr. Weston A. Price and Dr. Francis Pottenger Foundations. In addition she is active in groups regarding our children’s future such as fightforkids.org and Citizens Commission on Human Rights.