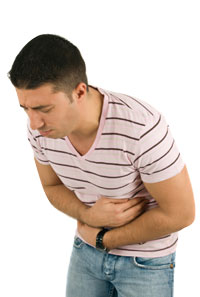 Marjorie was a 62 year old chiropractor’s wife who presented in my office with classic signs of acute cholecystitis- a gall bladder attack, along with the presence of gallstones. She had severe right-sided abdominal pain, radiating into her right shoulder, as well as excessive belching, nausea and bloating. She had been up most of the night. Examination revealed exquisite abdominal tenderness under her right rib cage and a positive Murphy’s Sign. She had a history of previous gall bladder attacks, which led her to have an ultrasound confirming the presence of gallstones. She was accompanied by her husband.

While contacting the painful region over the gall bladder, I directed a very specific type of pressure to a group of nerve roots along the dorsal spine. 6,7 In a short time, the previously tender region on the abdomen was no longer painful! I held the specific reflex for 40 seconds. Soon, the patient was almost completely asymptomatic. I told the patient to avoid the most common foods that may trigger a gall bladder attack: eggs, pork, onions, chocolate, citrus, and milk.

On the next visit she reported no further symptoms. In the next few months I was in contact with the patient, she had no further attacks, though she did notice that ingesting certain foods tended to give her digestive discomfort.

The soft tissue technique works by providing a unique type of pressure to spinal nerves innervating the digestive tract, blocking pain impulses and normalizing function. 6,7 I’ve successfully treated many cases of acute and also chronic gall bladder pain, almost always with instant success. By itself it may be enough, especially with post surgical pain (e.g. pain that continues after the gall bladder is removed). However, recurrence of gall bladder pain is most often due to ingestion of foods the patient is allergic to. 1,2,12

Many gall bladder attacks are triggered by food allergies

James Howenstine, M.D., 5 and Jonathan Wright, M.D.,12 estimate that many gall bladder surgeries are unnecessary. Attacks can be reduced or eliminated by avoiding foods that the patient is allergic.

James Breneman, M.D.,1,2,12 was chairman of the Food Allergy Committee of what is now the American College of Allergy and Immunology. Dr. Breneman reported that 100% of a group of 69 patients had full relief of gallbladder pain when they avoided foods they were allergic to. They had painful attacks when they reintroduced the offending foods. The most common foods were eggs, pork, onions, chicken, milk, coffee, oranges, and beans.

500,000 gall bladders are removed each year, yet gallstones often cause no symptoms!

Many chiropractors or their spouses have had their gall bladders removed, along with 500,000 other Americans each year. The most common reason for surgery is the presence of stones, and the assumption that the stones are causing recurring attacks of pain. According to the American College of Gastroenterology, 80% of patients with gallstones have no symptoms of pain (silent gallstones)! The risk of silent gallstones actually causing a gallbladder attack is only about 1% per year. 9

Much chronic pain attributed to gallstones is actually due to intestinal pain, not gallstones. A number of studies have shown that patients with irritable bowel syndrome have a threefold higher risk of gallbladder surgery than the general population. 4,10 Gallbladder problems are twice as common in women as men, frequently occur during or after pregnancy, and occur more often in the overweight. Exercise helps prevent the occurrence of gallbladder problems.

Gallstones themselves are not eliminated by allergen avoidance, but many studies have shown that many gallstones cause no pain. Therefore, my strategy for many years is to stop the acute pain using our soft tissue procedure and give the patient dietary instruction to prevent recurrence. I have done this on many patients and many of them have had resolution of their gall bladder dysfunction, without surgery.6,7

Gallbladder pain without the gall bladder!

I’ve also treated many doctors at seminars with either acute gallbladder pain, or post cholecystectomy syndrome (PCS). In PCS, the pain continues even after the gallbladder is removed. 8,11 Studies estimate this occurs in 5-30% of patients who have surgery. This makes it quite common; almost 100,000 patients a year who continue to have gallbladder pain even though their gallbladder has been removed! In most of the cases we’ve treated so far, the pain has been dramatically relieved after performing the above mentioned soft tissue techniques.

This article is for educational purposes only and does not constitute medical advice. Any patient with gall bladder or digestive problems should seek treatment from a physician.