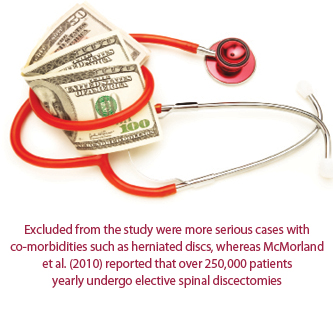 :dropcap_open:T:dropcap_close:he parameters for the utilization and timing of chiropractic care are seemingly misappropriated in mandated guidelines at the expense of the general public and public and private insurers who end up spending more at the end of the day based upon current literature. These incorrectly mandated utilization guidelines increase recurrence and ensuing disability of the injured while not taking into account complex diagnosis. A 2010 study by Becker et al. reported the incidence of low back pain (LBP) in the United States at 22.5% of the population. On September 11, 2011, according to the US Census Bureau, the population of the United States was exactly 312,227,241. If you factor in the 22.5% of patients that experience low back pain, that equates to 70,251,129 people yearly having low back pain. According to Dagenais et al. (2008), “The largest proportion of direct medical costs for LBP was spent on physical therapy (17%) and inpatient services (17%), followed by pharmacy (13%) and primary care (13%). Among studies providing estimates of total costs, indirect costs resulting from lost work productivity represented a majority of overall costs associated with LBP” (p. 8).

Wasiak et al. (2007) reported in the Journal of Occupational Medicine in a study sponsored by the Liberty Mutual Research Institute for Safety that their findings did not support a benefit of longer chiropractic care in preventing work-disability in occupational low back pain. A limitation in that study was that it did not actively seek non-complicated, non-severe occupational low back pain in an attempt to homogenize the results. Excluded from the study were more serious cases with co-morbidities such as herniated discs, whereas McMorland et al. (2010) reported that over 250,000 patients yearly undergo elective spinal discectomies, many as sequellae from occupational injuries. The study reported that “Both the surgical and chiropractic groups reported no new neurological problems and had only minor post-treatment soreness. 60% of the patients who underwent chiropractic care reported a successful outcome while 40% required surgery and of those 40%, all reported successful outcomes. This study concluded that 60% of the potential surgical candidates had positive outcomes utilizing chiropractic as the alternative to surgery” (McMorland et al., 2010, p. 582).

It is these types of conditions that are excluded from the Journal of Occupational Medicine and Liberty Mutual’s study that render a full perspective on the benefits of chiropractic care both as a first line treatment modality and as an option for the care of more serious conditions other than non-complicated low back pain. Municipalities such as the New York State Workers’ Compensation Department have adopted treatment guidelines based upon the work and conclusions of the American Academy of Occupational Medicine, whom they hired to create treatment guidelines with the ultimate goal of limiting care.

Cifuentes et al. (2011) reported the following in Journal of Occupational and Environmental Medicine in another study sponsored by the Liberty Mutual Research Institute for Safety: “In work-related nonspecific low back pain, the use of health maintenance care provided by physical therapists or physician services was associated with a higher disability recurrence than in chiropractic services or no treatment.” Cifuentes et al. went on to report, “In general…those cases treated by chiropractors consistently tended to have a lower proportion in each of the categories for severity proxy compared to the other groups; fewer used opiates and had surgery. In addition, people who were mostly treated by chiropractors had, on average, less expensive medical services and shorter initial periods of disability than cases treated by other providers” (p. 399).

:quoteright_open:Convicted felons have more rights than New York has given its injured workers.:quoteright_close:

The caveat for other municipalities who are looking at the New York State Workers’ Compensation system as a model is that the 2007 study, which appears to be the governing principle for the acute care guidelines created (no references were made available to the profession), has no regulatory mechanism put in place to alter those now outdated policies without enacting new legislation. Every day that those antiquated guidelines stay in place, the State of New York is losing money by forcing its injured to seek alternative care that has proven more expensive, more invasive and less effective through opiates or surgery. New York has placed a “variance” mechanism for additional care that is under the control of the myopic carriers who, over the last 18 months, have followed their historic pattern of deny, delay and defend, once again forcing the patient into more expensive and invasive care. New York has also removed the civil liberties from the patient by not allowing him/her to “opt-out” of the workers’ compensation system and pay cash; it is impermissible. Convicted felons have more rights than New York has given its injured workers.

The 2011 Journal of Occupational and Environmental study was conclusive, showing chiropractic to be far superior in treating chronic care patients. However, that has been ignored by New York State, forcing patients to more expensive, far less effective conservative care, addictive opiates and surgery. The system created to save the State of New York money is now primed to cost New York more money because 1) no mechanism was put in place to consider the long-term needs of the injured or allow changes without acts of legislation or swift regulatory changes as evidenced by the above study being published 4 months AFTER the 2001 implementation date, 2) The American College of Occupational and Environmental Medicine specialists brought in to create the guidelines implemented in 2010 did not consider the complete set of independent studies proving chiropractic more effective and less costly and 3) The chiropractic profession was not part of the guidelines committee comprised to help craft guidelines that were usual and customary for chiropractic care, leaving utilization guidelines to actuaries and physicians with no chiropractic experience.

Based upon the global utilization statistics and research findings, chiropractic care is grossly underutilized, effectively increasing both the direct cost of health care for low back pain in both non-complicated and complicated cases. In addition, the resultant indirect costs including, but not limited to, disability benefits and increased work absenteeism effectively lower both the tax base and productivity.

Dr. Owens has established the nation’s first chiropractic elective in a Family Residency Program with the SUNY at Buffalo School of Medicine and Biomedical Sciences.  He has developed and credentials chiropractors to teach courses approved for CME credit to the medical community. He can be reached at 716-228-3847.

:dropcap_open:L:dropcap_close:ow back pain is our major cause of lost workdays and workers’ compensation claims in the United States, and heart attacks are our major cause of death. Research suggests that both problems result from the same underlying cause: the high blood cholesterol levels that result from eating the standard American diet. By helping to raise their patients’ awareness of a heart-healthy diet, chiropractors may help to reduce the patients’ risk of heart attack, as well as helping to prevent damage to the structures of the spinal column.

Atherosclerosis is the buildup of fatty material inside the arteries. Autopsy studies have shown that fatty streaks start to appear even in the arteries of children in Western industrialized societies.1 As the disorder progresses, these deposits may thicken and harden and eventually obstruct blood flow. When atherosclerosis restricts blood flow to the heart muscle, it produces a form of chest pain called angina. If an atherosclerotic lesion bursts and creates a blood clot, it can cause a sudden but complete blockage of blood flow through the artery. As a result, the tissue that the artery was supposed to supply with blood could die of suffocation. This area of tissue death resulting from obstruction of an artery is called an infarct. When this problem occurs in the heart muscle, it’s called myocardial infarction. When it occurs in the brain, it’s called a cerebral infarction or ischemic stroke.

Atherosclerosis is a systemic problem and can cause problems throughout the body. The atheromatous plaque tends to build up at the spots where arteries divide into smaller branches. Thus, the branching arteries that serve the lumbar spine are especially susceptible.2 The restriction of blood flow through the spinal arteries is a particular problem for the intervertebral discs, because they already have limited access to oxygen and nutrients.

Intervertebral discs are not supposed to have blood vessels, at least not after early childhood. Neither are they supposed to contain nerve endings.  Unfortunately, if the circulation to the structures of the back is compromised badly enough, the body may try to compensate by promoting the growth of new blood vessels that invade the damaged intervertebral disc.  Unfortunately, these new blood vessels can be accompanied by nerve fibers that can penetrate deep into the intervertebral disc.4 The abnormal presence of these nerve fibers may play an important role in chronic back pain. The role of atherosclerosis and abnormal innervation of intervertebral discs in causing back pain could also help to solve a mystery that has puzzled chiropractors and neurologists for years:  Why it is often so difficult to pinpoint the cause of a patient’s back pain on an X-ray image.

:dropcap_open:The Framingham study had shown a statistical relationship between low back pain and calcific lesions.:quoteleft_close:

A low-fat (~10% of calories), plant-based diet works in three ways to reduce serum cholesterol levels.9 First, it contains zero cholesterol, which is found only in foods of animal origin.  Second, a low-fat diet results in less production of cholesterol by the liver, because one of the main functions of cholesterol is to aid in the digestion of fats. Third, the fiber in plant-based foods helps to bind cholesterol in the intestine and carry it swiftly out of the body, before it can be reabsorbed and recycled.

The diet that has the best track record for preventing and reversing heart disease consists entirely of low-fat plant foods. It contains no oil or shortenings. Thanks to the increasing popularity of low-fat vegan diets, it has become easy to find cookbooks to support this kind of diet.

One of the most important clinical studies of dietary modification for reversal of heart disease is a 20-year study that was undertaken by Caldwell Esselstyn, MD, of the Cleveland Clinic. The purpose of this study was not so much to prove that heart disease could be arrested and reversed if people started eating better. That fact was already obvious because of the sharp decline in heart disease deaths in Norway during World War II. Rather, its real significance was to show that a dedicated clinician could help patients achieve this kind of success voluntarily, even when they had easy access to high-fat, high-cholesterol foods.

When it comes to preventing heart attacks and even preventing low back pain, what healthcare providers need is not more technology but better success in persuading patients to adopt a healthy lifestyle. Chiropractors have the potential to make a particularly important contribution to their patients’ health by educating their patients about how their food choices affect the health of their spine. The most important caveat is this: Patients who have any complicated medical problem may need a special nutritional consultation with a registered dietitian or diabetes educator before they make any significant change in diet.  Likewise, patients who are taking prescription medication should talk to the prescriber before changing their diet.  Otherwise, they could be at serious risk for adverse events such as a food-drug interaction or a sudden decrease in blood pressure or blood sugar.

Laurie Endicott Thomas has worked as a medical editor and writer for more than 20 years. She is the author of the upcoming book Where Do Gorillas Get Their Protein? Her Web site is www.gorillaprotein.com and she blogs at www.wheredogorillasgettheirprotein.blogspot.com

6. Esselstyn CB, Jr. Updating a 12-year experience with arrest and reversal therapy for coronary heart disease (an overdue requiem for palliative cardiology). Am J Cardiol 1999;84(3):339-41, A8.