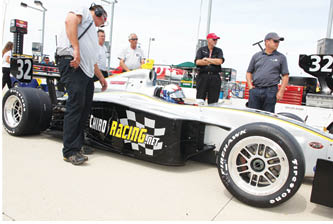 :dropcap_open:W:dropcap_close:hen Brandon Wagner steps into his IndyCar, few truly understand how chiropractic health and guiding a 200-mph missile while strapped into tight quarters come together. Actually, it’s a challenge that the future chiropractor would confront every chance he could. The physical stress of racing is anything but chiro-friendly, which is why this 24-year-old race car driver is the perfect spokesperson for chiropractic awareness.

“Maintaining chiropractic health keeps me conditioned for racing,” says Wagner. “I feel better mentally and physically, and I’m more confident just knowing I’m prepared for the physical burden this sport demands.”
The thrill of excessive speed and the adrenaline rush of living on the edge while enduring 3.5 gs in every corner personifies any competitor, even though their body may disagree. Regardless, regular adjustments allow him to enjoy the “rush” in good conscience.
“I want my body to function at 100% while racing, and with chiropractic care I know I’m physically prepared. Racing is dependent on physical wellness and stamina, and chiropractic treatments improve one’s overall well-being,” he says. “Chiropractic health is essential to this sport!”
Despite growing up with chiropractic, it wasn’t imposed on him, even though his first adjustment happened within hours of birth. “I had a few other career interests, but I elected for chiropractic because it’s something I’m passionate about and a mindset that I could see myself loving for the rest of my life.” Having spent a majority of his career with compromised posture, he understands the benefit of regular treatments. “Good health is a lifestyle choice which requires discipline.”
Brandon knows plenty about discipline. “No one can compete in racing without a good deal of discipline spent training and conditioning.” But when you love something this much, it’s not a sacrifice.
“The speed and atmosphere are unlike anything else. When my racing career began in go-karts, I had only one objective and that was to someday race in the Indy 500.” Pursuing his dream would find Brandon asking for legal emancipation from his parents at the age of 16, allowing him to race faster cars while climbing the ladder to the top step in motorsports. While most would crumble under the level of intensity, Brandon goes to the track because “he loves the escape.”
No doubt, this combination of daredevil/academic is extremely challenging and we believe that Brandon will excel in both professions. His team-oriented principles will serve him well.
“Being around the right people in racing is very important,” he explains. Brandon fully understands the need to represent himself, his sponsors and his team with poise. This ideal is more than a pretentious mission statement, too. He always credits his entire team and acknowledges the talents of all who contribute to his success. “A driver must have immense trust for the other drivers on the track. Trusting the people you work with and building off each member of the team leads to success.”
When asked about his greatest mentors, Dario Franchitti, Will Power and the late Dan Wheldon were highly influential to Brandon’s unique “education”. And, he is thankful to all who have influenced him, including his racing family as well as his personal family.

“Davey Hamilton has taught me a lot about the race car and has led by example away from the track, too.”
Dan Wheldon impressed on Brandon about how important the fans are. “This sport is all about the fans,” says Brandon, “and making time for them is the easy part.”
Treating people with respect is a priority for Brandon and he believes growth and success are defined more by his actions than his achievements. “A résumé is more than just stats. Mine would hopefully tell more about me as a person than just a driver or a doctor.”
Brandon’s character has evolved from a wonderful family upbringing centered around deep moral values and the appreciation of a solid foundation of principles. His father, Dr. John Wagner, founded Wagner Chiropractic in Lafayette, Indiana back in 1976, and has led Brandon and his siblings by obvious example. An integral part of Brandon’s development and success, his father has supported his racing endeavors in several ways. ChiroRacing.net was designed to promote two of Dr. Wagner’s greatest passions: Brandon and chiropractic. The ChiroRacing project merges both racing and chiropractic, two worlds which are finding new ways to coexist while sharing an incredible message with race fans everywhere.
Dr. Wagner’s other half is also a major influence on Brandon, as are his older brother and sister. Mother, Shari Wagner, rarely misses an event, despite how difficult it might be to watch her son battle the dangerous elements of motorsport. By now, she should be accustomed to it since her oldest son, Nick (30), also races. Nick competes in short-track pavement midget cars and the two brothers will occasionally clash on the same track, elevating Mom’s stress levels. However, Julia (26) is not a racer but is a big supporter of her two brothers. She shares the Wagner passion for chiropractic, currently attending Palmer School of Chiropractic in Iowa, and is eager to join the family practice in the next two years.
Thanks to the support and positive examples in his life, Brandon has more than impressive stats to carry him to the next level. Success is not optional in the Wagner family and he is a firm believer in pursuing goals. “Put everything you have into following your hopes and dreams,” he advises, “and spend time doing something you truly love.” If all goes to plan this May, Brandon will become the first chiropractic student to compete in the Indianapolis 500. After attending classes at Purdue University, he will follow his father and sister to the Palmer School of Chiropractic. He is focused on becoming the third chiropractor in the family and could be a part of “the greatest spectacle in racing” by being the “first chiropractic-sponsored car driven by a second generation future chiropractor”.

Brandon will need strong backing and financial support to achieve these lofty goals. With all of the skill of an A.J. Foyt and the charisma of a Dan Wheldon, he is poised to garner that support. It will be a huge story for an Indiana-born and raised, grass roots driver to elevate to the most famous race on the planet and his fan base will explode as they find him to be a most humble, but most deserving, young talent. After a short meeting with him, you will agree that he is an extremely centered and grounded young man with full comprehension and respect for his God-given talent and finely tuned ethics.
A race driver is one of the most competitive athletes because there is only one winner at the end of the day, and every other place is second best. The best drivers not only possess great skill, they also understand what it takes to continue each day and how important those around them are to their success. Brandon embodies what every young driver wishes they could obtain and, given the right opportunity, he could achieve what so few ever get to attempt: drive in the Indianapolis 500!
Beneath the “quietly focused” exterior is an endearing subtleness. How many racers admit to cuddling with an 80-pound yellow Labrador? “Reggie” is his lucky charm and most loyal fan, purchased just before Brandon’s first win in the Firestone Indy Lights race at Homestead-Miami Speedway. Since that victory, he has been on the fast-track to the Indianapolis 500, racking up laps and experience in racing’s closest wheel-to-wheel competition. No doubt, he will become a bigger fan-favorite as his exposure in the sport continues to evolve. He treats every fan he speaks to with the respect and compassion he shares with his crew and his family, for they share in his experience as well.
Following the philosophy of one of his mentors, Dan Wheldon, Brandon exited a race car, exhausted from a hot summer’s day and a hard-fought 100-mile event only to take the time to shake hands, sign autographs and pose for pictures from the dozens of adoring new fans he had just created. He finished eighth that day, but one would have thought he had just won the biggest race of his career because he knew how important it was for those fans to share a moment with him.
He wanted to share one of his proudest moments with them. For doctors interested in improving their practice’s performance and marketing efforts, visit www.chiroracing.net/info.  The website has information on becoming a ChiroRacing member doctor. Membership includes information on marketing and running your practice that is used by top performing doctors. The sponsorship goes toward supporting the ChiroRacing team with the goal of promoting the chiropractic profession.
Dr. Wagner began his Chiropractic career in Indiana in 1975 after graduating from Palmer College in Davenport, Iowa. He and his wife Shari have three children: Nick, Julia, who is currently attending Palmer, and Brandon, who is currently fulfilling his requirements to attend Palmer.