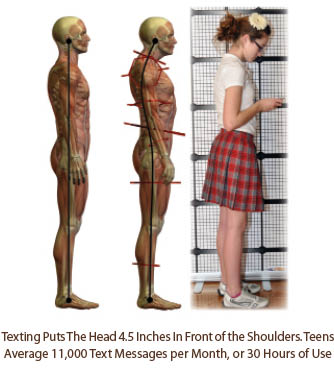 Consider the conclusions from two recent studies:
“A significant linear trend for increasing sagittal plane postural translations of the head, thorax, pelvis, and knee was found in children age from 4 years to 12 years.”1
“Poor posture was diagnosed in 38.3% children, more frequently in boys. A significantly different occurrence of poor posture was found between 7-year-old and 11-year-old children (33.0% and 40.8%, respectively). The most frequently detected defects were as follows: protruding scapulae (50% of all children), increased lumbar lordosis (32%), and round back (31%). Children with poor posture reported headache and pain in the cervical and lumbar spine more frequently.”2
Study after study is validating what chiropractors have been seeing for the past decade or more: Children at a younger and younger age are seeking relief from adult type pain and discomfort. What could be the cause of this increased frequency of young patients seeking care? The author believes it is the result of sociological and technological pressures that have only developed within the past generation, the Tweet Generation.
It began in the early 90s when schools eliminated lockers and required children to carry their lockers in backpacks. A couple of years later that child began playing handheld video games. Next came the cell phone for kids with affordable family plans. But the child didn’t use the phone to make and receive calls. They used them for texting. Massive amounts of texting. The author’s 11-year-old daughter sent out 11,000 text messages in one month.
Next we go back to a change made at the school level. As the Internet expanded so did the reliance of schools on the Internet as a method of delivering content. So, as a result, time in front of a computer at school and at home was required.
The connection between all these activities is clear: Since the early 90s children from the age of nine up through young adulthood, their musculoskeletal formative years, have engaged in activities that create a Forward Head Posture environment. These activities have literally molded their bodies into an abnormal posture profile. Re-read the conclusions of the studies cited at the beginning of this article. For those readers not yet alarmed at those conclusions, consider these other studies.
What is being done to raise adult awareness of this growing trend in children? Not much. Every State requires a school scoliosis exam. During a school scoliosis exam a child is also examined from the side, but only to observe evidence of gross kyphosis. And in most States that part of the exam is not mandatory. Studies have shown that 4.2% of the children screened for scoliosis trigger a referral for radiographs. And of those 4% only a small fraction will require advanced treatment. It appears that nobody is educating parents and schools about the 30% of children in that same age group that are experiencing Forward Head Posture and its effects.
Forward Head Posture Epidemic

While developing a new posture grid for school posture exams, the author placed a typical middle school youth in front of the grid and asked the youth to send out a text. It was discovered that the head was placed in a position 4.5” in front of the shoulders and placed the shoulder joints in internal rotation. The typical youth can text up to 30 hours per month.
Combined with other technology and social stressors, today’s youth is at a greater risk for “molded” forward head posture than any past generation.
Considering the important immediate and future health ramifications of poor posture, accurate posture exams and counseling with parents, children and schools should be a part of every wellness practice.
The author recently examined over 1,000 posture exams from a single office. Using sophisticated posture analysis software, deviations from normal were calculated and charted.
“16 years ago I estimated that 80% of the population had FHP. I was surprised and concerned to learn that in such a large population the number was 96.5%”
The additional mechanical loads from FHP stress and eventually break down the spine, disks, muscles, etc. In other words, FHP could be the CAUSE of patient complaints.
There are several methods of identifying FHP and systems available for correction.  For additional information about these options contact the author.
References:
Joseph Ventura D.C. is owner of PostureSoftware.com, a 32-year-old company that develops software and marketing strategies for the chiropractic profession. Dr. Ventura can be reached at (888) 713-2093 or at [email protected]